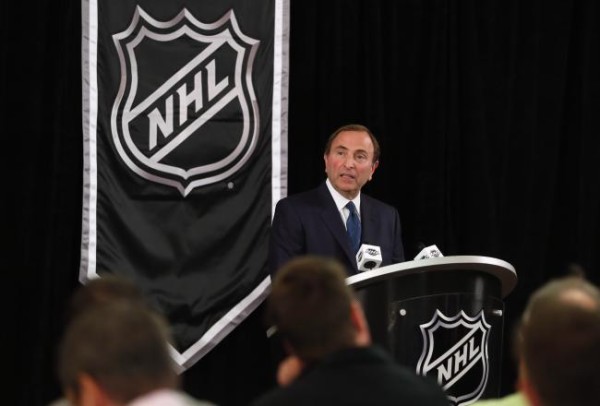 There's this prevailing idea that if it isn't the NFL and/or it’s not on ESPN, people don't care. It's quite possibly the most short-sighted, ignorant idea in sports, but it lives because of an equally more frustrating thought: that one’s sporting interests are like being in cliques in high school.

Hockey fans have been pushed aside by not only the so-called cool kids, but even more by those trying to ride their coattails to popularity. They’re not noticed until they are embarrassed through no real fault of their own.

Here’s the thing, though. As sports fans, especially those who can actually appreciate more than one sport at once, there should be a lot more empathy for NHL fans than what apparently exists.

For those who haven’t heard by now, a study from Level5 has gotten a lot of attention from the hockey and sports business communities at-large. Sparing you an explanation and even a cynical eye on the methodology involved in the study, what most readers – including mainstream media – caught on to was the growing apathy towards the league, even in Canada. While this is being used as a way to reveal the deep impact of this still-ongoing lockout, it’s unfortunately another proverbial nail in the coffin, if you listen to the people who already dismissed the NHL and the sport of hockey.

And if you are to believe infamous Twitter user/ESPN sports business reporter Darren Rovell, “there will be virtually no consequences from losing a season,” if it gets to that point. It’s a "niche" sport, after all, and while its fans will return, the mainstream will go on ignoring it.

[Funny that despite serious golf and tennis having equally, if not smaller, rabid followings and just as many economic issues, hockey is given the dismissive "niche" label because of these exhausting labor fights. Hockey gets this treatment because some people have decided that the results of informal “A, B, C or D” Twitter polls reflect the pulse of every single sports fan in America.]

From the jump, the NHL lockout meant very little to the people that were already not paying attention. Yet, for many more than you’re led to believe, this lockout still matters not just because there are some absurdly talented athletes unable to earn their keep or that there are some owners (certainly not all) whose wallets and hearts actually do want to play on. It’s not just because arguably the best in-person experience in sports is being withheld or jobs from teams, broadcasters and arenas have been shed without attendance or viewership.

The NHL lockout still matters because this is still sports. It’s easy to lament the idea that this labor strife is about men who play "a kid’s game," but be for real: Millions of people don’t huddle around their TV sets or scour StubHub to watch anyone play "Duck, Duck, Goose." The communal connection created by the local team will be a challenge to rebuild thanks to the stunted progress between the league and players. The finances, in turn, will be even more difficult because fans and business don’t trust the people who create the product.

For you hockey fans, your anger is relatable. A year ago, despite the now almost-comical agony, NBA fans were not only happy to have their league back in action, but it returned in a huge way thanks to a triple-header that began with a thrilling Knicks victory over the visiting Boston Celtics. Even in what became an injury-filled, chaotic 66-game season, the very idea that the NBA wouldn’t have a season frightened us because we remember what you went through in 2005.

Despite the bizarre hockey vs. basketball debate that ensues from time to time, you don’t deserve to watch the premier league in the world tear its remaining visibility to shreds. You certainly don’t deserve this after some scintillating seasons since the last labor impasse, some of the most amazing Winter Olympic moments in history, and your annual captivating Winter Classics and Stanley Cup runs. And even for the many of you that follow the NBA, you remember how trying it was last year to keep up with the league’s best from disparate parts of the world as they waited for a new CBA.

The National Hockey League and its players will eventually come to some agreement, whether it’s to salvage some part of the season or scrap as they did close to eight years ago. You didn’t ask for this, and for that, you deserve much more than tone-deaf articles claiming that no one cares.

3 Replies to “Locked Out In Arms: An NBA Fan Suffers For The NHL”