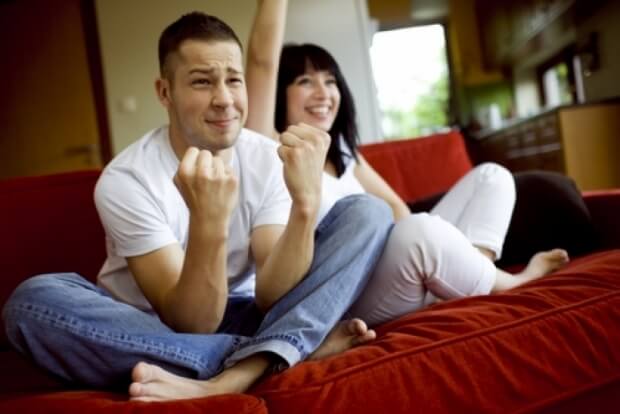 The other day, a young and beautiful woman asked me why some men will not engage in romantic activity while a game is on television. I think her exact words were like, "It's not like he doesn't have a DVR. He can watch it later or rewind all the things he missed while we take care of business. What kind of man turns down a chance to be with his woman for a game?"

As I thought about her situation, I began to picture myself in this situation, and I am about 99% sure this one can be resolved rather easily.

First of all, you two need a set of rules to live by. When I say this, I mean that there is an unwritten code that must be abided by. The first is that men are creatures of habit. We have a few dates and times that are sacred to us. So let me preface this by saying that every game is not the same. Men can and will be interrupted during a game for relationship resolution. The problem lies when it’s that special game. You know the one that you have known about for four-to-five weeks, because that is all he and his boys have been talking about for the past four-to-five weeks.

You have had plenty of time to plan around that day as well, and lets be quite honest: the fact that you are willing to steal that man’s joy says a lot about you as a woman. You are trying to take something that the man has looked forward to, like a kid at Christmas, for self-satisfaction.

Now, don’t get it twisted; some men, like myself, don’t have barriers. I can remember missing an entire Super Bowl because this chick called me over. I was as smooth as Desmond Howard on that day. I showed some endurance like no other time in my life. There was no doubt I was the MVP of this performance. It also didn’t hurt that I was in the best shape of my life. The next year, we decided to miss the Super Bowl again and have a reunion. I remember, because my performance that night was as good as the one John Elway put on. I was all over the place, throwing my body around the room, diving over the pile and scoring every chance I had. Oh, wait; I’m off-topic.

There is, however, a point of compromise.  Let me help you with your problem:

Scenario --- He is watching the National Championship game and you suddenly get in the mood. You are hot and ready, and he is locked in on the game. Approach this situation with caution. It is football season and we all know that football (his first love) has the longest halftime intermissions of all the sports out there, so time it up well.

Make your move around the two-minute mark of the first half. Pay attention to his mood.   If his team is winning, then you are in good hands. Go and grab a jersey of his, if he played (that is always better, 'cause he will know that you are thinking about him and not the guys on TV.) That is all of the clothing that is required. Grab a ball and stroll into the entertainment room. Parade around in that jersey for a while, bend over in front of him to give him a peek of the goodies, and hike the ball to him. Tell him that the real game is about to start in the bedroom, with or without him. If he is a real man, he will come either for the show, or he will be the show.

Sidenote: this is going to be a pounding, 'cause he knows, like you do, that halftime is only 20 minutes, but you can use it as a warm-up for the real heat that will go down after the game. Who knows? His team may get the big lead, causing him to come back for more a little earlier. At that point, you are the real winner.

Bottom line is you have to know when it is okay to barge. If you aren’t sure, you can almost ask any sports-loving women that you know what they are doing that night. If they say watching the game, you know it’s a big game, because women sports lovers don’t watch garbage.

4 Replies to “Ladies, Bowl Season Is Approaching. Let Me Help You Get Yours, Too”