You may have flipped over to TNT out of habit, expecting to see Lebron and the Heat take on Derrick Rose and the Bulls. They aren’t there. Instead, it’s probably a rerun of "The Closer."

"This is absurd," you think. The only closer you’re interested in watching is Kobe.

You flip to the worldwide leader, and there’s a E:60 about some college athlete who is playing two sports. It’s uninteresting. You can’t stand the segment of people in a room faking a board meeting.

NBA TV is running the 1987 dunk contest, but you’ve seen that too many times. You wonder why Tom Chambers was invited to the competition. You may clown him on Twitter with a few pals, then shrug.

Nothing’s on TV. You’re a sports fan, and you’re in purgatory.

Last night, you watched a MAC football game, because it was the only thing on the tube. It hurts. You miss watching Amare yamming on Kris Humphries. All you want is to see Zach Randolph get another double-double.

At this point, you’d even watch the Kings lose by 20 to Phoenix. 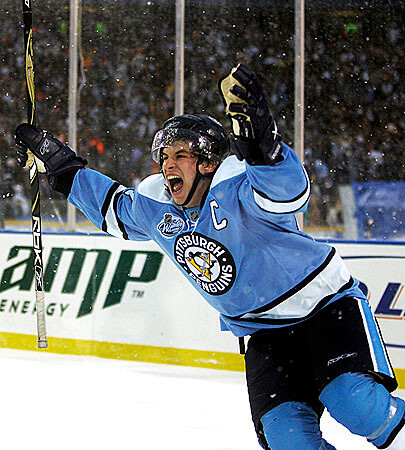 What the lockout has done to your life is far bigger than what it has done to the sports world. You’re in your own fishbowl, and at this point in the year, you’ve grown accustomed to the hardwood scenery.

But you don’t realize that this is an opportunity. If you can find VERSUS on your dial, hockey’s on.

You don’t watch hockey; maybe once or twice you have. Maybe you’ve tuned into the Stanley Cup Finals, out of curiosity. Perhaps the backend of SportsCenter showed you a brief highlight or two. Top ten plays probably had a game-winning overtime goal somewhere around #6.

There have been plenty of reasons to flip the channel past hockey for years now. The rules are complicated to understand. You never grew up ice skating as a kid, or maybe you live below the Mason-Dixon line and have never been to a rink.

It’s a foreign quantity. You see Russians and Canadians on the ice, and the Americans that play don’t ring a bell to you. It’s all understandable.

Why not tune in?

You’re a sports fan; you love the thrill of the last moments in a tied basketball game. The game-winning drive in football has your heart racing, and the walk-off home run reminds you why you started watching in the first place.

Play it in the background and you’ll start to pick up on some things, the nuances of the game. You’ll find out what ‘icing’ is and why two players can fight while the officials simply watch. Catch a few games and you may find out you’re a fan. The intrigue may reel you in. You may love it.

But you’ll never know unless you give it a try. And 'try' is used in the way that you 'try' to ride a bike, not ‘try’ to make plans with an old friend that you don’t want to see.

With the purgatory of the NBA lockout looming all around you, it may be a good distraction. For a few hours, you may forget who Tom Chambers was. That’s not a bad thing.

Deep down, you’re a sports fan. You’re classified as an NBA fan, because you prefer to watch it, but it’s not exclusive.

There’s a chance you’ll flip to watch some hockey and give it a chance. When you give it a chance, you may hate it. To each his/her own. But you may love it, and it may shock you when you do.

If you don’t give it a chance, a fair chance, you’ll never know.

You’re still tired of reruns and no NBA and you should be. There are hockey fans who know exactly what you’re going through right now.

Flip the channel, give the sports fan that you are a chance to learn the game.

Besides, what else is on?