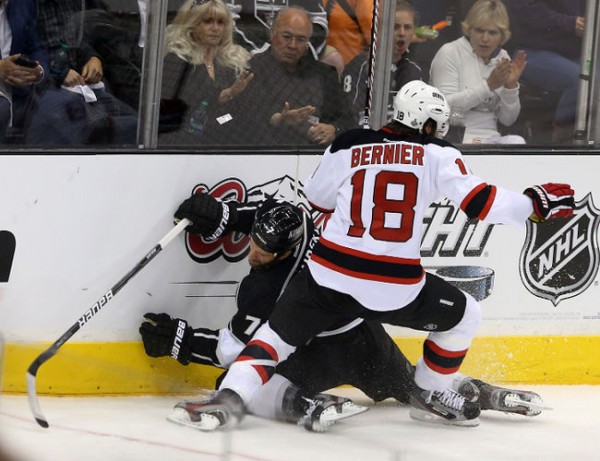 He hit him from the back, smashed his face into the glass and created a nasty cut on Scuderi's mug. It was a five-minute major penalty and a game misconduct. It was just about halfway through the first period.

It was also effectively the end of the series and the 2011-12 NHL season.

A five-minute power play can be a death sentence. The Kings were the judge, jury and executioners on the man advantage. They scored three goals and put the game out of reach early en route to a 6-1 win.

And Bernier? He sat in the locker room and most likely overheard the jubilant screams of the Staples Center crowd.

The Kings were the best team in the playoffs by a wide margin. They deserved the Stanley Cup, and they got what they deserved. Justice existed in the final result, as it usually does in a long and grueling elimination tournament.

But, the Kings are the large umbrella and Bernier is the bystander left standing in the rain. He will be a goat for a while, and rightfully so.

There are times when fans and observers of sports are too hard on an individual. Sure, no player sits in a locker room before the game and comes to terms with screwing his/her team over in the season's biggest game. It's not drawn up and executed.

Everyone makes mistakes, and Bernier was no different. Bill Buckner made a mistake, as have many others. Some do it on the biggest stage; all of them do it somewhere else.

The humanitarian reaction to Bernier's play is to overflow with empathy and sympathy. How terrible Bernier felt in the locker room or after the game cannot be overstated.

His offseason will be hell. Hell, the rest of his career might be hell. There's the distinct possibility that he never gets over his fault and it eats at him forever.

Even if he goes on and wins a Cup for himself in New Jersey or somewhere else, the cast of characters will never be the same. He'll know he let down the 2011-12 Devils team in a big way. He hung them out to dry.

Many who have played competitive sports have felt it before. There's always something they want back, always a free throw that rimmed out or a touchdown that was dropped. It's human nature to make mistakes, and the overwhelming  mistake in a professional championship makes it seem extremely unfair to the player in question.

A professional athlete has a job to do, and the responsibility that comes with that job includes not taking five-minute penalties in the Stanley Cup finals. That's the bottom line, and if players want to be celebrated for their successes they too must be acknowledged in their faults.

There's little doubt that Bernier will take his lumps with courage and integrity. He'll answer the call and take ownership for what happened in the first period of Game 6.

That doesn't mean he should be let off the hook. Just as a brilliant goal that wins a game in overtime is celebrated as the game's turning point, a dumb penalty that turns the game must also be accentuated.

It's not necessarily the kindest and most humane thing to do, but sports aren't necessarily humane and kind. Someone wins and smiles; someone loses and cries.

It's life and it's sports.

6 Replies to “Steve Bernier Assists The L.A. Kings To The Cup”