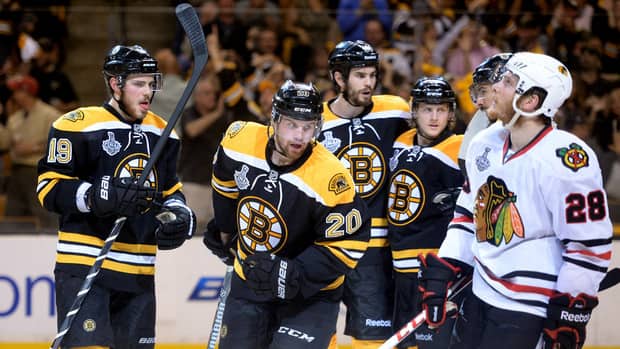 It was Socrates who said, “A wise man admits he knows nothing.” In accordance with the philosopher, the first two games of the Stanley Cup Final made a lot of wise men out of hockey fans. Hit posts, missed chances, sudden shifts in momentum and timely goals left the Boston Bruins and the Chicago Blackhawks in a 1-1 stalemate after nearly 10 periods of hockey. Maybe we should’ve expected as much from two teams who hadn’t met in nearly two years.

But Monday night, the Bruins wrestled the series away from the once dominant Hawks. Marian Hossa left the warmups injured, and with him went Chicago’s hopes of a win. Tuukka Rask and the B’s shut out the ailing Hawks in a decisive 2-0 victory.

Rask has asserted himself as the Conn Smythe leader in the clubhouse, but his two best teammates deserve equal recognition for taking control of the series. No defenseman in the league uses his skill set better or more intelligently than Zdeno Chara. The Slovak stands nearly seven feet tall on skates and possesses a slap shot that travels well over 100 miles per hour. But it’s one thing to be big and quite another to be big and good. Chara succeeds against talented forwards because he takes up the right space.

Stand at the front of the net at your own peril. Enter the corner against Boston’s captain and pray you don’t bruise. Hawks fans might clamor for a Jonathan Toews-Patrick Kane-Patrick Sharp line to draw Chara’s attention away from their own captain, who is scoreless mind you, but in doing so they risk a dangerous tradeoff. Chara doesn’t play man-to-man so much as he plays the entire zone. With his reach, and physical intimidation, he neutralizes entire forward lines, not just individuals. “The Mountain that Skates” had a typically dominant game Monday night: an assist, four penalty minutes, several big hit and a slew of subtle crosschecks to the back of anyone who dared enter his domain.

Up front for the Bruins, Patrice Bergeron has been equally as good as his towering defenseman. In addition to his scoring — game-tying and winning goals against the Leafs in game seven, OT winner in the pivotal game three against the Penguins and the opening goal Monday night — Bergeron wins faceoffs at an incredible rate. In game three, he won an astounding 85% of his draws. In other words, opposing teams won’t have the puck against Bergeron and they’ll rarely score. He’s been even or better in 16 of 19 playoff games.

Boston was easily the better team in game three and thus has been the better team in the series. However, I can’t help but think that the Bruins are benefiting from some extenuating circumstances. The Blackhawks’ success both in the regular season and the playoffs has come from their tremendous team speed. All four of their forward lines can really skate, and their defensive corps is easily the best skating group in the NHL.

Which brings me to the ice conditions in TD Garden, which are, in a word, dreadful. As pucks started to bounce in the Pittsburgh series, I wondered how the surface would hold up in mid June. It hasn’t. The humidity of the Northeast has the vulcanized rubber dancing like Mark Madsen. On top of that, the softer ice has partially robbed Chicago of its skating advantage.

Now, this doesn’t explain away the Hawks’ atrocious power play, but it does raise a serious concern. Game three showed us that Chicago can no longer skate its way past Boston as it did against Detroit and Los Angeles. The weather is simply too hot, and the Bruins are too good with Rask, Chara and Bergeron playing the way they are.

Boston will win its second Stanley Cup in three seasons if game three is any indication of things to come. Then again, the Blackhawks may yet make a wise man out of me.