If you've been keeping up with my work here at TSFJ you probably know a) I like sports and b) of said sports, hockey and soccer are my two favorites. Forgive me, I'm white.

Not only do I enjoy playing these sports, but I enjoy watching them more than the others. I'm the kind of kid who was more excited about the Spurs-United/Flyers-Sabres double-header last Sunday than the NFL Conference Championships.

Watching these broadcasts as well as other NHL games this past week opened my eyes to what separates my favorite sports from all others: the play-by-play is so much better.

Now, this isn't to say that football, basketball and baseball commentary teams are bad. There's a vacancy in heaven's press box that Vin Scully will fill once his earthly duties are done. Until then, every Dodgers broadcast is a must watch, or rather, a must listen.

Gus Johnson could make a game of “Go Fish” compelling television: “Any twooooos!?! Ohhh! Go fish!” Although I don't agree with the metaphor, Johnson is almost solely responsible for making the “Cinderella” term stick in March Madness with this call.

But these men, Johnson, Albert and to a lesser extent Velgersdyk, are a select few that distinguish themselves from a muddled pack. English soccer announcers, however, routinely provide lessons on proper commentating as well as the spoken language itself.

ESPN's Ian Darke had me leafing through the Oxford English Dictionary when he described Arsenal as “somewhat acrimonious.” Ditto for when a central midfielder provided a “languid” touch on the ball.

Darke, Martin Tyler, Clive Tyldesley and company narrate the game as if it were theater of high drama, and frankly it often is. When 18-year-old Tony Watt put Celtic ahead 2-0 against Barcelona in Glasgow, announcer Ian Crocker erupted with the Scottish crowd.

If the over-the-top poetics of Crocker don't do it for you, perhaps you prefer the coolness of Martin Tyler. After his partner Andy Gray went berserk following Steven Gerrard's wonder goal, Tyler uttered a remarkably obvious yet understated line : “You'd take a tap-in in these circumstances.”

Sometimes innocuous moments inspire great commentary, like when Tottenham Hotspur fans started flinging snow towards the pitch against Manchester United. The British announcer remarked, “It's not very clever to throw snowballs.” You just don't get that kind of language on this side of the pond.

While soccer announcing is an exercise in erudition, the top hockey guys bring a certain colloquialism to the Canadian game. Pierre Maguire rubs many people the wrong way with his know-it-all smugness. Seriously, I'm half glad I never reached the NHL if only because Pierre would tell everyone about the five stitches I earned cracking my head on a Lysol can at age 14. 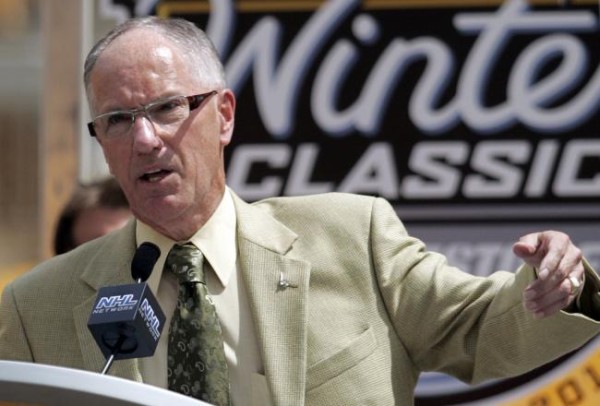 Luckily for us, Pierre is only the sidekick to the American voice of hockey, Doc Emrick. Emrick is both eloquent and approachable with playful improvisations that endear Doc to the common man. Players don't kick the puck, they “soccer” it. Any save with the blocker is a “waffleboard stop.” When the goaltender knocks the puck from his crease area with said blocker, he “waffleboards it away.”

Like soccer, though, it's the authentic voice that I prefer, see: Canadian. CBC's Jim Hughson and Bob Cole are the best in the business. Hughson's calls of Vancouver Canucks games are particularly appealing. Like a proud father or a close friend, he refers to the Sedin twins as simply Daniel and Henrik. “Daniel to Henrik, back to Daniel, now to Henrik” is a common utterance during the broadcast.

Hughson also has a feel for the moment. In the 2011 playoffs the Canucks finally vanquished the Blackhawks after losing to Chicago in the previous two postseasons. “Finally ... for Vancouver, it's a wonderful day for an exorcism,” Hughson declared after Alex Burrows buried the Game 7 overtime winner.

Cole offers a more homely play-by-play than his CBC colleague. He sounds more like a privileged fan than an employed broadcaster. After a big goal, Cole will drop a “Whoa, baby” or a “Whoa, my,” and is known to declare “This is Hockey, baby” during particularly exciting game play.

In a little over a week the major sports season ends as we know it. That is, unless you're one of those nuts who argues tirelessly over who will go where in the NFL draft. But if you prefer bock drafts to mock drafts, I suggest you grab one and catch a hockey or soccer game. You might like what you see. I know you'll like what you hear.

5 Replies to “Soccer And Hockey Do It Better: A Commentary On Commentary”