Philadelphia Flyers winger Scott Hartnell and I have a history. Well, that's not entirely true; in fact, Scott Hartnell has no idea who the hell I am. But I know Scott Hartnell, and I certainly have my own personal history with him.

You see, ever since the Flyers acquired Hartnell in 2007, he has driven me crazy with undisciplined play. The guy seemed to spend more time off his skates and in the box than around the net and in the corners, and I just couldn't stand it.

In hockey, stick penalties are largely considered the most lazy of all penalties. They're the result of lunging and/or swinging the stick instead of moving your feet. During his first three seasons in Philadelphia, Scott Hartnell was the king of the stick penalty. Time and again, you'd seem him sent to the sin bin for a senseless hook or a slash or a trip, putting his team in a bad position. Then he'd take a stupid retaliation penalty when his team really couldn't afford it. Standing up for yourself and your teammates is all well and good, but there's a time and place for everything. Hartnell never seemed to know when that time or place was.

What made it so maddening is that the talent was always there. That much was abundantly clear. Prior to becoming a Flyer, Hartnell had back-to-back 20-plus goal seasons in Nashville, and kept that pace going in his first two years in the Orange and Black, scoring 24 and 30 goals respectively. But that undisciplined play led to far too many penalties and just as much, if not more, bad than good.

In his third season as a Flyer, it all came to a head. Hartnell's goal-scoring dipped to just 14 goals. Suddenly, he was a minus player. And he couldn't stay on his feet or out of the box. I had had enough. As trade talks heated up when the Flyers went into a late-season tailspin, I was hoping and praying Hartnell would waive his no-trade clause and get shipped out of town.

Then a funny thing happened that no one saw coming. The Flyers backed into the playoffs thanks to a shootout victory over the Rangers on the final day of the regular season. From there, the Flyers disposed of the Devils, did the unthinkable by overcoming a 3-0 series deficit and a 3-0 game 7 deficit to beat the Bruins, and outlasted the Canadiens to get to the Stanley Cup Final, before being bested by the Blackhawks in six games.

During that improbable Stanley Cup run, the best line for the Flyers was the trio of Danny Briere, Scott Hartnell and Ville Leino. Leino had come over in a midseason trade and actually was a healthy scratch when the postseason started. Then he became an integral part of the Flyers' run. And he, along with Briere, was the guy who helped Hartnell rein his game in.

Something changed in Hartnell during that postseason. He stopped taking stupid penalties, started moving his legs and flourished. Finally, it all clicked, and he began to carry that over last season. 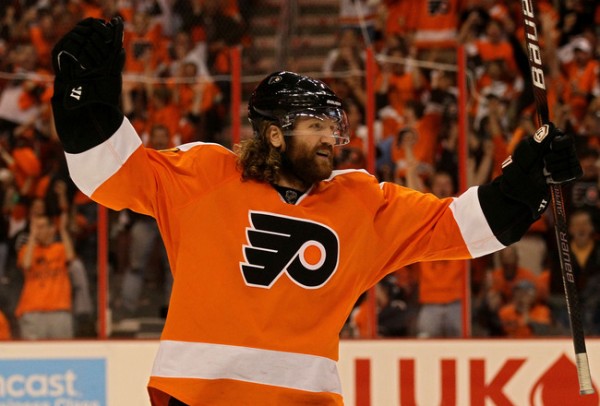 Sure, the occasional bad penalty was there, but for the most part, Hartnell played more disciplined, more sound hockey. He put up his lowest penalty minutes since becoming a Flyer, regained his scoring touch (25 goals) and became the physical presence on the team's most dynamic line.

And this year, Hartnell is having by far his best season ever, playing the smartest, most determined hockey of his career. All this after barely seeing the ice during the first two weeks of the season because Flyers coach Peter Laviolette didn't like what he was seeing out of him.

The old Scott Hartnell, the one who first showed up in Philadelphia, probably would have responded to his early-season benching by getting in more fights and taking out his frustrations with his stick. But that's not what Hartnell did. No, instead he worked his ass off, earned a promotion to the Flyers' top line with budding superstar Claude Giroux and future Hall-of-Famer Jaromir Jagr, and now has become a bona fide leader and much-deserving all-star.

Instead of leading the Flyers in lazy stick penalties, he leads them in goals, plus/minus and shots. He's second on team in points behind Giroux and second in hits. And he leads the entire NHL in power play goals.

Just as important on a team that saw its captain shipped off in the summer and its newly minted captain lost for (at minimum) the season to a concussion, Hartnell has become the leader of the team. Yes, Claude Giroux is the star and the unquestioned best player, but it's Hartnell who everyone follows. He's the guy who sets the tone with his physical play, his yapping, his goal-scoring, even a fight every now and then.

He's not the same the player who always seemed to be down on the ice and taking senseless penalties. He's changed for the better. Maybe it's maturity. Maybe it's the coaching and pushing of Laviolette. Maybe it's just Hartnell finally putting it all together.

Whatever it is, it's proof that a player can change for the better if he puts in the work. Scott Hartnell has, and both he and the Flyers are better for it. So is my own personal relationship with the guy.

2 Replies to “Scott Hartnell: Proof that Players Can Change”