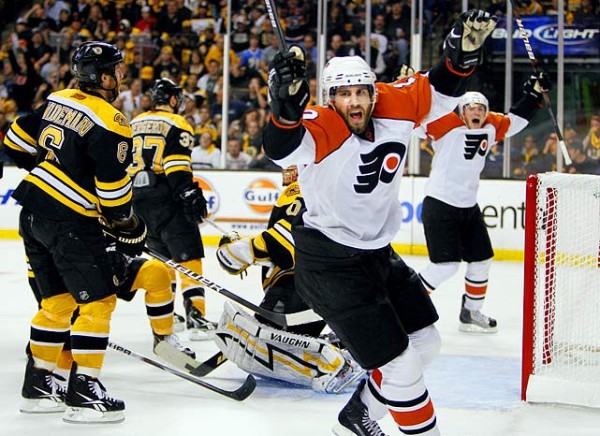 My senior year of high school I named a resilient housefly after him that refused to die in Mrs. Frankowiac’s Economics class.

He scored a hat trick in a poem I wrote in 8th grade, which would give him four for his career.

I took his first name as my own in sophomore year Spanish.

I molded his likeness out of clay in middle school art. The piece fell from my dresser more than once, proving to be as fragile as the player it resembled.

We as sports fans have our guys — athletes we claim as our own despite widespread adulation from the masses. Simon Gagne was my guy. In 10 seasons with the Philadelphia Flyers, Gagne scored 20 or more goals seven times. Twice he scored 40.

His teams made the playoffs nine out of his 10 seasons in Philly. Gagne played in four Eastern Conference Finals and a Stanley Cup with the Orange and Black. He won a gold medal with Canada at the Salt Lake City Olympics at the tender age of 21. He was Canada’s youngest player.

Gagne sparked the famous 3-0 comeback against the Boston Bruins in 2010 with the overtime winner in game four. When the Flyers rallied to tie game 7 at 3-3, it was Gagne who buried the most important non-Stanley Cup goal in team history.

I loved Simon Gagne not only because of his terrific play, but also for his demeanor. As a youngster on a veteran-heavy team, he kept his mouth shut and his feet moving. His lowest point total of his career in 2003-04 did little to dampen his spirit. Instead, there he was in game 6 of the Eastern Conference finals, firing a rebound off the Lightning’s Nikolai Khabibulin to force a pivotal game 7.

Although the Flyers would lose the series, it’s Gagne’s overtime winner that resonates in my mind.

I loved his subdued celebrations. Even in the biggest moments, he’d raise his arms almost sheepishly and quickly find his teammates. His smiles were brief. Humble to the last second, never ostentatious, talented and understated – he was the only athlete I truly wanted to be.

Never was my admiration for Gagne stronger than in the darkness of 2006-07. The Flyers lost 48 games, by far their worst season in team history. And yet there was Simon, scoring 41 goals for the last place club. Amazingly, he finished the season with a +2 rating – my favorite Gagne stat.

My appreciation for Simon goes deeper than numbers, style, wins or losses. Sure, I loved watching him burst down the left wing, his number 12 sweater neatly tucked in his breezers, rippling with his speed but never breaking loose. Like Gagne himself, even in top flight it was always in control. The image gave him an elegance that few have replicated, at least in my mind.

It was about timing. I moved to Minnesota from the Philadelphia area when I was 9 years old. I brought my loyalties with me, but even at that young age I understood that a chapter in my life had just ended. Concussions destroyed Eric Lindros’ career. Back ailments caught up to John LeClair. Mikael Renberg was long gone. The days of the Legion of Doom ended before I hit third grade.

There I stood, a stranger in a Northern wilderness, loosely holding on to the heroes of my childhood, hesitantly looking towards the future with only glances to the past. Then Simon arrives on the scene. We grew up together in perfect symmetry. He, playing his first 10 years of an NHL career, me, finding my way through adolescence and into adulthood.

I was 10 when he made his debut. I was 20 when he played his last game in the Orange and Black. At the risk of melodrama, I will say Gagne’s trade in some ways ended my childhood. He found a home in Tampa, and I bid him adieu. I wished him well.

He left me with a handful of regrets. The injuries robbed him of his prime. For all of the memories, how many more were stuck on the injured reserve? And we never won it all.

Yet, I watched with pride as he finally hoisted a Cup with the Los Angeles Kings last season. Again injuries limited his action to 34 games. But there he was at the end. That smile that had only made cameos in years past split his playoff beard in inexplicable joy. He had received the famed trophy third, a sign of the respect the player has earned after all these years.

I put all of this to words today to commemorate my guy’s return. Simon Gagne is a Flyer again. Tonight I will sit in the press box of the Wells Fargo Center and do my best to stay professional in the stoic community.

I can’t promise I won’t get emotional. He will take the ice in his number 12 orange and black sweater, and circle the familiar rink as 20,000 serenade him once again – a victory lap for Simon Gagne, for me.

One Reply to “Fan Favorites: Simon Gagne Is My Guy”

Hockey Matt Cooke Should Be Banned From The NHL
1