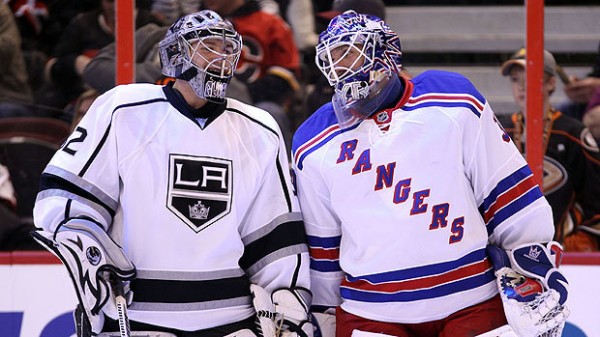 The NHL, ever growing in popularity, has reached the semifinals stage of its fantastic Stanley Cup Playoffs.

In the Eastern Conference, the New York Rangers lead the New Jersey Devils, 1-0. Out west, the Los Angeles Kings lead the Phoenix Coyotes.

That's a good thing. Make no mistake about it, the NHL needs L.A. and New York in the finals.

Last season, the league experienced fantastic viewership when Boston and Vancouver met in the finals. The ratings were good enough to change the mind of the NHL on letting a Canadian team play in the Winter Classic, the sport's highest exposure matchup. Next year, Detroit will host Toronto in the event at the big house in Ann Arbor, MI.

The year before, big market traditional powers Chicago and Philadelphia met in the finals. Once again, the ratings were pretty darn good.

In the two years prior, superstar Sidney Crosby faced off against Detroit, a tradition-filled franchise. Suffice to say, the NHL has had a lucky streak of fantastic matchups.

The league has parlayed those matchups into a new TV deal with NBC, more exposure, and more fans than ever before.

An LA/New York series would simply be more snow to the giant ball that's rolling.

In any league, the prospect of those two markets meeting in the finals would be tantalizing. Dodgers/Yankees or Knicks/Lakers would bring big dollars to the MLB and NBA, respectively.

It's a no-brainer from that aspect. On the flip side, it's the possibility of the other two semifinalists making the last round that makes the Kings/Rangers Cup final so important.

The Devils -a team located in a state that is littered (no pun intended) with Islanders, Flyers, and Rangers fans- often has trouble selling out their barn in Newark. For years, the team played a boring, trapping style that left a stigma  the franchise has had trouble erasing (they haven't).

Phoenix has fared even worse than the Devils. The team went bankrupt, lost ownership to the NHL, and has been the subject of every relocation rumor known to man. Quite frankly, the Coyotes have been in the center of a trash heap in terms of popularity and profit.

Although they've continued to be a steady presence in the Western Conference, there's little to suggest non-partial observers will care to see them in the finals.

While either of the big market teams remaining will still carry some of the viewership weight that the NHL needs, both would be best.

The storylines write themselves. Both teams have incredible goaltenders. New York came into the playoffs as the top seed in the east, L.A. the lowest seeded team out west. It's Broadway versus Hollywood.

With the growth the NHL has experienced, the further addition of that matchup would be the proverbial cherry on top.

It doesn't take a brain surgeon to figure out what L.A. and New York mean to the amount of almighty dollars the NHL would reel in.

Looking at the other possibilities only makes it clearer.

The NHL needs you to win, Kings and Rangers. Don't let the Coyotes and Devils ruin this party.

4 Replies to “Hollywood Vs. Broadway: We Need A Kings Vs. Rangers Stanley Cup Final”