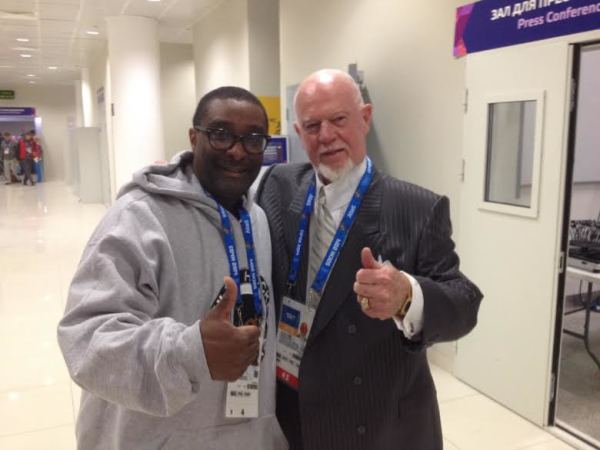 William Douglas doesn't dwell on negatives. Perhaps he picked up the trait covering Congress, his current occupation with McClatchy Newspapers – and it's certainly an occupation. Maybe it stems from teenage years spent in rinks across the Mid-Atlantic, where he was one of two black players in a league that stretched from Maryland to New York.

“People said some disparaging things to me,” the Philadelphia native recalls. “They called my parents names. My parents eventually stopped coming to games it got so bad.”

Douglas, standing tall in goal, was undeterred. As a kid, he spent his allowance on a pair of skates. He taught himself how to play at places like the Class of 1923 Arena at the University of Pennsylvania. A few ignorant fans wouldn't sour Douglas' investment.

“I didn't care,” he says of the abuse. “They could say what they wanted. I just was happy playing hockey.”

Now approaching 40 years since those days in dimly lit, tense arenas, Douglas shares his love of the sport on his website “The Color Of Hockey.” His journalistic background influences the levelheadedness he's retained from his upbringing. So, too, does his desire to educate others unfamiliar with the game.

It was the latter that pushed him to start the blog in 2012. Douglas watched as Washington Capitals' winger Joel Ward, a Canadian whose parents emigrated from Barbados, scored the overtime goal in Game 7 to upset the Boston Bruins in the first round of the Stanley Cup Playoffs.

Boston fans flooded social media with racial epithets directed at Ward. Most centered on the same notion: The Bruins were less of a team because they let a black player score on them.

The racism didn't bother Douglas — he cites Capitals owner Ted Leonsis who said the offenders possessed “keyboard courage” — as much as the stereotype. Did people not know the contributions players of color had made to hockey? Were they not aware of Grant Fuhr, winner of five Stanley Cups? Tony McKegney, who once scored 40 goals in a season? Anson Carter? Kevin Weekes? Jarome Iginla? Willie O'Ree?

“I thought people had learned about persons of color in hockey and their growing impact in the game,” Douglas says of the Ward incident. “I guess I was wrong. I thought it might be beneficial to educate.”

And so, Douglas launched his blog in the aftermath of Ward's series-clinching goal.

“I wanted to call it 'Hockey isn't just for white folks anymore,'” he jokes. But the jab didn't match his character. Nor did it fit the ethos of his new site.

“I didn't want to preach or criticize,” Douglas says. “I wanted to tell stories, to educate.”

His entry into blogging coincided with the rise of young, black stars in the NHL. P.K. Subban of the Montreal Canadiens won the Norris Trophy in 2013 as the league's best defenseman. Wayne Simmonds transitioned from a third line grinder in Los Angeles to a power-play specialist in Philadelphia. Emerson Etem and Devante Smith-Pelly debuted for the Anaheim Ducks. Dustin Byfuglien and Evander Kane, whose demographics better fit Atlanta, became household names in Winnipeg.

“I sort of fell into that,” Douglas says of the burgeoning influence of black players in the game. “Eight black kids were drafted in 2013 (including top-10 picks Seth Jones and Darnell Nurse). It got me paying attention. I looked at who was coming into the league and their families.”

What began as something small quickly grew.

“I didn't really know what blogging was,” Douglas says of the early days of the Color Of Hockey. “I'd write something and 10-15 people would read it, mostly relatives, and I'd be satisfied.”

The more he wrote, however, the more he saw his audience increase, first by the dozens and then the hundreds. Douglas became not only an authority on the black players in the game, but also an authority on the game in general. He has covered the Winter Classic. He's spoken with NHL commissioner Gary Bettman, a man he insists is “serious about the diversity in the league.” He's freelanced for NHL.com. Prominent hockey blogs on SI.com and Yahoo! routinely link to Douglas' work.

And with good reason. When Los Angeles Times columnist Sandy Banks suggested that disposed Clippers' owner Donald Sterling should “buy a hockey team” so “he won't have to worry about black superstars showing up for games on his girlfriend's arm,” Douglas offered a lengthy, measured but poignant reply.

“Reading that line saddened me, angered me and made me think that maybe I haven't been doing my job with this blog,” he writes. “Her suggestion that Sterling 'buy a hockey team' is a zinger ... perhaps designed to add a little levity to a serious problem. The only problem is that if Banks paid a little more attention to hockey maybe she'd know that the zinger has lost its zing — that hockey isn't exclusively white anymore, in the stands, in the broadcast booth or in the owner's box.”

Douglas goes on to list names familiar and foreign, playoff heroes Simmonds and Smith-Pelly as well as rapper Snoop Dogg and actor Cuba Gooding Jr., both hockey fans; he mentions Twitter users who live and die with the game. One is a Southern California woman who is raising her niece, a dancer, and her nephew, a hockey player, by herself. She tweeted out last December, “a coach just told me; I’m not rich, kid is black & So-Cal. #NHLDream unrealistic.”

The heartfelt response to Banks deviates from his normal voice, yet Douglas' purpose remains unchanged. He's there to inform. At no point in the piece does Douglas attack Banks personally. Rather, he encourages her to explore hockey before resorting to a stereotype long broken. You come away from the piece with the same feeling as you have when you read something more whimsical from Douglas, like his breakdown of the Jamaican Hockey Team. You find out something you didn't know before. You learn.

Douglas' relationship with hockey began as so many others' did, in front of a television in 1972, watching Paul Henderson take steps to immortality with the goal that won the Summit Series for Canada against the Soviet Union. That Douglas was a black kid in West Philly mattered little.

Since then he's brought the game with him wherever he goes, from the University of South Carolina, to Charlotte, to Atlanta. The closest rink to Douglas' Atlanta home was in Stone Mountain, Georgia. He'd drive by the Confederate monument on his way to the arena. The massive figures of Jefferson Davis, Robert E. Lee and Stonewall Jackson gave him a perspective Douglas keeps to this day. He's proud of the freedom he possesses, to pursue a career in journalism, while playing a sport he loves.

Douglas still straps on the pads once a week in Washington, D.C.

One Reply to “The NHL In 2014: An Introduction To William Douglas And The Color Of Hockey”