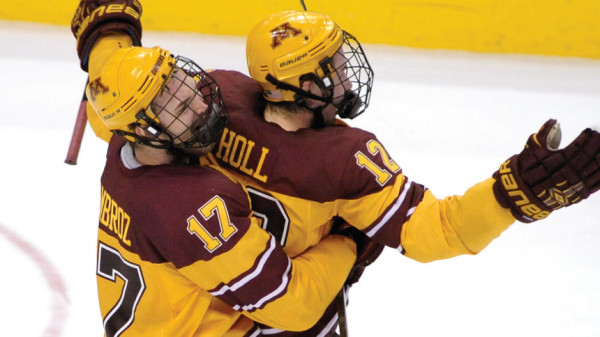 There are two sides to college hockey's Frozen Four. The name itself carries a youthful appeal and not just because a certain Disney movie has taken the country by storm. It's barely clever and overly cheesy, not quite fitting the young men who battle through tested opponents to reach the national semifinals.

But the fans could care less. The Frozen Four is distinctly theirs. They showed up in droves in Philadelphia and invaded the parking lots well before puck drop. A horde in a hodgepodge of sweaters, some from schools not even there including Penn State, Michigan, Maine, Denver, and Colorado College, gathered at an outdoor concert where the University of North Dakota cheerleaders were dancing on stage. It was a celebration of the college game.

And then there's the other side.

For 59 minutes and 59.4 seconds North Dakota had played a nearly flawless hockey game against their bitter rivals from the University of Minnesota. They had outshot the Gophers, limited their chances, and fought hard enough and long enough to draw a penalty in the closing minutes.

North Dakota went on the power play with 1:39 left in a 1-1 hockey game. They lost with 0.6 seconds on the clock. Justin Holl, a senior defenseman with zero goals to his name, fired a wrist shot off the left post of Zane Gothberg's net.

Timing is everything. A second less on the clock, and North Dakota survives to overtime. Had there been more time on the clock, they likely would have done the same. Kyle Rau won a defensive zone face off with 9.6 seconds remaining. Brady Skjei chipped the puck off the boards where Holl collected it near his own blue line.

Now here's where the time comes in. Had he been shorthanded with a minute left, Holl would have dumped that puck in and went for a change. But he was shorthanded with five seconds left, and he started the rush. He knew that North Dakota wouldn't have time to go the other way. Holl said as much in the press conference.

Rau's role in the play wasn't over either. He sped down the left wing giving Minnesota a temporary three on two. Holl headmanned the puck to him. Had there been ten seconds left, Rau would have continued to drive wide instead of risking a shot that might carom off shin pads. With three seconds left, though, he tried to get something on net. The puck kicked off Jordan Schmaltz's leg right to Holl. Sometimes our most brilliant moments are those when we don't think at all. He fired the puck. It nicked the post and went in.

There is a reason they call the last seconds of a game the dying moments. On weary legs, North Dakota exited the ice and headed down the dark tunnel. The festive green of their sweaters provided a tragic contrast of emotions, like a woman buried in her wedding dress.

On the other side, a garish mix of maroon and gold celebrated three times. Once when Holl's shot went in. Twice when the officials allowed the goal after review. Three times when the horn finally sounded after one last face off.

For one team and its fan base, the Frozen Four party continued. For the other, it ended in stunning fashion.

I walked into the North Dakota locker room shortly after the final buzzer and met a silence so gripping that I felt compelled to whisper. Various members of the team- who shall remain nameless thanks to a 2012 vote- slumped in their stalls. Others sprawled out on the floor.

It's one thing to get caught up in euphoria. It's another to be paralyzed by despondence.