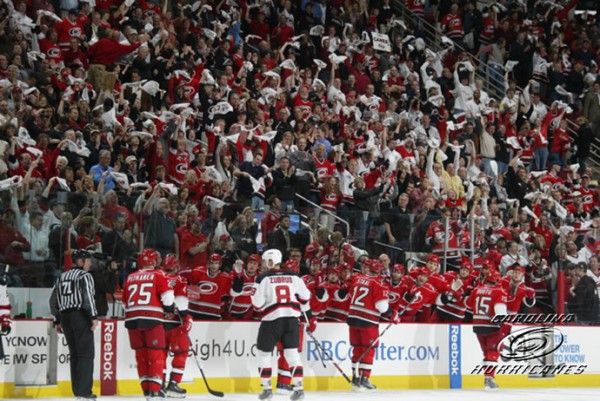 A couple of weeks ago, I decided that I would do something that I haven't done in a while. You guessed it: I decided to attend a hockey match. Don’t get it twisted; I used to routinely go to matches, but my experience at the All Star Game last year jaded me for a while.

Before last year, I would routinely go with my white friends and all my black friends would ask me if I was really going to watch hockey. If they did go with me, I would hear the obligatory, “Where are all the brothas at?”

Honestly, I was really mad at a lot of them until I decided to go to the NHL All Star game last year in Raleigh, NC. I live in the Bull City (Durham, NC), and the RBC Center is only ten minutes from my house, so there isn’t any real excuse not to go see hockey except for the fact that my friends refuse to go with me. I didn’t understand it before that weekend, because they would come to my house and watch hockey.  On occasion, we even went to sports bars to watch games as well. These guys would even call me from time-to-time and ask if the Hurricanes won, but they never wanted to go to the game.

The problem was that they didn’t feel welcome at the game. I really didn't understand this, but my All Star experience showed me why. With a national audience and players from across the entire US in attendance, I paid attention to the environment.

The items being sold had no sense of multicultural flavor. Honestly, everything in the joint was catering to white folks. I’m by far the least racist person I know, so it took me a while to figure this thing out. Ironically, it wasn’t me that saw it first; it was a little white boy sitting beside me. He turned to his dad and said, “Why aren’t there any black people here besides the man beside us?” Then he said “Where are the Hispanics and the Asian people at, dad?” I looked up and the kid was right. I saw, maybe, seven black people in attendance and not a single Hispanic person in attendance. There were about five Asian people in attendance, but they were with a predominately white crowd.

I kept waiting for the music to take a turn. You know, I was waiting to hear that one crossover rap song or the one hip-hop song that every white person and black person can sing without seeing the words, and it never happened. It occurred to me on this day that the audience that was being targeted didn’t include my demographic. It’s a shame that’s the case though, because it’s really poor marketing. If you think about it, the only people that are going to go to hockey games are the ones being targeted. Good marketing tries to pull in people that wouldn’t usually go to these types of games.

I know what you are thinking: “yeah he says he’s not racist, but he sure sounds racist to me.” That’s not the case. I am just a good businessman. Good business isn’t targeting people who will come anyway; good business is bringing people who wouldn’t normally think about you into your establishment. Let’s just say that I can understand why hockey rates so low on the list of sports, just behind WWE wrestling and NASCAR. It's not that it's less exciting, but it's because they really need to reach out to more than one demographic.