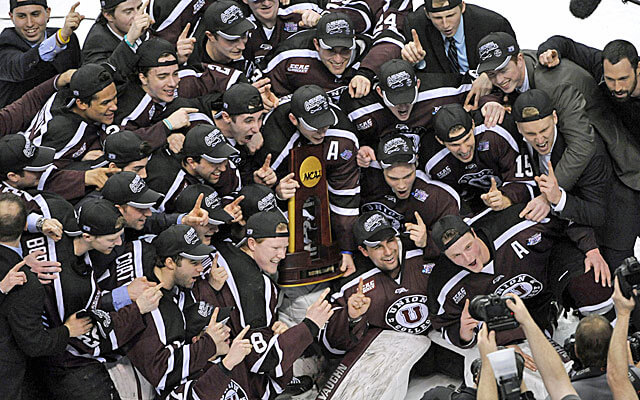 A 30-something Minnesota fan in a white sweater with the number 58 and “The Lego Guy” on the back was walking a few feet ahead of me outside the Wells Fargo Center. He wore a cowboy hat and what looked like partly shredded chaps. For a man drawing so much attention to himself, The Lego Guy wasn't keen on talking.

“So you're The Lego Guy?” I called out to him. He giggled nervously, put his head down and continued to walk straight ahead.

“Ah, yeah. I'm almost annoyed at how many times I've had to explain this,” he began. “I get the cheerleaders gifts every year, and Legos are always a part of it.”

We soon passed a coach bus, The Lego Guy and I, where Goldy the Minnesota mascot and the cheerleaders were set to board. The girls spotted The Lego Guy immediately and gave him a raucous cheer, pom-poms and everything. The Lego Guy sheepishly raised his hand to acknowledge the adoration.

“You seem pretty famous to me,” I said.

“Well they know me.”

Union College has no Lego Guy. Union College has no cheerleaders (or if it does, they did not make the trip to Philadelphia). Union College has T-shirts and baseball caps, souvenirs fans scored during the Dutchmen's run to the Frozen Four. On the other side, Minnesota fans wore sweaters from every era of the program. There was a Neal Broten throwback, a horizontal striped jersey from the John Mayasich teams and several iterations that have come from the last decade all emblazoned with the iconic M. Boys as young as six and men well into their retirements sported the maroon and gold.

The contrast in wardrobes illustrated what we already knew: This was a mismatch in tradition. Forget the NHL draft picks (14-1), forget the national titles (5-0), forget the Frozen Four appearances (21-2). This was Minnesota, one of the most storied programs in hockey history, vs. Union College. Did we need to say more?

This was a mismatch in future prospects as well. Minnesota coach Don Lucia, who has two national championships to his name, will vacate his position only through retirement, resignation or death. Union coach Rick Bennett has built a juggernaut from nothing during his tenure with the Dutchmen. But as soon as that next big coaching gig opens up, he'll jump at the promotion. And even if Bennett chooses to stay, his team will still play its home games in one of New York State's most downtrodden cities, most recently depicted in the 2013 movie “The Place Beyond The Pines.” Lucia, on the other hand, will continue to pluck talent from the most fertile recruiting ground in college hockey.

On Saturday night, none of that mattered. Union and Minnesota were simply the best two hockey teams in the nation, equals for an hour. Scratch that. Union was the best hockey team in the nation. On this night, the Dutchmen fired 49 shots on Minnesota's goal. On this night, Shayne Gostisbehere, the brilliant Floridian defenseman whose success somewhat exonerates Gary Bettman's Sunbelt movement, played perfect hockey. He scored a goal and assisted on two others while skating to a ridiculous +7 rating. Union rallied around its talisman and played with a confidence and a verve that Minnesota simply couldn't handle. It was a mismatch of tradition but also a mismatch in the moment. The Dutchmen seized it. The 7-4 victory was an emphatic statement that Union hockey was here — maybe not to stay — and that's OK.

That's the thing with National Championships. Too often we blend past, present and futures together. We forget the kids. The Dutchmen didn't take to the ice thinking about the early years of Union hockey, when a .500 record was a dream. They didn't think about what the program might look five years from now. Gostisbehere (GOSS-tis-bear) didn't think about explaining where Schenectady (Skin-EC-ta-dee) is on a map. They just wanted to win for them, the 20 guys in the locker room. So, too, did the Gophers.

It was marriage for the winners and a breakup for the losers. One immortalizes the bond between teammates. The other stirs reflection on the good times in the face of tragedy.

Travis Boyd and Justin Kloos of Minnesota took to the podium following the devastating loss. Boyd emerged in a mock T-shirt and athletic shorts. He wore a Minnesota hat backwards. Kloos remained in full gear, save for his skates, which were begrudgingly discarded in the locker room. Both players carried the bedraggled look that comes with loss. Each had chosen a different method of coping. Boyd threw off his uniform like a jilted lover might tear up old pictures — destroy what you hold dear in hopes of moving on. Kloos, a freshman, couldn't yet let go. The two answered the questions posed to them as thoughtfully and as thoroughly as they could. When they were dismissed, they walked back around the curtains and passed the trays full of chocolate milk meant for recovery — a reminder of how young these men really are.

The victors came forth next and spoke mostly in cliches. “Indescribable,” Daniel Ciampini, who scored four goals in two Frozen Four games, called it. “Unbelievable,” said Gostisbehere. Few could fault them. It was a time for cliches.

Ten years prior, Union finished 14-17-5, good enough for eighth place in the ECAC. Ten years from now, who knows where the Dutchmen will be. But on Saturday, in front of 18,000 fans, they were National Champions.

6 Replies to “A Mid-Major Finally Wins It All: Union College's First National Championship”