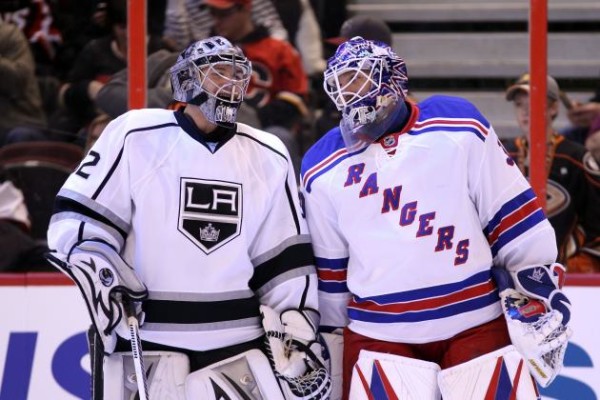 It hasn’t even been a full day since the 2014 Stanley Cup Final participants were set, yet before day’s end, you’re going to hear too much about market sizes, ratings — especially from people who don’t know squat about them, which are A LOT — Los Angeles culture vs. New York culture, Hollywood vs. Brooklyn (ugh), East Coast vs. West Coast, ego vs. ego, and all that other stuff.

All of that crap you just read above will be thrown at you at a relentless pace by a group of people who still think “selfies” are a new phenomenon. They’ll also be regurgitated by sportswriters and talking heads who normally don’t discuss hockey until it’s a chance to dump on its flaws — fighting that’s still making its way out of the game, aforementioned market sizes and expansion efforts, and the asinine NHL vs. NBA debate that makes absolutely zero sense.

What everyone here should keep mind to is the game itself, as this should be an outstanding Stanley Cup Final. The Los Angeles Kings are as good as it gets and have been since making that incomparable run to the Cup in 2012 as an eighth seed. The New York Rangers have finally done what two decades of massive spending and desperation were meant to do since the last win 20 years ago. Outstanding goalies, opportunistic skill players, clever coaching.

Passionate fans should appreciate the skills we will see for the next two weeks (it may go seven games), regardless of the sweaters the players wear or the cities you’ll be constantly reminded that they represent.

You know how great Henrik Lundqvist is, and you watched Jonathan Quick ascend to the upper echelon of goaltenders in these last three seasons. You know how the big trade between the Kings and Philadelphia Flyers (and Columbus Blue Jackets with Jeff Carter) in 2011 have benefited both franchises in the long run. You know that Darryl Sutter has a Popovich/Belichick-ish tone at press conferences, which will be a surprise to anyone who doesn’t follow the Kings. You know how brilliant Anze Kopitar can be, how Justin Williams became “Mr. Game 7” and how the Kings’ Twitter account is the best in sports. You know how emotions have surrounded the Rangers with the passing of Martin St. Louis’ mom recently and the wife of Dominic Moore over a year ago. You know how the addition of St. Louis and the playoff resurrection of Brad Richards have been timely jolts for the New York offense. You know the story of redemption Alain Vigneault hopes to write a year after being fired from Vancouver.

(And yes, if you’ve lived under a rock for the last 20 years, this is the first Final for the Rangers since the incredible Summer of ’94 in these Boroughs.)

Casual fans (especially self-aware band-wagoners) don’t know the deep backstory to this series as the hardcore hockey fans do. You may eat up the pop culture and cross-sport references because those are part of how you got here, reading about this cold-weather sport in June. However, do yourselves a favor and take the time to absorb the nuances of what makes the Stanley Cup push the best playoffs in all of sports. Yes, ALL OF SPORTS.

I’ve spent most of my sports life frustrated at the existence of sports’ culture vultures. They spend about as much time caring about the success of your favorite team as they have playing Candy Crush Saga. They have varied levels of knowledge of these games — some graciously admit to knowing nothing but who the big-name players are and when points are scored while others pretend they can match wits with you until revealing they haven’t watched the sport since the last championship/retirement of a superstar. In times like these, resenting those who suddenly want to be here for the moment isn’t exactly wrong.

And yet, in the case of the NHL and hockey in general, there’s probably not a better time for all viewers and supporters to be hand and hand. The league’s growth despite its stumbles has been impressive, and the postseason has been a reflection of it. Some bandwagon fans become entrenched when the product continues to dazzle while others may actually take a few nights in June to hold off on Netflix, hop onto social media and flip to NBC Sports Net.

After all, whether we want to admit it or not, fan bases are built not just by a team representing a given geography, but by winning a title or two.

So, regardless of where you stand on this upcoming Final — a Kings fan since their inception, a Rangers fan since last week, a hockey enthusiast only during the playoffs, a fan of most things L.A. or NYC — soak it all in without the media puffery that will emerge in the coming days. Because if you tune in, you’re sure to enjoy what you see.

[By the way, let’s avoid the “2Pac vs. Biggie” references, please. They’ve been made into terrible clichés and just aren’t funny. Thanks in advance.]

Kings vs. Rangers: How To Enjoy The 2014 Stanley Cup Final

Hockey How The West Was Won: The Kings Of The Elimination…
Hockey The Quiet King: Henrik Lundqvist’s Playoff B…
4