The arena that started its life as the Northlands Coliseum ended its storied existence as Rexall Place last week, when the Edmonton Oilers played their final game against the Vancouver Canucks. If buildings could talk, this one would tell tales about hockey's greatest player, his trade and return as a member of an American team, five Stanley Cup championships, and countless other yarns about what hockey means to the people of Edmonton. The closing of the "old barn," as outdated, decrepit arenas come to be known, heralds the passing of the torch to a brand-new, state-of-the-art facility called Rogers Place, which will open in October.

The timing of the Edmonton Oilers ending their 41-year tenure at Rexall Place is especially fitting, since not only will the team inhabit a building that looks like this... 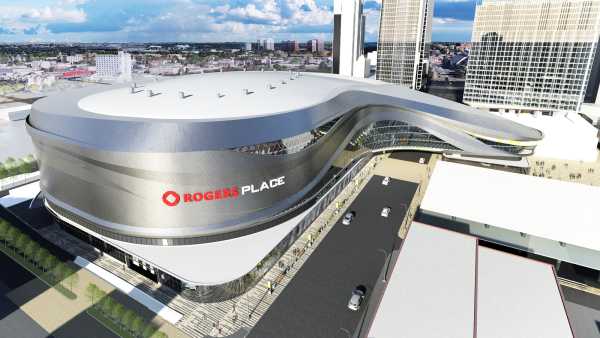 ... but it will bring some of the best young talent to play in Edmonton in decades. Granted, Connor McDavid, Tyler Hall and Ryan Nugent-Hopkins are going to need some help in the coming seasons, but the future is certainly looking brighter. By missing the playoffs this year, the Oilers tied a dubious record held by the Florida Panthers of 10 consecutive absences. It's possible that moving into a shiny new rink with all the modern amenities will rejuvenate the floundering team and give it some much needed mojo to once again become a contender.

The city of Edmonton outdid itself paying tribute to Rexall, which opened in 1974 and has been the only home the Oilers have ever known. The team started out as a member of the World Hockey Association (WHA) and joined the NHL in 1979 after the league went belly-up. Five years later, the Oilers, with Wayne Gretzky, Mark Messier, Paul Coffey and company, ended the New York Islanders' streak of four straight Stanley Cups by defeating them on home ice to start their own dynasty. Those Oiler teams ushered in the glory days of the NHL's expansion era, being the first Canadian team to reach dynastic heights since the Montreal Canadiens of the 1950s and '60s.

It was fun while it lasted, but even though the team managed to win one more Cup in 1990, and one completely unexpected trip to the Final in 2006 as an eighth seed, the shadow of "the trade" (Gretzky, Marty McSorley and Mike Krushelnyski to the Los Angeles Kings for Jimmy Carson, Martin Gelinas, $15 million in cash, and the Kings' first-round draft picks in 1989, 1991 and 1993) has loomed large over the city for what's closing in on 30 years. Perhaps a change of venue and scenery will be enough to finally bury the past.

The past, however, was celebrated as only Canadians know how. Wayne Gretzky showed up, along with his father Walter, as well as Mark Messier and 130 alumni who played for the team. Original season ticket-holders, super fans, and the rest of the 17,000 capacity crowd were treated to an hour-long farewell ceremony. It didn't quite have the pomp, ceremony and literal torch-passing "Les Habitants" employed when the team left the Montreal Forum for the Bell Centre in 1996, but Edmonton, admittedly, is more prairie down home than big city sophisticate. All the same, it was quite the send-off. And let's not forget who will be accompanying the team to its new home: 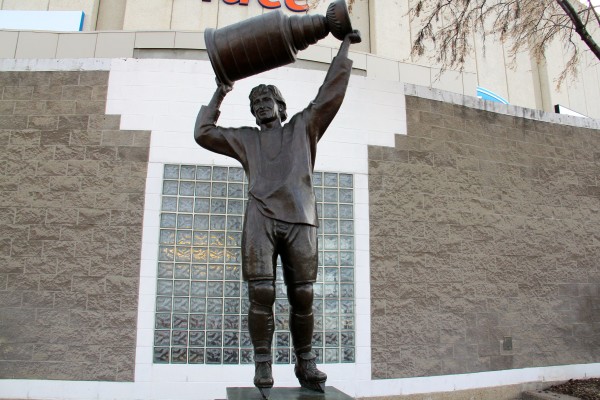 Yes, the life-size bronze statue of the Great One will have pride of place in front of the new building.

For sports fans, the prospect of a new stadium or arena can sometimes be a tough pill to swallow. As humans, we generally dislike change, and it can be even more painful when the teams you cheer for move into new venues. The newer, modern facilities lack the charm and character of those antiquated structures we often bitched and moaned about. Things like long bathroom lines, narrow concourses and humdrum concession choices were a small price to pay for spectacular sight lines and all the fascinating quirks some of the old barns had. Today's newer stadiums and arenas are not allowed to age gracefully as the old ones did; no, they need repeated upgrades to keep the fans coming back. After all, we're no longer just paying the price of admission to see the game — we're paying for an entertainment experience. The games have become secondary to the fancy food and the ostentatious atmosphere in the vast majority of these buildings.

As an attendee of a lifetime of New York Mets games played at Shea Stadium, and as a former season ticket-holder of the New York Islanders (I've always been told that Rexall and the Nassau Coliseum were very similar), I feel for the people of Edmonton. Right now, they're sad, but many of them will carry the memories of the old barn with them wherever they go. And something tells me that Rogers Place will not be the structural disaster the Barclays Center in Brooklyn is. Another thing Canadians do extremely well is build shrines for the teams they love, and the Edmonton faithful sure do love the Oilers.

Nava is a freelance writer based in the American Pacific Northwest. She loves to watch and write about hockey because she is also Canadian. During the off-season, Nava loves to cross-border shop, drink gallons of Tim Horton's coffee, and contemplate jumping in her car and driving to Alaska.