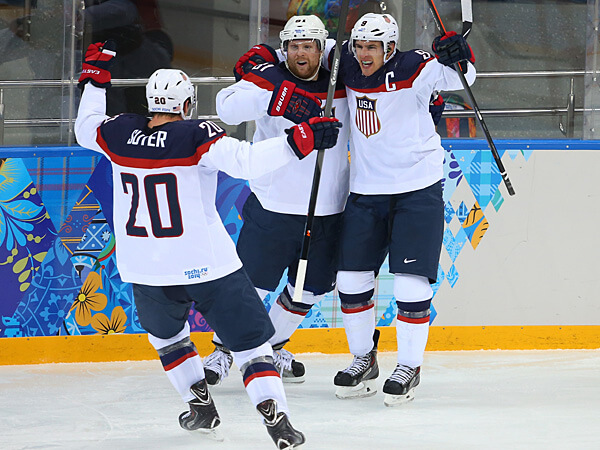 Admit it. Aside from T.J. Sochi and the vibrancy of the Slovenian team, both in uniform and spirit, this has been a dull Winter Olympics hockey tournament so far.

The host Russians celebrated hard but bowed out early. The Slovaks, semifinalists four years ago, didn't win a game. The aging Czechs wheezed their way through a quarterfinal loss to the Americans. The Swiss, a dark horse favorite entering Sochi, failed to leave an impression as they were upset by Latvia on Tuesday. Even top-seeded Sweden hasn't looked the part.

And yet we're left with hope. Sweden plays Finland in one semifinal, while the hockey gods have gifted us USA-Canada in the other. With all due respect to the Lapland nations, all eyes will be fixated on the rematch from the 2010 gold medal game.

The key characters have returned. For the Canadians, Sidney Crosby and Jonathan Toews front a talented but somewhat underachieving forward group. For the United States, 2010 mainstays Phil Kessel, Zach Parise, David Backes, Joe Pavelski and Dustin Brown have all contributed offensively for the best team in the tournament.

But one match-up in particular has my attention, and really it's not a match-up at all. Since seven-time Norris Trophy winner (as the NHL's best defenseman) Nicklas Lidstrom retired following the 2012 Stanley Cup Playoffs, the "Best Defenseman in the World" crown has been up for grabs. And on Friday, the top four contenders will take the spotlight.

Wisconsin-born Ryan Suter might have the strongest case at the moment. He made headlines when he signed a $98 million free agent contract with the Minnesota Wild in the summer of 2012. So far, he's lived up to the money. Suter was a Norris finalist a season ago when he posted 32 points in the truncated 48-game schedule.

This year, Suter is averaging an absolutely absurd 29:49 minutes of ice time per game for the Wild. What does he do well? Everything and nothing. Like Lidstrom, Suter's talent is in simplicity. He'll make the first pass out of the zone. He'll steer an on-charging forward into the boards without laying him out. He'll rely on superior positioning to limit the wear and tear on his legs rather then lunge with desperate poke checks. He is very much unspectacular. And then you watch Suter turn in a 22-minute, three-assist effort against the Czechs and you realize just how good he is. When he's on the ice, whether for Team USA or the Wild, he controls the entire game.

While the United States has a number of very good d-men behind Suter — Cam Fowler, Kevin Shattenkirk and Ryan McDonagh have been especially impressive — the Americans cannot match the defensive depth of the Canadians. Then again, no one can.

Shea Weber, he of the 14-year, $110 million contract with the Nashville Predators, makes the most noise from the blue line. At 6'4", 233 pounds, Weber is a mobile, offensively gifted Chris Pronger. He's as nasty in his own zone as he is manning the point on the power play. But it's his slap shot that has made Weber's reputation. In the 2010 Vancouver games, he blasted a puck through the net against Germany. So far in Sochi, Weber has scored three goals ... on three slap shots. The last was a stunning one-timer that defeated the pesky Latvians in the quarterfinals.

The man who passed him the puck? Drew Doughty, another heir apparent to the Lidstrom throne. The L.A. Kings defenseman is a veteran of two Olympics and five and a half NHL seasons at the tender age of 24. At times, his youth shows on the ice both in positive and negative ways. Doughty has a knack for recovery. Part of that is his tremendous skating ability, and part of it is his penchant for forcing the play. But when the stakes are highest, Doughty is at his best. He becomes Scott Niedermayer with a little more flair. When the Kings won the Stanley Cup in 2012, Doughty was their player. He was arguably Canada's best d-man in Vancouver. Now he leads the 2014 team in goals with 4 and points with 6.

Finally, there's Duncan Keith, who has accomplished everything a defenseman can. He won the Norris Trophy in 2010 as well as a Stanley Cup with the Chicago Blackhawks and a gold medal. If Canada captures gold again, Keith will cap an unprecedented run of success: two Stanley Cups and two Olympic golds in a four-year stretch. Keith possesses equal parts speed and control. He is a Formula One car on ice. Duncan Keith may be the best of the bunch, the consummate modern defensemen.

Tune in Friday to find out not only who advances to the Gold Medal game, but which defenseman stands out the most.