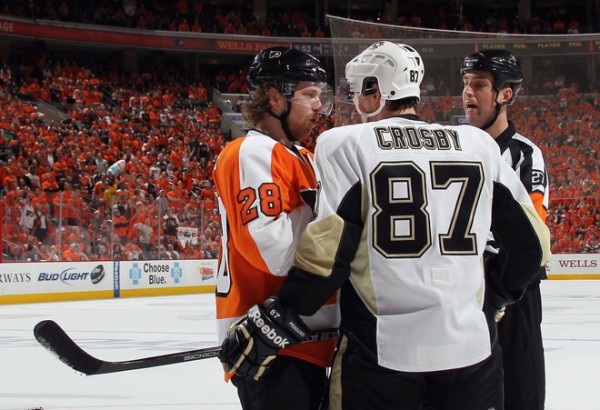 If you turned on hockey for the first time this season in the last week, you may have been looking for high intensity.

Chances are good you found it. The NHL playoffs are unlike any other when it comes to break-neck speed, competitive play, and electric atmospheres.

However, you probably noticed something else as well. You probably saw some vicious play that resulted in injury. Maybe you witnessed a fight against an unwilling participant. Perhaps you winced at a cross-check to someone’s head or neck.

In the NHL, high intensity can sometimes translate to violence. It’s the way the game has been played for years and years. Many novice fans are drawn to the game when they see two guys bludgeoning each other in an allowed fight.

During the course of the season, the fights are of the regulatory kind. Much like the tit-for-tat beaning of batters in baseball, hockey has an unwritten code. Each team possesses someone to take care of the problems that cross over the lines of the unwritten.

The police of the NHL are sometimes the officials, but the players who police the game carry just as much, if not more weight, with their fists.

Every season, there’s a series or two that gets violent; that’s just how it goes. It can be between division foes or teams who usually see each other in the playoffs. The series goes on and the violence is overlooked.

However, this season has been downright ridiculous. Players have been hurt through intentional malice and undisciplined hockey in almost every series. The phrase ‘intent to injure’ has come up quite a bit through it all.

Intent to injure? In the same sports world that just blew up Gregg Williams for putting bounties on players? Why does hockey get a pass?

While there is little doubt that the sport’s violent nature helps to draw viewers, it’s not necessary for the health of the game. Every time an incident occurs, the hockey world goes back to the drawing board to figure out what the best punishment should be.

The thing is, the punishment is erratic and inconsistent. And that’s why hockey finds itself in the mess.

It’s tangled between old owners and general managers who believe in ‘old-time hockey’ and a new school of thinking that appreciates offensive talent.

Old-time hockey consists of brawling when needed. The last man standing wins, and only the strong survive.

It’s no breaking news to anyone who has watched hockey, but for those first tuning in, it can be a major turnoff. In the NHL’s quest to remove itself from the niche and into the mainstream, the tweaks are trying to be made.

Yet, they aren’t being made efficiently. If an injury decides a suspension, it seems like the rulings are based on effect rather than cause. While the diagnosis of a player will forever be taken into account, there’s no understanding as to why.

In a game between the New York Rangers and Ottawa Senators, Rangers forward Carl Hagelin hit Daniel Alfredsson in the head with an elbow. Alfredsson left the game and Hagelin was suspended for three games.

At the end of a Nashville Predators and Detroit matchup, Preds defenseman Shea Weber headlocked Henrik Zetterburg and slammed his head into the glass.

Both plays screamed intent to injure. However, Zetterburg was fine after the play, unlike Alfredsson. Weber was fined $2,500.

When the intent to injure appears similar and one player catches a small fine while another is suspended, there’s a problem.

If the hockey fans have problems with the consistency of rulings, that’s an issue. One can only imagine what a first-time viewer would think.

The NHL playoffs present fantastic hockey and the game’s greatest skill on display. Right now, that skill is taking a backseat to dirty play, shoddy officiating, and ridiculous rulings.

It’s a mess, and no one knows who will clean it all up. What everyone does know, however, is that it needs to start getting cleaned up now.