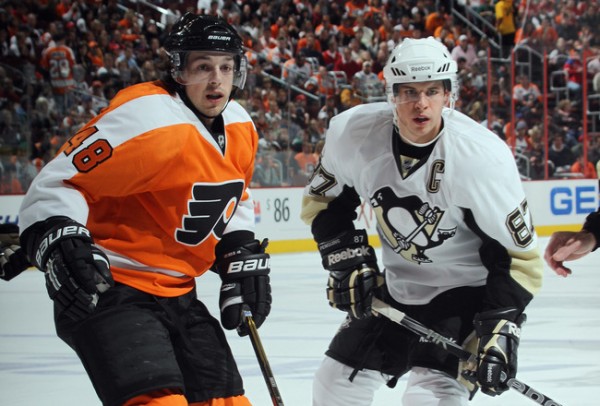 The National Hockey League Playoffs are around the corner. It’s one of the most exciting events in sports, mainly because a hot goaltender or a couple bounces of the puck are all that separates teams from winning the Stanley Cup.

In the interest of breaking down the playoffs for the everyman, it’s time to let it be known why each of the 16 playoff teams can win it all.

This season has been a memorable one for the Broadway Blueshirts. They inked prized free agent forward Brad Richards in the offseason. They defeated the Philadelphia Flyers in the the Outdoor Winter Classic, hockey’s most visible game. Since midseason, they’ve ruled the Eastern Conference. There is no secret to their success. Goalie Henrik Lundqvist, aka The King, aka every female hockey fan’s crush, has been incredible this year. When he’s on his game, he’s more than capable to lead the Rangers back to Cup glory.

If you paid attention to last year’s playoffs, you know that the big bad Bruins took home the chalice. They have the same core in place this season, and it’s hard to bet against the reigning champs. Big and physical, Boston can wear down anyone in its path.

Figuring out a reason the Panthers can win the Cup is like mastering calculus. It’s tough to do. Florida’s ending of a 11-year playoff drought is a nice story. They don’t have the most firepower or best goaltending, but perhaps they can ride the emotion of finally making the playoffs to the Cup. Don’t bet on it, though.

Pittsburgh has the same star power it had from the 2009 Cup-winning team. Although now, the stars have gotten even better. Sidney Crosby is the best player in the world, and Evgeni Malkin scored 50 goals this season. Malkin may be the second best player in the world. Vegas thinks the Penguins have a shot, too. Pittsburgh is the odds on favorite to win the Cup according to the books at 4/1.

One of these years, it’s going to work out for the Flyers. Despite routinely making the playoffs, the Bullies of Broad Street haven’t won the Cup since 1975. Is this the year? They have to get past state rival Pittsburgh in the first round. If they can, the deep defense and prolific offense makes them a serious contender.

Probably the most underrated team in the playoffs. The Devils finished fourth in the deep Atlantic Division. They boast star forwards Ilya Kovalchuk and Zach Parise. Those two are potent enough offensively to carry the team from Jersey on a surprise run.

Even the casual hockey fan knows how talented Alexander Ovechkin is, but they might not know about Nicklas Backstrom. The Capitals struggled throughout the season, but Backstrom missed close to 40 games with a concussion. With him back in the lineup, Washington can click on all cylinders and make some noise. Also, they are no longer burdened with expectations which may help them flourish.

Well, Ottawa needs to pray. If they somehow, someway, miraculously get past the Rangers, they could benefit from upheaval in some other matchups. It will take a lot of luck, but every team that makes the playoffs has a shot.

5 Replies to “2012 NHL Playoffs: Why Each Playoff Team Can Hoist The Cup”

2012 NHL Playoffs: Why Each Playoff Team Can Hoist The Cup