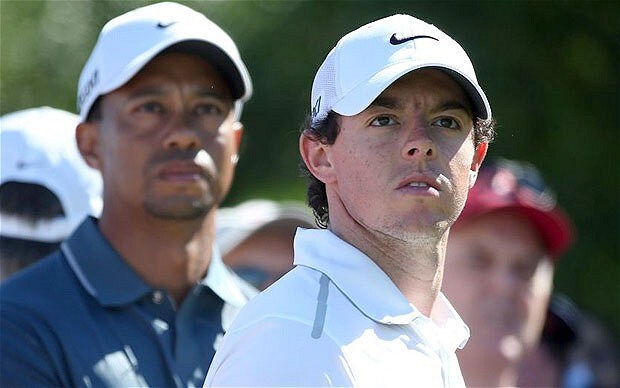 Want to test your mettle? Play golf against Tiger Woods. Want to test your competitive psyche? Bet on golf with Michael Jordan. World number one golfer Rory McIlroy had the chance to do both this Friday in a member/pro exhibition.

Jordan invited the young Irishman to join him in a two-on-two match against ex-NFLer and current TV personality Ahmad Rashad and Woods. McIlroy inexplicably declined. He had the chance to spend four hours competing and conversing with three men who've reached the pinnacle of their respective professions, and he said, “No thanks.”

If you consider McIlroy's last two seasons, it's hard to criticize any golf-related decision he makes. The young man from Northern Ireland has emerged as the most likely candidate to challenge Tiger's supremacy on a golf course. McIlroy is a two-time Major winner at 23, each won in record-setting fashion. He obliterated the field at Congressional in the 2011 U.S. Open, finishing at a ridiculous -16. Rory repeated the act at the 2012 PGA championship, where he cruised to an 8-stroke victory. The betting odds at sports.bwin.com/en/golf were certainly in Rory's favor that year.

Golf fans have long searched for a foil to the notoriously unflappable Woods. They may have found one in McIlroy. Woods' habitual dominance of the golf course casts him as half demigod, half robot. He's quite simply the most unapproachable athlete, both in talent and personality, of the post-Jordan era.

On the contrary, McIlroy epitomizes approachability. He speaks with an accent most associate with bar mates and leprechauns. A mop of messy locks complements his cherubic face. McIlroy wears his youth.

One struggles to find flaws in the Irishman's physical game - he's long off the tee, he's clinical with his irons and his flat stick rarely betrays him. But unlike his idol, Woods, McIlroy has shown inconsistencies in his mental fortitude.

He fired an opening-round, record-setting 63 at St. Andrew's in the 2010 British Open. A second-round 80, however, derailed his pursuit of his first Major. He ultimately finished third. At Augusta in 2011, Rory took a four-shot lead into Sunday before enduring another disastrous 80. He wilted in the spotlight, visibly dejected after each wayward shot.

In winning his two Majors, McIlroy exorcised the demons of St. Andrew's and Augusta, but he still hasn't shaken the critics completely. Just two weeks ago, he withdrew from the Honda Classic complaining of a toothache. He later reneged on that excuse and admitted that he wasn't mentally there.

McIlroy needs to find consistency if he wants to continue his ascension in the golf world. What better way to start than to pick the brains of the two greatest winners in modern sports?

If the Irish prodigy endeavors to match the athletic accomplishments of both Jordan and Woods - and undoubtedly he does - then he should have accepted Jordan's offer. He signed with Nike earlier this year ostensibly to follow in the footsteps of Tiger. Jordan transformed Nike into a global empire, which in turn lured golf's biggest star to the swoosh. McIlroy is next in line.

And yet, he still finds reason to say no to the match. It's not like he has a grueling schedule: McIlroy won't tee it up on tour again until the Valero Texas Open April 4. Perhaps he felt his final-round 65 at Doral last week was good enough to erase the memories of his phantom toothache.

Others have asserted that it would be inappropriate to play in an exhibition just two weeks after dropping out of a professional event.

Whatever the case may be, McIlroy just refused 6 NBA Championships and 14 Majors. The benefit from partaking in the event would greatly outweigh any criticism that may come his way. Come April when it's Tiger and not he who slips on the Green Jacket, Rory may just ask for a mulligan on this one.