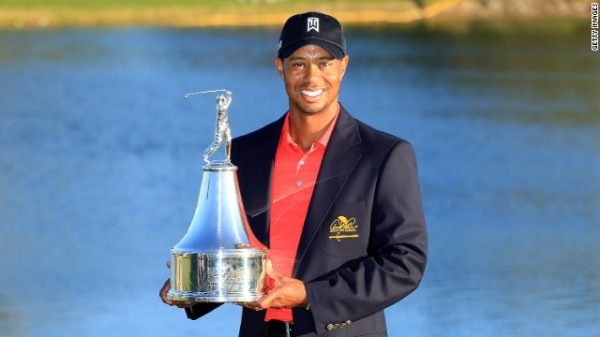 For the past few years, Tiger Woods has been pulled in several directions. After news of Woods' infidelity hit the wire, everyone has been on Tiger about becoming a better man. In fact, Woods has gone out of his way to show the world that he can be a better man. In the process, he lost something that he may never recapture. A lot of people have put their differences about Woods on the back burner, and now, everyone wants Tiger the Champion to come back. Tiger has been Jordan on the Wizards for the past two seasons. His name may sell some tickets, but his game has been pure garbage since the incident. You could even say that Tiger Woods has lost his swag and has been a shadow of his former self.

Problems aside, Tiger Woods was once the greatest, because he possessed a force of invincibility. Tiger Woods was great, because he was greedy. If he wanted something, he took it and he didn’t worry about the consequences. Whether it was women, cars, property, or golf tournaments, Tiger could flip a switch and go get anything he wanted and make it happen. He was an Alpha Male who possessed the burning desire to be better than everyone at everything.

Since his incident, he has been trying to be something that he is not. In my experience of playing and covering sports, I have learned that you don’t have to be a great person to be a megastar. Wisdom tells us that everyone wants you to be something that you are not. It appears that Tiger started listening to what everyone wanted for a while, and he no longer trusted himself and it reflected in his play.

It wasn’t until a couple of months ago that Tiger started being himself again. He didn’t appear to care what other people thought. When I saw that, I knew there was a chance that he would be back. This time not as Jordan on the Wizards or even the felonious number 45 on the Bulls, but the franchise player that I knew was still lurking inside. The past few tournaments, Tiger has rediscovered his old ways and that, in essence, is what made him different. He paid too much attention to the negative and not on the positive, and once his cloak of invincibility was been torn, he started acting like a mark.

For almost two years, I looked at a man who looked lost. He needed direction; he lost that look that led you to believe that he couldn’t lose. I finally see that look again. That look that says I am Tiger Woods, and the world is mine.

I’m happy to see that Tiger has gotten away from all of this fake smiling and happy-go-lucky junk on the golf course. Leave being the people’s favorite to Phil Mickelson and Arnold Palmer, because that’s their thing. It is in their personality. Tiger Woods has to be different.  I miss the guy who smiled on the inside because he was kicking the mess out of his competition.

This week at Bay Hill, it was good to see Tiger tuned in. Forgetting all that kindness and talking to his competition. It appears that you finally realized that he is the enemy for 18 holes; you guys can chat it up at the end of a round.

A friendly Tiger is the same as a pussy cat. You may as well change your name to Kitty or Tom or something. I am happy to see that fight back in you, and I hope that this week is the beginning of something big for you. This week was the first time that I have seen that US Open-final-putt-focus since you returned.

I am just glad that you finally woke up. You are Tiger Woods. You are a womanizing man whore who enjoys what life has to offer. There is nothing wrong with that. Does that make me morally wrong? Maybe it does, but it is what it is. You have to be what you are.

The Masters are just a couple of weeks away, and there are a few things I am going to need to see before I believe in you wholeheartedly, even though you appear to be on the right track. When you make a big putt, give me a fist pump. When you hit it down the middle, give me a big club twirl. When you hit it close, give your caddie a messed up high five. Do all the things that made you great. If you need a mistress before your round every tournament, then do you. Golf hasn’t been the same without you, and if you are finally back, and it appears you are, welcome back, you big old pimp.

2 Replies to “Is The Real Tiger Woods Finally Back?”