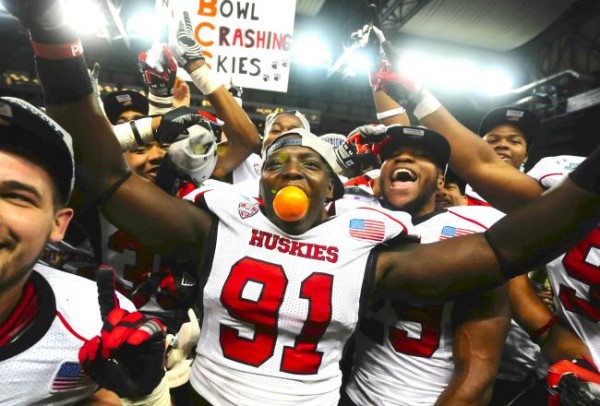 Why is it that everyone loves to watch a David vs. Goliath match-up? Is it because we love to see the big guy fall, or is it because we want to see Goliath finally destroy David’s will to compete?

The 2013 Discover Orange Bowl will be the feature David vs. Goliath game of the bowl season as the ACC Champion Florida State University will take on the MAC Champion Northern Illinois Huskies.

Many people were scratching their heads on this selection for a BCS bowl. In fact, many had already put Texas A&M or Oklahoma in this game against the ACC Champion. If the BCS had put either Johnny Football or Landry Jones in this game, I would have been perfectly fine with that. However, they opted for Northern Illinois after the Huskies upset an undefeated Kent State team that everyone felt deserved the BCS bid.

You should never turn down an opportunity to catch a glimpse of what may be taking place in South Florida. From South Beach to Fort Lauderdale, the scenery will almost always be breathtaking. Camera shots of the beautiful women in the stands will be more the reason to check out the game.

On a more serious note, you can check out one of the most dynamic offenses in the ACC as Florida State should have no problem dismantling the Northern Illinois defense. This is essentially a home game for the Seminoles, as they will have most of the Gulf Coast in attendance along with the fans in South Florida to accompany them.

In fact, Northern Illinois had such a problem selling tickets that the Huskies had to purchase over 7,000 tickets and just give them to students for the game. You would think that their fans would have jumped at such a big opportunity, but maybe they just realized that there aren’t enough rocks for their slingshot.

You can’t talk about Florida State without talking about E.J. Manuel. This guy has to be the most enigmatic quarterback on a nationally ranked team in America. You never know which guy is going to show up. One week he is a sniper with the football, and the next week he can’t hit the broad side of a barn with a football. Florida State’s success this year has come despite his inconsistent play.

Honestly when you look at the quarterback position, Northern Illinois may have one of the best in the business. Jordan Lynch is a star, and his numbers don’t lie. If he were playing at a BCS school, Lynch would be a megastar garnering serious Heisman Trophy accolades. As it is, he put together a magical season in the MAC: 4,463 total yards (1,771 rushing), 43 TDs (19 rushing) and only five interceptions.

The game will be decided in the trenches. Florida State has a slew of offensive and defensive linemen who are NFL-ready, and that should be the difference in the game. I wouldn’t be surprised if this turns into a serious ball game, though. If it does, it will be because Jordan Lynch (David) has plenty of rocks in that slingshot of his, and he is able to out-duel that Florida State defense (Goliath). If that is the case then the ACC will lose all types of credibility, and it could very well be stained beyond repair.

2 Replies to “Why You Should Watch The Orange Bowl: Hey, At Least There Will Be Beautiful Women In The Stands”