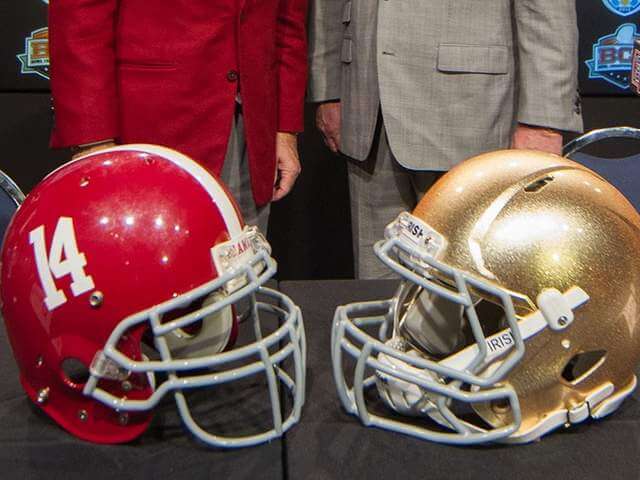 There is one question that everyone who follows the bowls should be asking. If there is only one bowl that matters, why do we have 200,00 of them in the first place? Some of the bowls are set up for those of us who just want to check out the women. There are also bowls that try to help us prove that one team isn’t really as bad as everyone thinks it is. Then there are bowls that help us prove that Goliath is rarely beaten by David.

This year's BCS National Championship is one of epic proportions. The game features two storied programs as the Crimson Tide of Alabama will take on the Fighting Irish of Notre Dame. This game is scintillating because it features two teams that America loves to love or loves to hate.

Many people don’t really know how to feel about this game. It will divide families and friends because everyone will have his or her reason for cheering for a particular team. Some will root for Notre Dame because they are tired of the SEC dominance that has basically run rampant over the NCAA for the past six years.

Others will root for Alabama because they hate Notre Dame with every ounce of their hearts and they can’t find it in their hearts to cheer any other way.

Alabama’s resurgence has been remarkable to say the least under Nick Saban. I wrote a piece earlier in the year explaining how he has revitalized a program and turned it into a perennial power. The Tide came into this season with no real experience on their team except quarterback, and they still found ways to win.

The Irish came basically out of nowhere. In fact, if you would have picked them to win the national championship or even be in the game before the season started, you could have made your family pretty wealthy with a wager in Las Vegas.

College football needed a national championship with two programs like this that travel and support their schools. Both schools will be well-represented at the game.

Alabama does it like the powerhouses do. They run the ball, throw play-action passes and play stellar defense. The formula for success is simple for them, but everything starts with the run. Bama has a dynamic quarterback in A.J. McCarron. He is the reason that they are as good as they are this year. He plays smart, and he doesn’t turn the ball over. Bama also features two of the best runners in the business. Eddie Lacy is damn near illegal, weighing in at about 245 pounds with moves like a little man and power like a freight train. He is paired up with T.J. Yeldon, a dynamic freshman who can do it all. Yeldon will be a Heisman winner before his career is over at Bama.

Notre Dame’s success on offense is very similar to Alabama’s. They do it with the run, and they do it with defense. Notre Dame features a young quarterback in Everett Golson who has steadily improved throughout the year and is capable of making big plays. As much as you like to think offense with Notre Dame, this year’s Irish team features a stingy defense led by middle linebacker, and Heisman finalist, Manti Te’o.

This game is probably going to come down to preparation and defense. The defense that can stop the other team's running game is probably going to win. I give the slight advantage to Alabama even though they are young. Bama should be able to overcome their youth since most of the young players have already experienced a National Championship just one year ago. A.J. McCarron should be the difference-maker in this game. He has pretty good weapons on the outside. I’m not going to sell Notre Dame short. The Irish have the best tight end in the business in Tyler Eifert, who can do damage to any linebacker play that is undisciplined, but ultimately I'm going with the Tide.

One Reply to “Why You Should Watch The BCS National Championship Game: So Much Hate For Everybody”