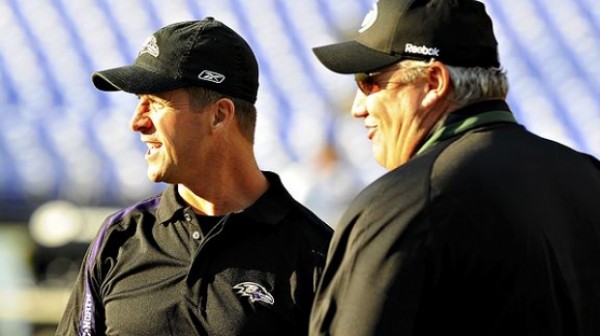 When the NFL speaks of brothers as coaches, no one gets more media hype than Rex and Rob Ryan. The Ryan brothers, who are descendants of the great Buddy Ryan, are the most vocal and borderline obnoxious group of coaches in the league. All they do is talk about success and make guarantees and, quite frankly, they never live up to expectation. Granted, Rex had a good run for the past two years, but he really didn’t do much until the playoffs hit.

Since being hired in Dallas, Rex’s brother Rob hasn’t done much either. The Dallas defense has found a way to lose fourth quarter leads almost all year long. That is something that in the history of the franchise hasn’t happened all that much, but it’s been the norm this season. The Cowboys can’t stop anyone and they seem to find a way to give up the ghost when it matters the most.

The Ryan brothers could learn a lot from the Harbaugh brothers. John Harbaugh has been in the NFL for a few years now. and you never hear of him making a lot of strange guarantees and making himself the show. I guess it explains why the Ravens chose John over Rex to run the franchise. Success is measured by what you do, not what you say, and Harbaugh has found a way to make his team relevant each and every season he has been at the helm.

John’s brother, Jim, came into the NFL this year and took the league by storm. He has revamped the San Francisco 49ers and made them relevant again. He has revitalized the career of Alex Smith and turned him into an above-average, efficient quarterback. He has also done it while not making a mere peep, unless you account for the hand shaking incident between him and Jim Schwartz.

The Ryan brothers and Harbaugh brothers are pioneers in the fact that they are brothers coaching on the main stage. Someday, Rob Ryan will get his chance to lead, and I hope he has learned from some of his brother’s antics and makes it about the team and production. The Harbaugh brothers have it figured out as they live by the old adage “Don’t talk about; be about it.” When the Ryan brothers get that part down, the sky is the limit, because there is no questioning their football I.Q. You just have to pick your poison. Don’t give teams more ammunition than they need. Kill them softly and brush them out of the way.

Like my grandfather always used to say: “If you have to tell them what you will do to them, you probably can’t do it, because if you could, you wouldn’t have to tell them. They would already know it.”

What The Ryan Brothers Could Learn From The Harbaugh Brothers

Football Hustle and Flow: The NCAA Will Not Shoot Themselve…

Basketball What Ever Happened To Earning Your Keep?
5