The Washington Redskins are the most consistent team in football.

You read that correctly. There is no team in the NFL more effective at maintaining consistency in literally every facet of its operations. Even though there are five teams with (barely) worse records, none of those teams feel as dismal. The squad is SO bad at everything you can think of that it’s actually impressive when you put it all together. But how? How can an organization that’s history is rooted in pride and success acquiesce into a mismanaged dumpster fire of a football team? Let’s break it down piece by piece.

The Redskins were shut out by the 5-7 St. Louis Rams, mustering only 208 yards and only handing the ball to running back Alfred Morris six times. Quarterback Colt McCoy, who was inserted in the starter’s role because of Robert Griffin III’s ineptitude, was knocked out of the game and replaced by … Robert Griffin III, ironically. 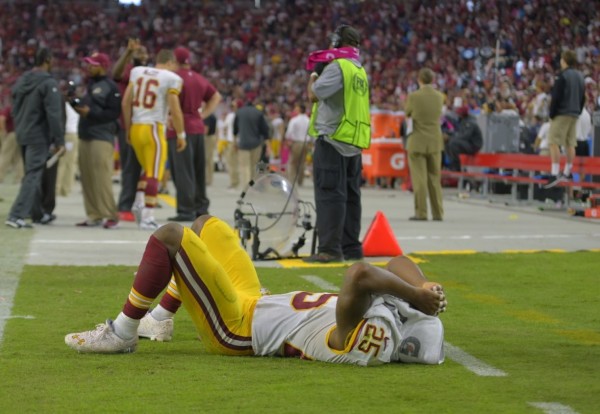 The Redskins' secondary in the last two games has given up 583 yards and 7 touchdowns. Outside of OLB Ryan Kerrigan, there is no player you can truly praise. As a matter of fact, when the defense makes a play, the players actually forget to finish the play.

St. Louis Rams wide receiver Tavon Austin had 143 punt return yards against the Redskins. That was the most by any single player this season. Exceptional work right here by the Fighting Jay Grudens.

Let’s take it off the field.

Head coach Jay Gruden seems to be overmatched, and every strategic move he pulls seems to backfire. The offensive play calling confuses everyone. There’s a rumored rift between Gruden and owner Dan Snyder over RG3. Hell, there’s a rift down the middle of Redskins fans over RG3. The local media takes everything that Robert says and makes sure it’s spun negatively. Snyder and General Manager Bruce Allen haven’t said a word about the turmoil in the organization.

More and more of the world hates the Redskins for not changing their controversial name, and well, this was something that somebody approved.

Oh, and another thing about that controversial name? It might've cost them millions (32 of them) and millions of dollars.

Uh … how about alumni relations?

Former players continue to rip the organization for its poor performance , the latest being linebacker London Fletcher, who absolutely torched defensive coordinator Jim Haslett by saying he was “absolutely clueless.” Happy birthday to Haslett, right? (He turned 59 yesterday.)

Well, they’re pretty good and do a lot for the community. They’re cool.

Bad teams are common in sports. Not everyone can be great. There have to be losers. But the Redskins lose on so many different levels it’s mind-blowing. They have reached Olympic-level dysfunction. Washington, D.C. has gotten used to laughable sports teams over the past 20 years. But the Redskins magically invent new ways to stink it up even when you think, “Gee, that couldn’t get ANY worse.”

The most depressing thing of all, though, is that no course of action really bodes well in any way. Fire a first-year coach? That hasn't made the team better (Marty Schottenheimer was fired after going 8-8). Stay the course? They don’t even know who’s going to start at quarterback next week, let alone who will be the quarterback of the future.

The Redskins' remaining schedule pits them against division rivals, games that are always hotly contested. Fans can only hope that some form of sorcery can change the fortunes of a team mired in inadequacy.