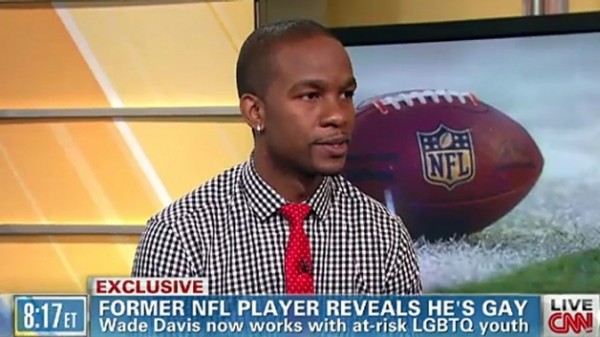 Most of you sports enthusiasts remember a show called “Playmakers” that debuted on ESPN a few years ago. The show was an instant success as a predecessor to “The Game.” It starred Omar Gooding as a star running back, and it had centralized themes that varied from rampant steroid abuse to homosexuality in the NFL. The show was starting to peak, and everyone including women sports enthusiasts were locked in to the plot “Playmakers” was putting out. Then right at the end of announcing a second season we were informed that the show was cancelled.

All the hype went for not as the show was put on freeze by alleged pressure from the NFL to stop the madness and keep the show about football. That’s the thing the NFL has made its money off of; an image. This image cannot and will not be tainted, as the shield is the main concern for protection.

Not many NFL players will come out and profess openly that they are homosexuals. Those of us that played in the league know that there are and forever will be homosexuals in the league. I remember a team that’s entire receiver corps was made up of closet homosexuals, but that is a story for another day.

Just recently, former NFL player Wade Davis came out openly and professed his homosexuality. The thing is, this doesn’t really help the cause of groups who want a stake in a professional sports market, especially since Davis never played in an NFL game.

Davis talked of trying to conceal his homosexuality by hiring prostitutes to come and sit with him to make it look like he was like everyone else. The pressure of fitting in caused him to do things that were out of character to him, but he was determined to not get the notorious “blackballed” label thrown on him.

I guess the plight of the gay athlete can be a stigma, and if homosexual athletes ever want to overturn the trend, they will have to find solidarity and comfort to persevere. However, that can’t possibly happen unless every gay player in the NFL (and surely there are a few more than one or two) would simultaneously come out; they would find strength and support from their numbers alone.

The chances of that actually happening are minimal. The Davis story is in essence a non-story simply because he no longer plays ball and he really never did according to the statistics. So the question continues to be who will be the first football player to declare that he’s gay?

It’s bound to happen sooner or later. The questions will surface, and the teammates will be hit with ideals and questions that will lead to some type of scrutiny that will take a Jackie Robinson like demeanor to overcome. Realistically, what happens to him, both in the locker room and on the practice field, and when he emerges from the tunnel as a member of the home team or, more importantly, the visiting team?

He will have to be someone valuable to the team as Thad Guerwitcz was to his team in “Playmakers” for his teammates and fans to overlook it. It’s sad that in our society we cannot accept people for who they are. People will forever chastise what they see as different.

5 Replies to “Wade Davis, The NFL And Homophobia”

Wade Davis, The NFL And Homophobia

by Joe Simmons time to read: 2 min
Basketball So You Really Want To Blame Russell Westbrook?

Basketball Has Orlando Given Dwight Howard Too Much Power?
5