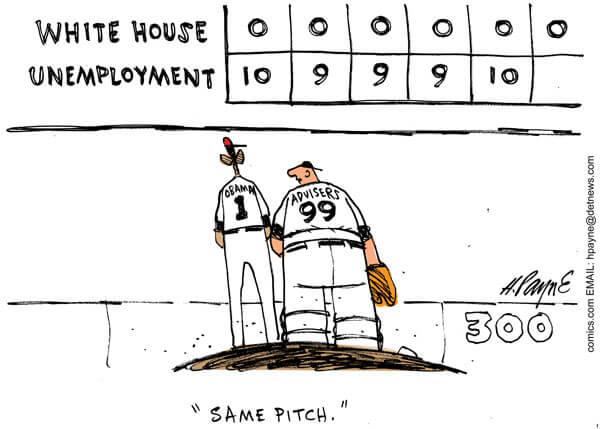 This is a tantalizing look at the employment struggle of black men, whether it be a law graduate or a head coach looking for work in the NFL. If potential racism, white favoritism and the acknowledgment of unfairness make you uncomfortable ... just keep reading. A little discomfort never hurt anybody.

How This Article Came to Be

In May 2012, I graduated law school and decided to move to DC to find a job. I’ve struggled mightily in this quest. I’ve sent out hundreds of job résumés, cover letters and emails with very little success. Today, the game of employment is more about who and not what you know, making my lack of success unsurprising. In still trying to establish myself, I lack the necessary network to keep me on the inside loop of positions that become available. If being unemployed has taught me one thing, it’s that it pays to have built up a network that can help you get where you need to go.

A couple of weeks ago a tweet ended up on my timeline. The tweet dealt with adding “certain people” in a personal network to achieve upward mobility. And by “certain people,” I mean white people. This wasn’t intended to be racist, and I’ll save the “black people don’t want to hire other black people for fear of losing their jobs to said black people” speech for another day. The singular point of this tweet was more often than not, the person who’s going to be doing the hiring and firing is more than likely going to be someone white. I agreed, to a degree, with that sentiment. Later, I was reading a post in the New York Times that begged the question of how social networks are a driving cause for black unemployment. (I’ll touch more on this a bit later.)

Following both the Twitter conversation and the NY Times article, I managed to catch ESPN’s "First Take." During this segment, I was treated to a conversation about the “Rooney Rule.” The host had asked Stephen A. Smith if the Rooney Rule could be improved. What followed was a poignant speech regarding the lack of access given to black coaches to ingratiate themselves among the people who are responsible for the hiring head coaches.

Without doing any research, I’m 97% sure the overwhelming majority of people doing the hiring for head coaching positions are white. I was able to see the parallel between my struggle for finding a job and black coaches struggle for employment as head coaches. The NY Times article, Smith’s comments and the hiring of Andy Reid created more than a few interesting thoughts in my mind. The end goal though was to show that whether it’s a law graduate or a head coach, in order for black men to acquire the positions they want, they need to make it a point of getting in good with the people who control it. And that is definitely easier said than done.

The “Rooney Rule” for the Uninitiated

As told by Wikipedia, the rule was named after Pittsburgh Steeler’s owner Dan Rooney, who was chairman of the league’s diversity committee. The rule had been established to ensure minority head coaches were being considered for high-level coaching positions in the NFL. The rule has changed and expanded a bit since it was first introduced, now extending to all searches for senior football operations within the NFL, regardless of the position.

The NY Times and Stephen A. Smith

In the NY Times article I mentioned earlier, journalist Nancy DiTomaso wrote about some of the causes of black unemployment in the U.S. Black unemployment is, currently, twice as high as the national average at 13%. DiTomaso states while “the most obvious explanation for this entrenched disparity is racial discrimination” she also added her studies had found another culprit for such a disparity: favoritism. Noting that favoritism had a “strong racial component,” DiTomaso states people are playing favorites based on people “getting an inside edge by using friends and family.” Additionally, the racial component is displayed in favoritism because “white Americans tend to help other whites because social resources are concentrated on whites. If African-Americans are not part of the same network, they will have a harder time finding decent jobs.”

Let’s pause and reflect for a moment.

Earlier I spoke on my own personal struggle of finding work. If it hasn’t occurred to you by now, I’m a black man. Though I have all the prerequisite paperwork qualifying me for a number of jobs, I’m having a hard time finding work. The reasoning lies anywhere between being “overqualified” to them respecting my credentials but finding someone who’s “more closely associated with the written job requirements.” I don’t write any of this with anger or malice. I’m simply stating getting jobs “the old-fashioned way” isn’t effective. If I looked like the people who were interviewing me or reading my résumé (or if they’d known me and were more comfortable with me), I’d likely have significantly less resistance in acquiring a position.

On "First Take," Smith made a point about his earlier career as a journalist and how he landed on ESPN. Smith mentioned individuals and higher-ups he worked with, thanking them for giving him the opportunity to ingratiate himself. Smith talked about getting chances to shake hands, go to dinner and build relationships with powerful people who were able to put him in the position he was in. Smith acknowledges the importance of how his powerful social network took him from a regular journalist at the paper to live ESPN programming.

Smith’s take on the building of relationships in addition to DiTomaso’s Times article all provide an appropriate backdrop for a later point made on "First Take."

The Curious Case of Kansas City and Andy Reid

On "First Take," Smith used Andy Reid’s hiring as an example of how black head coaches (which could be seen as a microcosm for black unemployment and people like me overall) are at a disadvantage when it comes to high-level positions.

While pointing out Andy Reid’s 12-20 record over the last two years, Smith exhibited disbelief at Andy Reid’s smooth transition from one head coaching position to the next. In a span of five calendar days. As Smith excitedly stated, “... I don’t know of any black man in professional sports who’s been fired and gotten a similar job as a head coach in five days.” Smith said it wasn’t so much Reid receiving the job, but the quickness in which he acquired the position. Smith elaborated further, “The fact that it took five days is indicative of a clear relationship that [Andy Reid] must have had prior to landing the job and the manner in which he ingratiated himself.”

It should be noted here, I have no qualms about Andy Reid receiving the job with the Kansas City Chiefs. If that’s who they wanted to be their head coach, they’re well within their right to do so. If they didn’t want to hire any other coach for their team because they didn’t believe anyone else to be the right fit, so be it. The speed in which Reid was hired, however, did give me pause. While I have no way of actually knowing how long the Chiefs had Reid on the radar, giving him the job in five days would at the very least imply a relationship between the two.

Smith concludes this very point by insinuating the same type of favoritism discussed by the NY Times piece is what’s rubbing black people the wrong way. “It speaks to that’s where black folks sit back and say ‘there’s a problem here ...’ If it took 2-3 weeks to search and they hired him, [black people] are fine with that. The problem is when it clearly appears to be about the relationship, that’s where we feel defeated, because we’re wondering, 'How the hell can we put ourselves in that position?'”

Whether you’re a freshly graduated black law student or a black head coach with a winning record looking for work, you’re simply not going to get far based solely on merit. DiTomaso makes that clear, writing, “In this context of widespread networking, the idea that there is a job 'market' based solely on skills, qualifications and merit is false. Whenever possible, Americans seeking jobs try to avoid market competition: they look for unequal rather than equal opportunity.” To sum everything up in a neat cliche, it ain’t what you know. It’s who you know. And if you don’t know anybody, you better look like the person who’s doing the hiring.

Skip Bayless mentioned the pipeline for black head coaches and other high positions within the NFL has never been larger. This is a good thing. If social networks are of high importance and being comfortable around the person you’re interviewing also matters, then the more people of color allowed into said offices, the more plentiful opportunities there will be.

As I spend my days hitting the “pavement” job searching and my nights contemplating the meaning of life, I pray I’m making the right moves to enter the workforce. Much like the black head coaches still looking for work in the NFL, we might be in two different leagues, but we all in the same boat.

5 Replies to “Unemployment, The Rooney Rule And Making The Net Work”