Fantasy football roster moves do not stop Tuesday night when waiver wire moves are processed. If this week taught us anything, it’s that moves can be made last minute. The Seattle Seahawks found out that all three of their running backs would not be available and Deejay Dallas got the start. Dallas is still only owned in 11% of ESPN leagues. This shows that people still didn’t get enough time to add the newly-anointed starting running back. Even as of publishing of this article, there is still no definite answer for numerous questions regarding some personnel:

Here are some recommendations to consider before you submit your waiver wire claims for the week.

Like many teams on Sunday, the Bills and New England Patriots faced very harsh weather conditions. With bad weather comes a reliance on the run game. Buffalo has struggled this season to establish their run game, but Moss helped out a lot on Sunday. Moss and starting running back Devin Singletary both finished with 14 carries apiece. One thing that makes Moss desirable is his usage in the red zone. Moss had two touchdowns on the day while Singletary has one touchdown the entire year.

Moss scored 20 points in standard, which is pretty good for a goal line back that has to compete with Josh Allen for rushing touchdowns. It looks like Moss will have to rely on red zone touches, but the Buffalo coaching staff looks to trust him with that responsibility.

Speaking of Buffalo and New England, another player from that game caught the eye of fantasy owners. Harris had a great game with 102 rushing yards to go with a touchdown. Fantasy owners enjoyed a 16-point game on the day.

Harris had been injured for a majority of the year but has produced ever since he came back. He has gone for two 100+ yard games while averaging 5.7 yards a carry in the four games he played this season. Look for Bill Belichick and company to feed Harris the ball more.

Rookie quarterback Justin Herbert has been on fire this year and looks to be the front runner to win Rookie of the Year accolades. One of his favorite targets is Mike Williams and this past weekend showed it as the big wideout had 99 yards and a touchdown, translating to 16 points in fantasy. Williams has had his ups and downs like any other player, but he’s had 20 fantasy points each of his last two games. If available, he should be a top priority especially if you need a wide receiver.

The former top five pick in 2017 has finally having a breakout year of sorts. Davis has been frustrating to own in fantasy leagues since his rookie year. It seemed as if he could just never out it together, and having second year receiver AJ Brown leap ahead of him in the depth chart didn’t help. In five games this season, he has averaged 10 fantasy points a game. Against the Cincinnati Bengals, Davis had 128 yards and a touchdown, capturing 18 fantasy points in the process.

With a win over Dallas on Sunday night that propelled the Eagles into first place in the woeful NFC East, it seems that everything is sunny in Philadelphia, right? That’s not entirely the case. Long time starting tight end Zach Ertz was sent to the injury reserve list and will not return until much later this year. Next man up is a very capable tight end in  Goedert. This past game against the Cowboys was his first action since Week 3, yet he only garnered a single 15-yard catch.

Quarterback Carson Wentz had a hand in the Eagles selecting Goedert in the 2018 draft. That relationship will help Goedert to get in rhythm. Look for Goedert to have better games in the near future and a fantasy replacement for George Kittle.

THE BILLS ARE GOING TO THE AFC CHAMPIONSHIP ♨️ 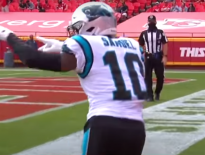 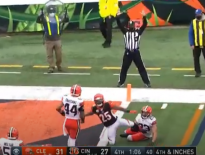