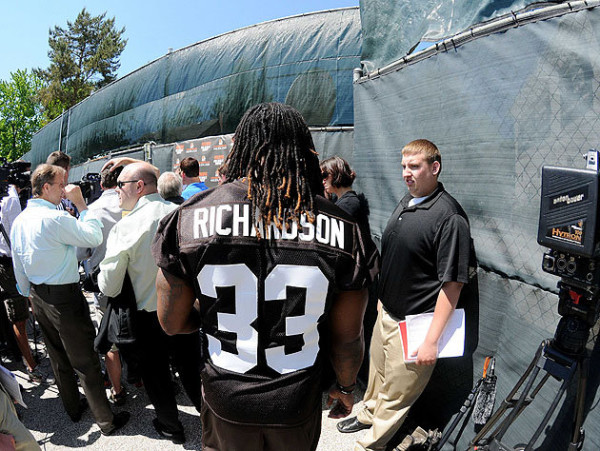 Trent Richardson is an Indianapolis Colt.

In a move that said “Hey, Teddy Bridgewater. You’re going to be a Cleveland Brown,” the Browns have given up Trent Richardson (the 3rd pick in the 2012 draft) for a first round pick in the 2014 NFL Draft. Because it’s the Cleveland Browns, I think it’s safe to assume they likely don’t know what the hell they’re doing. With that said, I’ve taken the liberty of creating five “butterfly effect” scenarios of this trade.

1. The Browns are officially in the sweepstakes for Teddy Bridgewater.

I mentioned this in the opening paragraph and I’m mentioning it again here. The ineptness of the Jacksonville Jaguars (sorry, Ed) almost ensures they would been in contention for the first pick of next year’s draft. Seeing as how Brandon Weeden is about 65 years old, it makes sense that if the Browns believe Bridgewater to be a franchise QB, they need to better position themselves to get him. If I’m a player for the Browns, there’s no way I’m giving full effort for the rest of the year in  a season where management clearly doesn’t give a damn. Therefore, the trade has effectively put the Browns in the Teddy Bridgewater Sweepstakes.

2. The Colts could possibly be a contender in the sort-of near future.

I’m not sending the Colts to the Super Bowl just yet, but it would appear as if they’ve found a franchise-caliber running back to go with their franchise quarterback. Vick Ballard recently went to IR with a torn ACL, leaving the Colts with three backs. Ahmad Bradshaw is 27 and has TWO seasons in his six-year career rushing for over 1,000 yards. His best season came 2010, where he rushed for around 1,200 yards and nine TDs. Richardson ran for a little less yardage (around 950 yards) but had more total TDs (11) in a system where he was the lone threat on offense. Backing up Bradshaw is Donald Brown and Kerwynn Williams.

The Colts went from having a Manning-James-Harrison combo to a Luck-Richardson-Wayne combo. If the Colts manage to attract a young stud receiver to add to their lineup and find some ways to improve their offensive line, this move could provide to have quite a fruitful pickup in the future. All speculative of course, but there could be something special brewing in Indy.

I don’t know if they’re the worst team in the NFL (sorry again, Ed), but they’re pretty damn terrible. There’s no such thing as tanking for the Jaguars, because they don’t really have enough to compete with anybody. What other teams call tanking, the Jags call their regular season. (Okay...that was a cheap shot.)

Be that as it may, if the Jaguars somehow lose out on Bridgewater, where will they go from there? Who else can the Jags draft that will be able to make an impact on the team? Let’s say the team loses out on Luck and drafts Jadaveon Clowney (assumed to be leaving after this year). How is that going to help them? Wouldn’t we just expect them to stumble through another season of possibly ending up in the top three picks and watching them whiff at picking someone again?

If it seems like I’m beating up on the Jaguars...I am.

4. Thank you Mr. Weeden, but your services are no longer needed.

One must assume that since the Browns mortgaged this season for Bridgewater, Weeden is on his way out. Since he’s only in his second here, I’m going to assume he has a couple more years on his deal until he becomes an actual free agent. He hasn’t been in the league long enough to serve as a mentor of any sort, as his play shows he could use some mentoring of his own. I have to wonder if the Browns are thinking about doing. He’s clearly expendable and I’m not sure if he has any real trade value. I guess he could always play for the Jag...Alright. Alright. I’m not going to say it...but don’t act like you weren’t thinking it.

5. Everything works in favor for the Browns.

Try not to laugh too hard at this one, but let’s think about it for a second. Let’s say Trent Richardson doesn’t work out for the Colts. And the Browns get Bridgewater. And fix their offensive line. And sign a decent running back. And some good receivers. And pigs fly, hell freezes over, cows come home, the fat lady sings, and Kobe leads the league in assists...okay. Too far.

But seriously, the Browns have been “Browning” for quite some time. I’ve been alive for almost 28 years and I can’t ever remember them being relevant. Desperate times always call for desperate measures, and if the front office thinks Teddy Bridgewater is the key to their salvation, then hell, more power to them. I’m sure it doesn’t endear them to the fans, but if you’re still a Browns fan after all this time, chances are you aren’t going anywhere anyway. But if it actually ends up working out, management will come out looking like geniuses.

I just doubt it ends up working out.

Time will tell whether this move was the best move for the Cleveland Browns to make. My first inclination is to believe the Colts got away with one here and Cleveland has effectively made this entire season worthless to both its players and fans. I’m not even a fan of the Browns, and I feel somewhat hurt by the move. To trade away such a young asset at this time in hopes of landing someone next year seems to be a huge gamble. But hell, I’m not an NFL GM and those people get paid way more than I do to make these decisions. I just hope they know what they’re doing.

***It should be noted that Bridgewater is only a junior and has one more year of eligibility left at Louisville. It would be terrible (and fitting for an organization like the Browns) if Bridgewater decided he wasn’t coming out this year. If he decides to stay, please come back to this post. It won’t be hard to find because the link for this post will be included in a post titled “The Browns Gon Brown.”