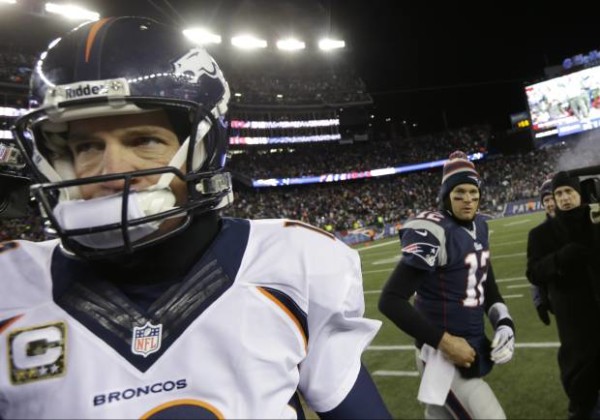 In this age and this America, the entity who took his seventh day for rest would likely turn on CBS around 3 p.m. to see his golden boy creations take snaps, yell “Omaha,” get faked out for high-fives and aim for the Super Bowl.

After all, the six days were taxing enough. After all, it’s Tom Brady and Peyton Manning.

One would have to go back to 2007 to find as good a quarterback match-up in a conference championship game. Like Sunday’s game, that edition featured Brady and Manning. To go even further, the 1998 NFC title bout between Brett Favre and Steve Young would certainly qualify.

Sometimes, the match-up we want is the one most elusive. Sunday’s quarterbacks have appeared in four of the six final AFC games since the ’07 contest. In a blur-like state, we’d be compelled to think those appearances came against one another. Now, we stand at one of — if not the — final curve of Manning’s career.

Fittingly, the man who’s played his foil for so long is the hurdle left to leap. If we were to masculinize the match-up, we’d see John Wayne and Clint Eastwood in a showdown and six-shooters. It seems more likely that Peyton resembles Billy Crystal, while Tom Brady is Tom Hanks. Both will seek Meg Ryan — and yes, this parallel universe has made a former star actress into a football trophy — and for different reasons, every football fan has picked a character he or she prefers.

There are few unalienable rights that come with gridiron fan membership. One of them is the necessity to have an opinion on Brady or Manning. You can like one more than the other or dislike both with an idea of which is superior. It’s inescapable from the moment the fantasy draft kicks off to the final whistle of the season. Someone must be better than the other. Someone must be less worthy of the crown.

It’s possible in 60 years we look back and forget these men because football became a sport decided on the first team to score 100 points. The term “defense” will likely die somewhere along the way, the same way the wishbone seems something out of a black-and-white movie. However, it seems that what these two men have done will go down in the books forever.

In that vein, this is less different than Larry Bird versus Magic Johnson than we’d like to believe. From all accounts, the height of the rivalry existed as such not because both were great players (if we look through history, it’s easy to see rivalries full of great players). Rather, we remember this culture-changing phenomenon due to the fact the two players had distinct rooting sections. Let’s leave race out of this — although it provided some of the fuel — and look at it from the fan in a veil of ignorance in Natchez or Ketchum or some other random spot on the map.

Someone somewhere came up with the idea that Bird was the best player in the world. Someone in another where decided it was Magic. This idea multiplied and exponentially grew as the two got better and better. When they played one another, much more was at stake than the O’Brien Trophy. A legacy and a crown of proof awaited them.

When we mix in this element of understanding with that of Americana, the whole damn thing makes much more sense. Since the days of football’s mainstream acceptance, the All-American boy lived next door. He possessed a keen sense of humor and a perfect smile. He quarterbacked the local high school team. He is the man many see in their dreams when wondering when their Manning or Brady will one day be drafted by their favorite franchise.

These two quarterbacks seem as shiny as a newly minted coin for which the position is named. One is a calculated, rambling, supposed humorist who is a student of the game from birth. He’s the son of a professional quarterback and the brother of another. This was his destiny, and he’s well-vested to fulfill it. If there’s one thing Peyton Manning knows aside from acting in commercials, it’s how to be a quarterback.

Brady is the California boy. He’s also calculated, although he seems less friendly. He too lives a version of the All-American dream with his supermodel wife and three Super Bowl rings. He was drafted late — unlike his counterpart — and found his opportunity by chance — unlike his counterpart. His chin dimple and Uggs fool no one who knows better. He knows damn well how to be a quarterback.

For all that we know of the two men, it seems they have been a part of our lives from the first time we stood for the National Anthem. When barbershops opened on Monday, the chatter likely revolved around who would win, why, and then the conversation eventually tumbled down the slope into who was greater.

That’s the way these things go. A man plays a man with greatness on the line. It’s America versus America, and it’s the Americans who get to eat their greedy little hearts out.

There will be linebackers, cornerbacks, running backs, linemen and plenty others in the fold. However, no one will ever chalk up Sunday’s win to Knowshon Moreno or Kenbrell Thompkins when they recall the possible final battle between Manning and Brady. They’ll remember Tom’s steadfast presence despite one tight end on the disabled list and another in a cell. They’ll remember Peyton’s audible for the  game-winner to an athlete once best equipped for basketball.

When the Lord kicks up his feet and watches the American Dream, he’ll know he’s done well for his fellow football fans. As the country worries about ifs and buts and a future that never seems quite as bright as it did before, a few hours will be enough to forget. Each moment will also be enough to remember for ages.

God will relax, because that’s what the seventh day is for. By the time the rest ends, he might even know which quarterback he prefers.

4 Replies to “Tom Brady, Peyton Manning And The Match-up Made In Heaven”