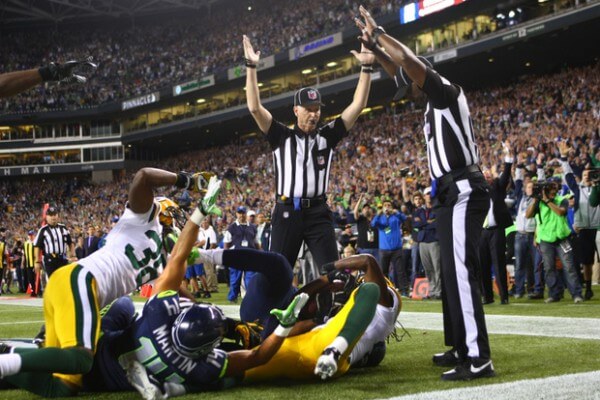 The pitchforks have been hoisted. The torches have been lit. The lynch mob is out.

Apparently, the NFL replacement officials aren't any good. It doesn't take a neurosurgeon to figure it out. They've blown calls, made up rules, and Monday Night they cost the Green Bay Packers a win.

**Author's note: We're going to ignore the fantastically awful offensive line play in the first half that allowed eight sacks and just pinpoint the game's result to one play. The play will live in infamy, while Aaron Rodgers will just live in pain.**

As soon as the "officials" in Seattle ruled that Golden Tate scored the game-winning touchdown, chaos ensued.

Fans, players, talking heads, and anybody else with an account berated the call. The reaction was certainly warranted.

It's been a talking point for a few weeks now, and it's not going away. The biggest reason is that everyone is losing.

However, an argument could be made that the ratings machine isn't losing. More and more fans and observers tuned into SportsCenter Monday night after the game to catch some of the fallout.

The NFL is entertainment, and it provided some quality drama.

Although the viewership was certainly high, let's not get things confused — everyone is losing.

Fans are losing respect for the league's "integrity." Instead of being upset about the integrity when the league refuses to put concussion specialists on sidelines, they see it now because it's affecting their satisfaction.

Players are losing, and not just the ones who play for Green Bay. They're frustrated, and it's coming out during the games. Each game seems to turn into a fight and he-said-she-said that has been blown out of proportion. Players are even taking to Twitter with expletives toward the league with no regard for the punishment.

Fine us, they say.

Fine us, they will.

Their coaches — predictably — are frustrated as well. They are often explaining the rules to the officials on the sidelines.

The man in charge is losing as well. Goodell, who had plenty of enemies to boot, is in the cross-hairs of the viewing public. Change it, the people beg. Get our refs back, the players pine. He's got to do something, the talking heads say.

It has become a diversion from the season itself. No longer does the top headline need to be about the results. Instead, a handful of examples about the horrific calls has become customary.

The refs on strike are losing, too. They're getting the mail that doesn't have checks with their names on them. When they turn on a game, they're watching their occupation fall to pieces. No ground is being made on a new deal, and many are probably chomping at the bit to get back out on the field. They just want a fair shake.

Perhaps the biggest losers in all of this are the replacement referees. They do what they can, but they can't do enough. Under-prepared, they trot out on the biggest stage in American sports and embarrass the game.

Venom is continually spewed in their direction as if anyone other than the real refs could do any better. They aren't trying to screw up; they just aren't qualified. The NFL's distinct rules are difficult for them to grasp.

Someone who knows how to record videos on his or her smartphone shouldn't be directing a feature film.

The replacements are fumbling the ball while everyone joins the dog pile on top of them.

A final meeting must be had, and the sacrifices must be made by the league. Although financials are the bottom line and have driven this situation, a greater need must be met than a ledger.

Football must get back to being football. Too many people are losing with the product the way it has been this season.

If not, more disaster awaits. It awaits with the lynch mob.