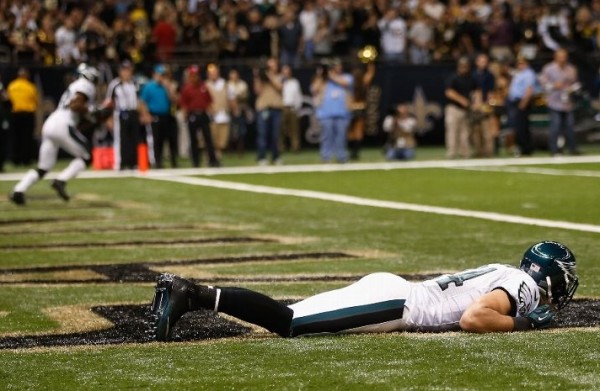 "Well, unfortunately it's out of your hands," a text message before Monday Night Football read.

The message was in response to the nervousness that came before the Philadelphia Eagles next game in New Orleans.

Out of your hands.

That's the reality. For every moment that feels like a team is willed to victory, there are dozens that end up helpless. No control exists over a football team. Although control seems achievable, it doesn't exist. Moreover, it never will exist.

The routine of dressing seemed depressed. Perhaps it was the daylight savings that dropped the sun lower than usual. The absolute of darkness loomed over the afternoon like a cloud.

It felt like preparation for a funeral. A funeral for a friend. A funeral for a football coach who guided the team successfully for over a decade. Perhaps a funeral for a quarterback as a starter. The funeral would also be held for a 2012 season. A season that started with wins but problems.

The 2012 season has been a poison pill for Eagles fans. The ups aren't very high, and the lows keep getting deeper. With no cohesiveness, little heart and even less luck, the team that once seemed a strong pick faded. The ability at some places wastes away. Lack of ability at other positions becomes more and more apparent.

There was no way to feel encouraged about the game in New Orleans.

Dress up. You can't look shabby at a funeral.

The funeral started like a party. A strong drive, a defensive stop and another drive. In the red zone, it was a certainty that points would be scored.

A tip from Brent Celek found the outstretched arms of a Saints defender. From the goal line, he breezed down the sideline. To add insult to injury, Michael Vick was hit for a personal foul trying to make a tackle on the return. Vick's pass grazed Celek's hand and found the defense like it was made to be that way.

It's out of your hands.

It's out of Celek's too.

A field goal by the team in white. Although draped in white like the "good guys," this edition seems far from it. On the other side, the Saints wore all black.

New Orleans' football team had shown fight. Despite a tough start with many extenuating circumstances, the Saints kept marching on. With a quarterback few dislike, the team in all black clearly stood as the good guys. The quarterback in black led the Saints down the field for another score.

Suddenly, the funeral had reached the point of reality. The corpse on the sideline and field was no longer anything that resembled what it was in better days.

No, the struggle of pain and anguish had engulfed the entity that was once a dear friend.

As politicians invaded the sports fan's sacred realm at halftime, all hope vanished.

After the half, Philadelphia forced a normally unheard of red-zone turnover. The 77-yard touchdown pass two plays later seemed to signify a spark. The fumble recovery on the next play made the spark larger. A field goal kept the spark alive.

The team in black snuffed it out. Another score put the game pretty much out of reach for this year's Eagles. The old teams could have rallied. In fact, the one Philadelphia team that was never out of it had magic in its cap. 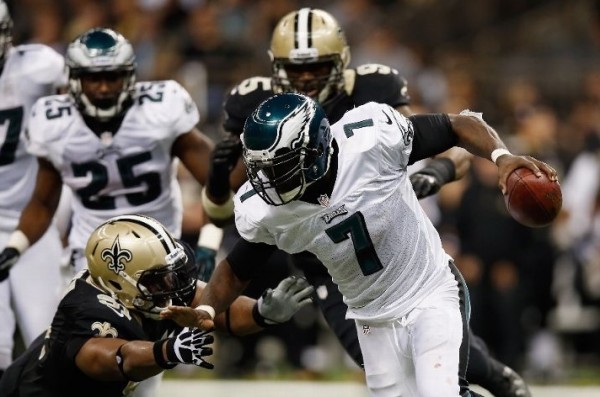 That team had character and an undying need to win. They pulled things together and played above what they were. It was a magical time to be an Eagles fan.

It was a time when the opponent and the score didn't matter. It always felt like the team could find a way. The 2012 edition brings no such hope.

As Vick took more hits, the Eagles flamed out. They ran a beautiful trick play on a kickoff that went for a touchdown. It was called back due to penalty.

Everything that could go wrong on a football field goes wrong with this year's Eagles.

Things aren't much better off the field. Quarterback controversy, a coordinator fired, a city and fan base spewing anger at the coach. The very coach who was once considered a close friend.

After the game, frustrations boiled over into sadness. Of the things loved, perhaps none aside from family had been loved more.

Now, the loved ones were a shell of what once was. Melancholy ran deep. On the doorstep of apathy, memories of the good times became necessary.

Although exhausted, all a fan could do was sit in front of the television for 60 minutes. Full effort, concentration and poise was exhibited by the fan dressed in green and black funeral apparel. No one could question the dedication and work ethic of the fan.

There he sat, bewildered. Frustrated and flustered at the state of his loved ones. How could it all go wrong? Where didn't it go wrong? Too many answers existed. It was the lowest point of the season. Each answer was worse than the last.

Worst of all, it was out of his hands.

It will always stay that way.

7 Replies to “The Philadelphia Eagles And Their Helpless Fans”