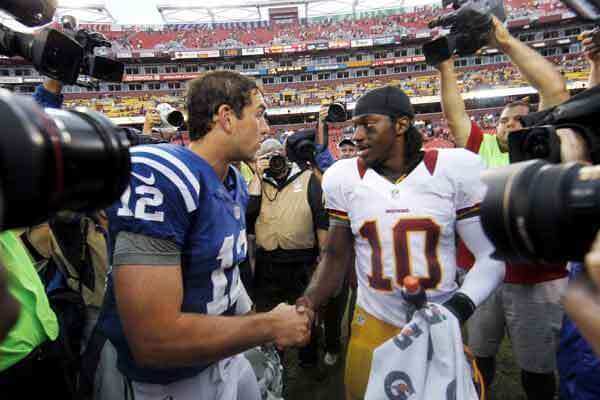 A consistent trend is that very few rookie or second-year quarterbacks get the nod to start in the NFL. There is usually a learning curve that is expected to take place before a player is handed the keys to the franchise.

The exceptional player is the exception, and that guy usually struggles before he breaks through. Oftentimes that guy will crumble under the pressure as well and becomes a shell of his former self, like David Carr did when the Houston Texans drafted him.

Well now things are a changing. Ten rookie or second-year quarterbacks will start opening day in the NFL. That is almost unheard of in the league, and it speaks to the lack of talent at the position for the past few years that kept guys in the NFL far past their primes. Guys like Brett Favre and Kurt Warner were able to keep jobs past their primes because they still had more talent in them at elderly ages than the group of guys who were drafted a decade after them.

In fact, when you look at the success rate of guys drafted five years after the Peyton Manning era began, you can count on one hand how many of those guys are still in the league.

The trend peaked last year when Cam Newton and Andy Dalton had successful seasons as rookies. Now their draft counterparts Jake Locker, Christian Ponder and Blaine Gabbert will join the ranks of starters in the league.

As good as the 2011 class was at production, the 2012 class seems to be just a promising. Andrew Luck and Robert Griffin III were automatics to start as they were going to be the face of their franchises. Who knew that Ryan Tannehill, Brandon Weeden and Russell Wilson would join them as starters as well?

What has brought about the evolution of the young quarterback? You would think that the transition would be harder for these guys since most of them don’t come from pro-style systems. Most of them come from spread offenses and run combination offensive schemes that don’t mirror anything similar to what they run in the NFL.

On the surface it may seem that way, but in reality these offenses make quarterbacks more aware of blocking schemes and teach them how to read coverages better. College defenses have become as complex as professional defenses as many former pro defensive coordinators have made their way into the college game. This has made college coaches teach college quarterbacks more about coverages and help them understand why they are making the throws they are making versus just telling them where to throw the ball.

In fact, you could argue that college coaches are better across the board. Even though there has been more recycling than most would like, you have to admit that players are coming to the NFL more polished at all positions and more pro-ready than ever before.

One of the things that I have learned in my many years of being involved in the sport is that the best way to learn is through trial and error. You get better by playing and playing against the best competition. That can’t really happen in practice so putting these guys in the line of fire immediately is essential.

However, you don’t want to set them up for failure. Coaches understand that they may be mortgaging their futures by starting these young guys, but they also understand that you can’t pay these guys all that money and have it sitting on the sidelines with a headset on.

Some of these older guys better brace themselves, as another stellar class is on the horizon led by USC's Matt Barkley. Getting your act together may not be enough. This youth movement is real. Other guys that have been staples like Peyton Manning and Tom Brady may be at the end of the line as well as their backups were a part of last year's barn-burner class, and judging by the preseason they are primed and ready for some major action at a much cheaper price tag.

Sometimes you have to look at what you have and ask yourself if what you have can get you what you want. If the answer is no then why not give a young guy a shot?

3 Replies to “The NFL QB Youth Movement: Out With The Old, In With The New”