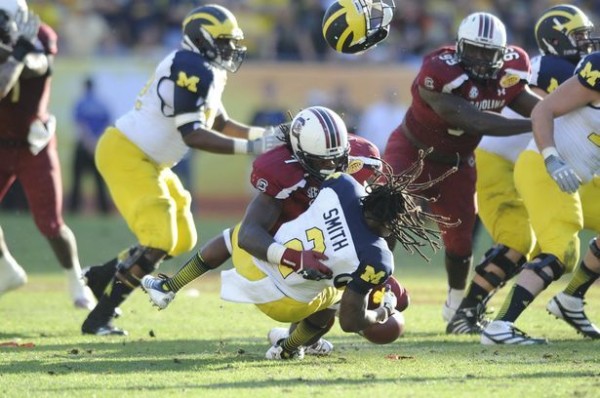 My biggest regret of 2013 was not seeing Jadeveon Clowney's now iconic hit on Michigan's Vincent Smith live. How do we know it's iconic already? Two reasons. One, because all that needs to be said are the words "Jadeveon Clowney hit." It's something of an instant audio Google search. Each result is a different person giving his or her own recollection of the hit and where that person was when it happened. Watch the look on a person's face light up. Whether seen live, via .gif or YouTube, we all saw the hit that very same day and we all said the same thing, "OH SHIT!" And two, the only play that's even in the same ballpark is Ray Allen's series-saving three pointer at the end of regulation of Game 6 of the NBA Finals.

Jadeveon's become an urban legend since then, too. He's already expected to be one of the top five picks in next year's draft (if not #1) as well as being one of the "must watch" players heading into this season. Clowney's exploits in the 40-yard dash have turned the South Carolina freak-of-nature into a bona fide walking, breathing Area 51 project. He's two inches shorter than LeBron, 20 pounds heavier and maybe a half step faster whose sole job is striking fear in opposing quarterbacks', running backs' and, hell, since he's fast enough, some wide receivers' hearts.

And you know what sucks the most about this? The NCAA just implemented the "Jadeveon Clowney Rule" to make sure we're all miserable.

Yesterday, news spread the NCAA would be implementing a "targeting" rule this season which basically states a player can be penalized for striking too high to the chest and driving through on a tackle, which could lead to head-to-head collisions on a defenseless player. The penalty, you ask? Not a 15-yard assessment. Not an automatic first down. But an ejection. That's right, an ejection. As in a defensive player could be tossed out of a pivotal game at a critical time for a tackle he's been taught to make since little league.

The higher-ups, better known as the "powers that be," are trying to make football a "safer" game both on the collegiate and professional levels. Their lengths to do so are commendable given the horror stories of brain trauma told long after playing careers came to a close. Some fail to remember how to find their mailboxes from the front door, while some find it difficult to get out of bed every morning and still others — in the most extreme cases — take their own lives to alleviate the pain. It's an extremely serious issue for an extremely violent game.

However, when is enough enough? Leading helmet-to-helmet, fine. That's understandable and should be enforced taking into account a person's brain is at stake. But this rule? And making the penalty worth an ejection? In college football, tossing a player could potentially mean the difference between a national title birth and a Cotton Bowl appearance. Being an enthusiast of the sport who trashes generations has never been my M.O. — to be one of those guys who say "back in my day" — but it's getting to the point where the nature of football is being replaced by ill-advised nurture. At what point will two yellow flags attached to a player's hip replace knee pads? Or will two-hand touch replace shoulder pads?

It's the same argument that's been run into the ground for years now, but it's still just as relevant. There's no way a defensive player can, in the heat of a game, think to himself he shold refrain from a potential hit that could trigger his team emotionally. Again, it's nature vs. nurture. And in this case, it's anti-productive nurture. The decision to implement the rule has floated around for months, but why now is it becoming an issue — a month before the season is to start? 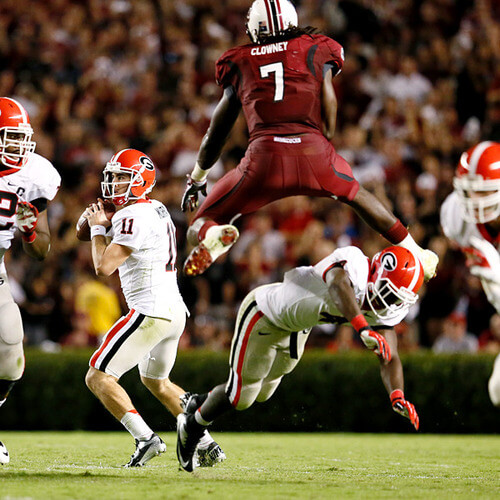 Violent hits occur every weekend in a sport that all but leaves the playing field open to do so. Yet, the NCAA has benefited all year from a) the constantly growing celebrity of Johnny "Money" Manziel and b) Clowney's New Year's Day massacre. Count on your hands the number of times random footage of college football has been shown this year and count on those same hands how many times Clowney's hit has been a part of the packaging. Exactly. The plan's been all along "create revenue and keep the game's name relevant during the dormant months, but outlaw the very same play to avoid negative backlash during the season."

The NCAA is better off  calling the rule what we're all going to remember it as anyway. Instead, officials will devise a well-thought-out response saying this decision does not come from one play or one player, but a culmination of footage they've tirelessly scoured all offseason. The public's response? As Clowney's potential future agent, Jay Z, once claimed, "You can't sell us bullshit, we know the prices."

Moving along, three additional random thoughts about the "Clowney Rule" are laid out below. Before that, however, SBNation asked Fox Sports officiating aficionado (say that five times fast) Mike Pereira how he would call the Clowney hit this year. He responded by saying, "If I'm an official, based on 'when in doubt,' he's out. He's ejected. And when that goes to replay there's no way they overturn it. There's a great potential that hit causes an ejection this year."

1) Admittedly, Pereia was unsure how he'd call the play even with that quote. But let's say Clowney power bombs someone Vincent Smith-style this season because nine times out of 10 it's going to happen anyway. Is it Clowney's fault he was left with a wide open lane to the running back because the offensive lineman took on another blocking assignment? Is Clowney supposed to pick the running back up and carry him across the threshold like a groom does his wife upon returning back from their honeymoon? Or if he hits a running back or quarterback with the same ferociousness because he, himself, got there on his own free will, should he expect an ejection?

Or — forget Clowney for a moment — if a special teams player can spring his return man for a touchdown by delivering a huge block to the chest on an opposing player not keeping his head on a swivel? This has "disaster" written all over it.

2) Jadeveon should be carted onto the field for at least the first game the same way Tommy Davidson was carried into the death pit to fight Jim Carrey in Ace Ventura: When Nature Calls. Or better yet, imagine being an opponent having to look Clowney in his eyes hearing Ivan Drago's theme music play before each important offensive snap. There's a good chance, too, I'd literally shit myself if Clowney lined up against me with Goldberg's theme music blasting from the stadium's speakers. South Carolina has a legitimate shot to turn this guy from a football tyrant into a pop culture icon if the on-field success lines up with the hype.

3) The NCAA outlawed the "slam dunk" because of Lew Alcindor's dominance following the 1966-67 season. The NBA unofficially accepted the term "Hack-A-Shaq" after Larry Bird and the Pacers exhausted every possible option at stopping Shaquille O'Neal in the 2000 Finals. Major League Baseball lowered the pitching mound prior to the 1969 season due to Bob Gibson's stranglehold on the National League a year earlier. As much bitching, groaning and moaning that'll come from the announcement of this rule change, Clowney has already become a college football legend. Whenever the game you play attempts to alter the rules because of the way you play, you're always going to be remembered. #FactsOnly (sorry, I couldn't help it).

The "Jadeveon Clowney Rule" appears to be here to stay as long as Big Brother NCAA has anything to do with it. At least until that one referee tosses a player at the worst possible moment, ultimately deciding the outcome of a game and season. And from there, the NCAA will be at the wrath of a machine even more intimidating than itself and its multibillion-dollar establishment — Twitter.

Just ask the NFL how trying to alter the flow off a game with new intangibles went last year. That replacement referee initiative worked out splendid, right, Packers fans?

6 Replies to “The Idiocy Of 'The Jadeveon Clowney Rule'”