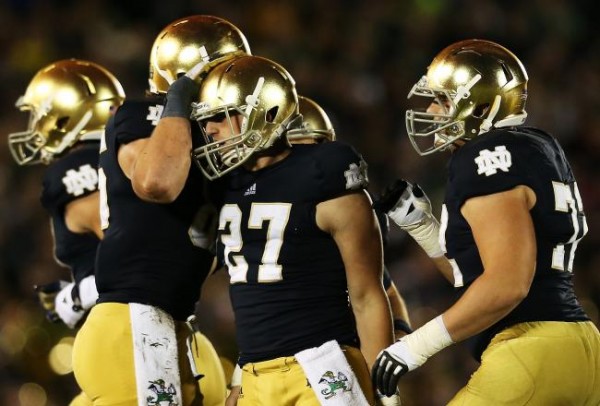 I know what it is. I know a bit of what it represents to people. I know everyone aside from Fighting Irish fans hates Notre Dame.

Perhaps it's because I've never met an alumnus of the Indiana school. I heard that those who gain their diploma from South Bend are pompous. People tell me most of their fans are jerks, pretty much because they root for the gold helmets.

There are numerous occasions when I've been made well aware about their independent status in college football. Like Navy, the Irish are independent. They control their own schedule. So, I'm supposed to hate them for their ability to select opponents.

Of course, Notre Dame has had its own television station. It's not a station I tune in to when the Irish play, so I'm not sure how much it affects me. Texas also has its own TV station. Many people hate Texas. Maybe TV is the reason I'm supposed to hate Notre Dame.

Notre Dame plays by different rules than every other university on the gridiron. I've seen a few Irish games in my time, and I don't remember a different set of rules being given to me.

I don't understand this aura that Touchdown Jesus resembles. It's hard for me to fathom.

The football program at Notre Dame certainly garnishes its fair share of attention. Despite being on the outside of national relevance in recent years, the Irish remain in discussions until they lose.

Many other teams do the same, yet I don't hate them. Few people tell me to hate those other schools.

But, I don't tear up because Rudy wears a golden helmet and plays on God's turf. That seems like a minor detail to me.

Now is the time when the hate for ND boils back up to the surface. It has been within many a football fan in recent years. Since the Irish are relevant again, fans are ready to let the disdain overflow.

I suppose the representation of being the Dallas Cowboys or New York Yankees of college football is the reason. If that's the case, it's understandable.

Yes, that must be it.

When I see that leprechaun dance on the sideline, I laugh. When the fans post the words, "Play Like a Champion Today," on Facebook, it seems silly.

I don't have a sign that reads, "Write Like a Pulitzer Prize Winner Today," above my desk.

Call me ignorant if you want. I just don't understand what the pomp and circumstance of Notre Dame football is. I don't know why it's stuck in so many people's craws. Everyone gets so worked up over that football team, I guess I'm supposed to get wound up too.

Either way, I don't understand it because it's not a part of my life.

However, I know it's a part of a lot of college football fans' lives. When Notre Dame continued to win this season, it was bad news. Now, the Irish are set to play for a national championship against Nick Saban's Crimson Tide.

For those who despise the Irish, that sounds like pretty good news.

I don't know if I should believe those who tell me to hate ND because the Irish believe God is on their side.

What I do know is with Saban having a month to prepare, a remarkable offensive line and the best athletes in the nation, Notre Dame is going to need as much God as they can get.

6 Replies to “The Hate For Notre Dame”