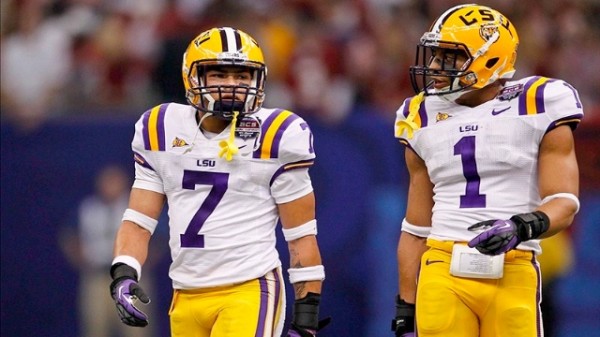 Up until they hired Nick Saban in 1999, the LSU Tigers were your normal, middle-of-the-pack SEC program. Honestly, if not for their national championship in 1958 and a handful of conference titles scattered around from the 1930s through the 1980s, we’d probably look at LSU the same way we look at Ole Miss. Coaches like Bear Bryant, Pat Dye, Steve Spurrier and Phillip Fulmer had the conference in a stranglehold in their respective tenures. Assuming LSU fans haven’t closed this article already to grab their torches and pitchforks, I’ll say that I only bring this up to show how cyclical college football is. For the most part, continuity in college football packed its bags and went the way of the Wing-T (here’s to you, Paul Johnson). The coaching carousel looks more and more like the modern dating scene every year. From my perspective, it's like you can’t watch your team win without feeling like teams are creeping up on your assistant coaches.

The Bayou Bengals’ success rests on a foundation so rich, it makes you wonder how they fell behind Alabama and Auburn to begin with. That being said, the Tiger faithful have to be proud of what they have down in Baton Rouge.

The main advantage is the Tigers’ fertile recruiting grounds. Louisiana is one of the top five states in terms of producing talent per capita. The state is small enough for a scholarship offer from the in-state school to be a huge deal, and while cases like Landon Collins (Alabama) and Trovon Reed (Auburn) pop up from time to time, pulling elite talent out of Louisiana is like winning an old-fashioned duel with a Swiss army knife. Effortless in-state recruiting also allows coach Les Miles to cherry-pick talent from states like Texas and Mississippi.

An elite coaching staff grooms the talent once they arrive on campus. Strength coach Tom Moffitt heads a department that churns out first-round draft picks like Nigeria does doctors and engineers. Whenever the Tigers lose guys to injury or to the draft, another blue-chip prospect is there to fill in the void. This year is no different.

The Good: On paper, this roster is flat-out disgusting. The Tigers only lost one offensive lineman and return 2,338 rushing yards and 30 touchdowns thanks to the four-headed attack of Michael Ford, Spencer Ware, Alfred Blue and Kenny Hilliard. A lot of fuss was made last year in regards to their passing attack (or lack thereof), but the Tigers’ ground game, defense and special teams play were enough to put them head and shoulders above the average team.

Quiet as kept, punter Brad Wing played a major role in LSU’s success. The Tigers were able to pin their opponents deep into their own territory and make them fight their way out, thanks to the Australia native, who averaged 45.7 yards per punt last year.

The Bad: At the risk of sounding cheesy as all hell, I gotta say this entire team looks to be as ornery as a Bayou gator. If you’ve seen Swamp People, you know that even though they’re arguably the most dangerous predators on Earth, alligators have but one weak spot on their bodies: a soft area on the backs of their heads. As of now, the Tigers’ passing game looks to be that spot. But even then, the weakness is only an unknown variable at this point.

People tend to point to the recent loss of human highlight reel Tyrann Mathieu, but in the grand scheme of things, a game-breaking return man/serial ball-stripper is more of a luxury than a necessity. LSU was able to play conservatively and lean on the run game when Jordan Jefferson struggled passing the ball. In their last two games against Georgia's and Alabama’s stout defenses, the Tigers only attempted 13 and 17 passes, respectively. While their running game was good enough to compensate, you have to wonder if spreading the ball around this year under offensive coordinator Steve Kragthorpe will mean more turnovers. Georgia transfer Zach Mettenberger has a cannon attached to his shoulders yet is significantly less mobile. Like most QBs with rocket arms, he may force some throws. Without Mathieu swinging the momentum with a long return, what happens when a team with a respectable defense goes up a couple scores? The Tigers lost leading receiver and deep threat Rueben Randle and will rely on Odell Beckham and former five-star recruit Russell Shepard to stretch the field.

The Ugly: Needle in a haystack here. If there’s anything I’d call ugly about this team, it’s the defensive line and secondary. Between Barkevious Mingo and Sam Montgomery manning the edges, Josh Downs, Ego Ferguson, Bennie Logan and Anthony “The Freak” Johnson anchoring the middle, it’ll be nearly impossible for any opponent to manage a solid rushing attack. The linebacker corps underachieved a bit last year, but with that D-Line in front of them, Eric Reid and Craig Loston behind them, they’ll have as large a margin for error as any unit in the country. When you factor in the infusion of talent and another year of experience, there’s no reason to believe they won’t hold up just fine. Some guys just have all the luck, huh?

The Prediction: At most, I could only see LSU dropping two games this year. South Carolina and Alabama will be tough, but the Tigers lucked out and drew both of these games in Death Valley. The trip to Texas A&M could get a little interesting, but even if it does, LSU will pull away late. The late November matchup in Fayetteville is cause for concern. As we saw in their matchup last year, the Hogs have enough playmakers to jump on an opponent early, and as talented as this LSU team is, we’ve yet to see them trail an opponent for long. In addition, we’ve yet to see Mettenberger under the bright lights yet. Are they that good, or will victory defeat them in the long run?

Too early to predict the postseason, but if I was a betting man, my money’s on LSU going 11-1.