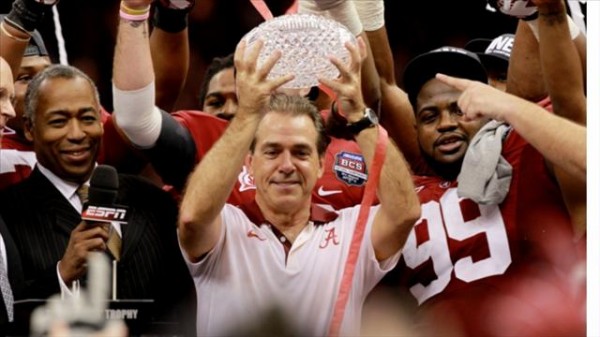 Nick Saban won his second national title at Alabama Monday night. He added it to the shelf with another championship he had won at LSU, the team he defeated to get this one.

Saban probably won’t stop here. If a poll of college football followers were taken across the globe, many would think he’d have another before it’s all said and done. Maybe just one, perhaps two more, and possibly three.

Unlike his foil at LSU, Les Miles, Saban isn’t quirky. He doesn’t fill up a quote sheet like Steve Spurrier. When it comes to human interest stories, Saban ranks down near the bottom of the list.

Saban represents an end game of wins and losses. His goal is to read the ledger, and then expand the discrepancy between the two.

He has the look of a man who doesn’t like to be bothered. He wants his team to block, hit, run and score. When they don’t, he can be an excellent example of what vocabulary a 12-year-old child shouldn’t use.

No one in their right mind would think of playing for Saban as a fun and happy experience. The man is solid as a rock and hard as stone. He wants to win, and even when the wins come, he doesn’t look satisfied.

He is the embodiment of everything a football coach is supposed to be. He rolls out the Tide like Lombardi placed the Packers. Simply put, he tells his kids what to do and they do it. They do it and they win. They win and he moves up the chain of great coaches.

The formula seems rather simple.

When Saban hoists the crystal ball, he may crack a grin for the first time since the last one. In a second, it vanishes like the opponent he defeated. It seems like no matter what his team does, it’s not good enough. He remarked something along the lines of how his team could’ve played better against LSU on Monday.

Granted, they could have, but they didn’t need to, even if they could.

Saban’s team took an LSU team, who looked like a sure-fire champ, out back behind their own house and humiliated them. Zero points? 92 yards of offense? How much better exactly?

Then, when he was done, he delivered the coach speak of how proud he was that his team overcame everything, focused on the task at hand, and won, yet they could’ve played better.

Maybe Saban will fall off and never hoist another title trophy. Don’t count on it. His demeanor makes it clear that he’s not satisfied just yet.

If he wants better performances than the one his team put on display Monday night, how will he ever be satisfied at all?

He probably won’t be, and that’s what will keep him filling up the ledger’s left side.

3 Replies to “That Sly Devil: Nick Saban Is The Best College Football Coach In America”