It's been a season of firsts for the Temple Owls football program. Philadelphia's only top-division college football team opened the season with a 27-10 victory over Penn State, its first victory over the Nittany Lions since 1941 and have rode that momentum to a 7-0 start.

That 7-0 record is a first in the history of the program, a history that dates back to 1894. The Owls are nationally ranked for the first time since 1979, sitting at No. 21 in the AP Poll and 22 in the Coaches Poll. Last week’s victory over ECU marked the first time the Owls have won as a ranked team since 1941.

All of these firsts and the great season Temple has put together have set the stage for something rare in these modern times: On Saturday, Temple will play the biggest game in the program's history. With most of today’s football programs having histories dating back over 100 years, it's quite uncommon to be able to attach such strong importance to a single game. But when Temple hosts No. 9 Notre Dame tomorrow night, that's exactly what the game will be.

The excitement in Philadelphia is palpable. Adding to the anticipation is the announcement that ESPN’s College GameDay is broadcasting from Philadelphia, another first. The fact that Temple is playing in its first ever ranked matchup, against a storied program like Notre Dame, in a nationally televised game on Halloween night should produce an absolutely electric atmosphere. The current dire state of professional sports in the city and the long-shot dreams of what Temple could accomplish with a victory in this game only adds to the intensity.

It will surely be a tall task for the Owls to pull off the upset. Temple’s defensive line gives up a lot of size to the Notre Dame offensive line, and the Owls will have to find a way to overcome that to control running back C.J. Prosise — who is averaging over seven yards a carry on the season — and get pressure on quarterback DeShone Kizer, who has stepped in nicely for the injured Malik Zaire.

Temple will look to the rock of its defense, senior linebacker Tyler Matakevich, to help support the defensive line. While undersized at 6-feet, 232 pounds, Matakevic makes up for his physical shortcomings with smarts and anticipation. He is an excellent blitzer and effective in pass coverage as well, evidenced by his four interceptions and eight passes defended so far this season. Matakevich is the unquestioned leader not only of the defense, but of the team, and will be relied upon to offset some of the advantages Notre Dame has in the trenches.

Offensively, the Owls look to a pair of juniors, quarterback P.J. Walker and running back Jahad Thomas. Walker is a bit inconsistent at times, but he protects the ball, with only three interceptions on the season. The turnover battle is one area where Temple can shift the odds in its favor, and Walker gives the Owls the chance to do so. He also throws one of the prettiest balls you will see in college football.

Thomas is a big-play spark for the Owls. He has at least one touchdown in every game this season, for a total of 12 through seven games, in addition to a 100-yard kick return TD. He is the team’s workhorse out of the backfield, only once this season receiving less than 20 carries, and is a threat catching the ball as well. Temple will look to Thomas to continue to provide big plays as he has all season, and if he can do so, it will go a long way to helping the Owls pull off the upset. 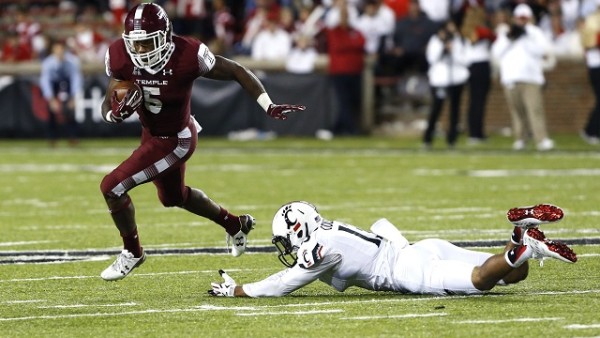 If successful this Saturday, this is a win that can keep the door open for many more firsts. It would get the Owls to 8-0, continuing the program-best start to a season with four games remaining. One of those remaining four games is against Memphis, currently ranked 16.

Further down the line there could be an AAC championship game against Houston, who is also ranked, at 18. There is a lot of football left, but the opportunity is there for Temple to do some very special things the rest of this season.

Regardless of the outcome of Saturday’s game, Temple has already accomplished some great things for its program this season. A loss on Saturday, while disappointing, wouldn’t diminish what the Owls have done so far, nor would it completely derail what they can accomplish the rest of the season. A win would be monumental and have people in the Cherry and White dreaming of once unimaginable heights, looking for some help from the teams ahead of them and starting to entertain thoughts of the “P” word come season's end. Even if that highly unlikely scenario never came to be, the Owls could still be looking at a top 10 finish and a very respectable bowl game.

Win or lose, the Owls have given their university and their city the gift of this game. They have brought national attention and the fun that is a huge game under the lights on Halloween night. Temple is giving all of us the rare opportunity to witness the biggest game in a program’s history, and that in itself is a testament to what this team has accomplished this season.

Most importantly, the Owls have given themselves an opportunity to accomplish something truly special, and that’s all any of us can really ask for.