The kicker puts his hand up to ready his kick coverage team. He runs to the football and puts boot through it. Cameras flash. Fans cheer. Super Bowl 50 is underway.

The best part about this moment is that all of the talk leading up to it doesn’t matter. The two weeks of mostly pointless chatter between the championship games and the Super Bowl are completely wiped away.

As the game draws ever so near, the questions irrelevant to the game stop, and the focus shifts to the contest itself. How will Denver’s defense stop Newton? How will Manning look against this incredibly fast, stingy defense? The list of questions can continue forever.

While I may not have the answers to those questions, I do have them condensed a little bit into a summary of the best and worst case scenarios for each squad going in to Super Bowl 50.

Bear in mind that these are realistic scenarios. Best case scenario for Denver is that Peyton Manning wakes up and feels like his 30 year old self again and slings the ball all over Levi’s Stadium. But the chances of that happening are about as likely as Ted Ginn Jr. being the top receiver on a Super Bo-…. Never mind. Bad example. But you get the point.

The team comes out flying around like they did in their first two playoff games and jump out to a fast start. Scoring on the vaunted Denver defense won’t be easy, so the Panthers will benefit from a long scoring drive to open the game. This not only gets points on the board, but a drawn out, grinding scoring drive would give them confidence that they can move the football against one of the league’s best defenses. Another key with this is it demoralizes the Broncos defensive unit that turned Tom Brady into a tackling dummy just two weeks ago.

A long drive would mean Jonathan Stewart rolling early. Let Newton settle in to the brightest stage he’s ever been on. The Panthers will come out with some easy passes to get their superstar quarterback into a rhythm that he can later parlay into big third down conversions. Another benefit to this is it keeps Von Miller and DeMarcus Ware honest. Carolina isn’t going to want to let Newton sit back with long-developing routs to let Denver’s edge rushers tee off. So an elongated scoring drive gets them out in front and forces the Broncos defensive unit to sit back on their heels which will help make them look a little more mortal than they did against the Patriots.

From there it’s up to Carolina’s defense to keep doing what they’ve been doing. Roman Harper said this week that “thievery travels,” and that’ll be key for Carolina. If they can get a quick turnover after a long scoring drive, it’s off to the races for the Newton-led offense. They won’t put up a ton of points on Denver, but the earlier they put them up against an already struggling Broncos offense, the better. With a quick, early lead, Carolina is good enough that they just have to not give up any huge plays on defense and avoid turnovers on offense. They’ve been adept at both of those things this season, and in this case, it would allow them to keep pounding their way to their first ever Lombardi Trophy.

For the first time in his life, a stage is too bright for Cam Newton. The quarterback who has thrown 24 touchdowns against just two interceptions since Week 10, regresses early on as he tries to elevate his game in front of a worldwide audience. This puts Carolina in an early hole as Denver’s swarming defense gets to Newton on his first couple of drop backs and the usually sound decision-maker forces some bad throws. Carolina’s offense becomes disjointed and Newton takes it upon himself to try and win the game.

Normally Newton winning a game on his own isn’t out of the realm of possibilities, but in the Super Bowl against an elite defense, it leads to turnovers and short fields for the defense. Carolina’s stout defensive unit might hold up for awhile, but after being on the field too often they allow the Denver running game to break through and it opens up the short passing game for Manning who goes to work dissecting an exhausted Carolina defense.

The biggest problem with this scenario for Carolina is that it will drag out beyond the first half and by the time they’re able to catch themselves and gain their footing, they’ll be running out of time. Perhaps they have a couple miraculous plays up their sleeves to mount some sort of comeback, but the early mistakes were just too much to overcome, and the Broncos are Super Bowl champs for the first time 1998.

The defense picks up right where it left off against the Patriots and stifles the NFL’s top scoring offense. Chris Harris and Aqib Talib render the Carolina receiving corps as ineffective as it looks on paper, and they turn the dynamic Panther attack into a one-dimensional ground game that forces Newton to take more punishment as he moves outside of the pocket and tries making plays down field with his legs.

Denver’s offense is not what it was a couple years ago, but ‘The Sheriff’ isn’t going to let his last ride be a microcosm of the narrative that has defined his career. At this point, Manning realistically isn’t going to turn back the clock, but he makes good decisions and orchestrates enough offense through screens and short passes that it preoccupies the Carolina defense enough to open up the running game. A couple of long runs by C.J. Anderson let Manning go to work out off of play action. The play action forces Carolina to remain honest and gives Emmanuel Sanders and Demaryius Thomas enough space that Manning’s wounded ducks find their way into their hands.

Carolina will put up some points, but Denver’s defense holds long enough that a couple of touchdown drives and a couple of field goal drives puts the game out of reach by the time Carolina is able to crack the Broncos defense. As has been the case all season, the Denver defense ultimately wins them the game, but Manning is able to ride off into the Santa Clara sunset with his second Super Bowl ring.

Worst Case Scenario: Manning Rides Off… To The Bench

The Panthers’ defense renders Manning and the Top Ramen attached to his right shoulder entirely ineffective. Anderson and Ronnie Hillman can’t get going against a stout Carolina front, and Manning’s ducks land everywhere but their intended targets. The pressure starts mounting as the “Manning can’t win the big one” narrative begins to rear its ugly head before the game hits its first commercial break.

As the Broncos first few drives end in three-and-outs, Carolina capitalizes. Denver’s defense, as good as they are, can’t stop the dabbing buzz saw that is Cam Newton. Newton’s effectiveness in and out of the pocket has the Denver defensive front spinning in circles. As Newton extends plays in the near impossible way he’s prone to do, the Broncos’ defensive backfield isn’t able to contain Ted Ginn and Greg Olsen, and Carolina breaks off a couple of huge plays.

Arguably the worst part of this for Denver is that Carolina goes into halftime with something like a 24-0 lead. The Manning-led offense has been unable to move the football effectively, and the Denver coaching staff is forced to insert Brock Osweiler under center in what is likely Manning’s last game. Osweiler proves incapable of mounting a comeback as well, the Panthers are World Champions and Manning’s retirement is headlined by another dreadful Super Bowl performance. 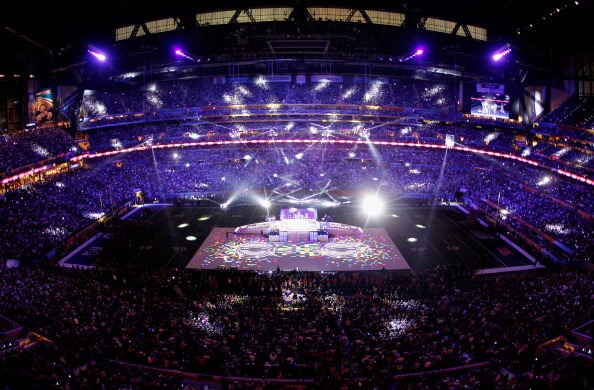