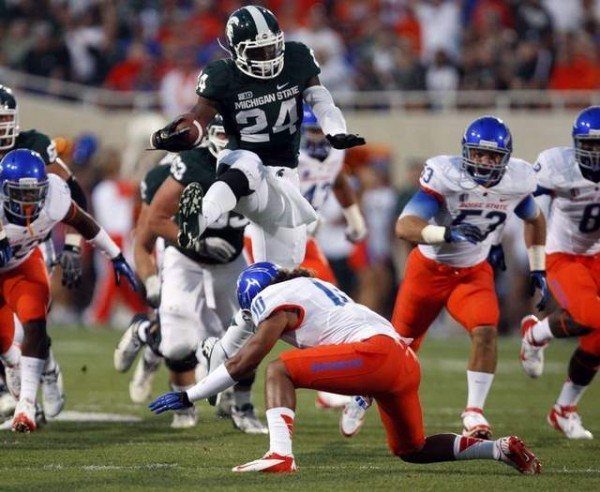 You just wasted nearly 12 hours of your life on Saturday, sitting in front of your television, consuming inordinate amounts of food and yelling at people you've never met in your life. You've decided to congregate with a group of your best buddies, or you've decided to sit in your house by yourself. You only return phone calls when necessary; yet, you text/facebook/tweet when something crazy happens.

Yep, this has all the symptoms of college football being back in your life. Enjoy Sunday School, just in case you missed anything on your glorious Saturday filled with football glory.

Both of these teams and their senior QBs got the best of my Dawgs last year, so watching their first game under new field generals was a bit of a treat for a vindictive guy like myself. Both teams struggled to get much going through the air: Boise’s Joe Southwick hovered around a 50% completion rate and threw a crucial pick in the redzone. To be fair, Sparty’s defense held the Broncos to a pathetic 37 rushing yards, eliminating any hope for offensive balance. On the other hand, Andrew Maxwell almost threw the Spartans out of contention with three picks. For the most part, this game was a comedy of errors, aside from Le’Veon Bell’s effort. The kid racked up 210 yards at a 5 yard-per-carry clip on, get this, FOURTY-FOUR CARRIES. He also added two touchdowns and 55 receiving yards. Lattimore might have a little competition for the Doak Walker award.


Clemson fends off impending ACC irrelevancy for One Shining Moment

Midway through the second quarter, I was gonna lead this recap with “Auburn’s defense surprisingly competent in Chick-Fil-A Kick-Off vs. Clemson.” From the looks of it, new defensive coordinator Brian Van Gorder has Auburn looking more active on defense, but the stat sheet would say otherwise. Both teams seemed committed to the ‘bend-but-don’t-break’ ideal, each allowing around 5 yards-per-rush. Tajh Boyd made clutch play after clutch play, accounting for six third down conversions. His partners in crime, Andre Ellington (228 rushing yards) and DeAndre Hopkins (13 rec. 119 yards, TD) showed up as well. I hate to be the one beating this drum, but Boyd, Ellington, Hopkins, not to mention Sammy Watkins coming off suspension, is nothing to sneeze at. After clearing this hurdle, the Tigers can look forward to the Sept. 22 trip to Doak Campbell, in what looks to be the de facto ACC Atlantic Division championship. 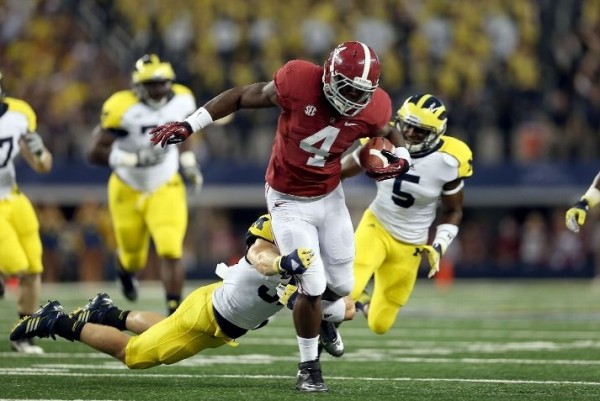 Alabama Rolls Michigan: They are who we thought they were!

The stage was set. The marquee matchup in the Jerry Dome. Brent Musburger on hand. ESPN spent the entire summer giving us reasons why this game had the potential to be different from what we’ve seen in the past. The SEC’s congregation spread the good word to their neighbors all summer, promising Michigan they’d be baptized in the same lake of fire Virginia Tech, Clemson, and countless others had been dunked in before. Tonight, Brady Hoke and the Wolverines were the latest to have the scales removed from their eyes. To be fair, a mobile quarterback like Denard Robinson can cause problems for the most formidable defenses, but only when other threats lie at his disposal. The Wolverines tried to attack through the air early on in order to set up the run, but by the end of the first quarter, the Tide had built up a 21-0 lead on the backs of freshman TJ Yeldon, who broke the 100-yard mark in his debut. By then, Saban was free to send as many blitzers as he liked, forcing three interceptions and holding the Maize and Blue to a 3-12 third down conversion rate in a 41-14 rout.

September 1st couldn’t come soon enough for Georgia fans. If our beloved Dawgs had any more time to shoot themselves in the foot, they’d need a prosthetic to actually kick off. The Bulldog nation already had a sour taste in its mouth from the offseason dismissal of Isaiah Crowell. Suspensions of starters Sanders Commings, Baccari Rambo, Alec Ogletree and last-minute injury of Malcolm Mitchell were bad enough. Going into the season opener, the fanbase desperately needed cause for optimism. A heavy dose of Kool-Aid was served by true freshman Todd Gurley, who also grinded out 100 yards and three scores, one on a 100-yard kickoff return, and another on a 55-yarder that exhibited his power and track speed. The Bulldogs will limp into Columbia, MO next Saturday to face Missouri in their inaugural SEC matchup.

The Duke shines in debut

Keeping with the Youth in Revolt theme, Miami true freshman Randy “Duke” Johnson burst onto the scene Saturday at Boston College, with 135 yards and two touchdowns on only seven carries. The two scores came from 54 and 56 yards out respectively, and both would put the Hurricanes ahead late in what could’ve been a crippling early season letdown for Al Golden and the U.