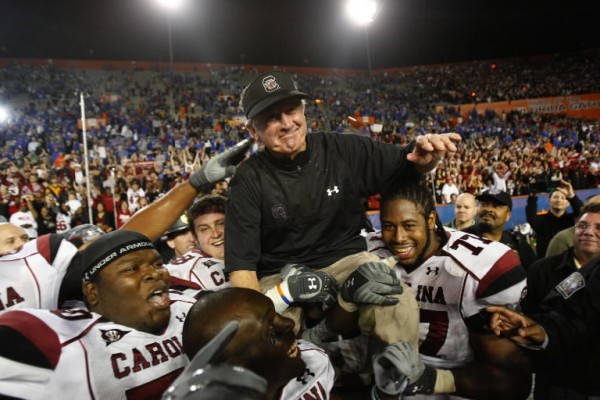 Spurrier's Gamecocks blew them out of Columbia, 35-7. The team in garnet and black played ferocious defense. Star running back Marcus Lattimore ran punishingly. Quarterback Connor Shaw rarely threw it. When Shaw did put it in the air, he was successful.

It was a big game. The Ol' Head Ball Coach had the first, second and last laugh.

South Carolina's win moved the Gamecocks to 6-0 and a number three ranking in both polls. Spurrier came to a program marred with mediocrity.

He changed his offensive approach. The fun-n-gun hit the road for the time being. Now, Lattimore pounds and the defense stands tall.

After his failed attempt at an NFL career, the former Heisman winner is comfortable again in the college game.

That's great for everyone.

Take a good, long look around the sphere of one of the country's biggest games. It's no secret how big college football has become. No, that remains clear. It appears more clear each Saturday.

Although the on-field product is as good as its ever been, the personality isn't.

(Al Golden wears a tie. But, his image seems drummed up. Plus, he sweats too much.)

In the major football conferences, two personalities stand out. Mike Leach is pirating at Washington State, but his Cougars are awful.

The Ball Coach is what's left.

There are people who loathe the Ball Coach. Many are in SEC country. Others are in Tallahassee. More are Redskins fans.

It's justified. The man has run up scores, spoken poorly of opponents and thrown his visor on many a sideline.

But the game needs a character. Furthermore, they need the character to succeed. Spurrier needs to be relevant to restore the order of a universe stuck in coach speak and cold coaches.

Nick Saban seems like he'd be unhappy if he found a puppy. He's less than magical with words.

Les Miles' 'mad hatter' personality was born out of ridiculous play calls and a human being who eats grass. His press conferences leave much to the imagination.

Urban Meyer is calculated with his words. The end game is to win, and win big. It's what Meyer does, but that doesn't mean it's entertaining.

These people are polluting the fun. They're erasing the pull quote and replacing it with recruiting rankings. That's not the college football we grew up with.

We grew up with a college football where a program had an identity.

That identity was the fatigues Miami wore off the plane at the Fiesta Bowl. It was embedded in the, 'win big and stand in the sun,' culture Pete Carroll created where Snoop Dogg stood on the Coliseum sidelines.

You knew Penn State would wear black shoes and accentuate the team aspect of football with bruising linebackers. Florida State had some flash, some dash, and a homespun guy on the sideline who muttered, 'aw, shucks.'

We saw Tom Osbourn look like a steely old grandfather on the sidelines. There he stood with no remorse as Tommie Frazier ran the same play down your favorite team's throat.

Spurrier is one of the last great icons in college football. He still wears his visor. He still talks with the same twang. He still weaves a full quote sheet with jabs at opponents and rivals.

When he does, everyone rolls their eyes and says, 'Well, that's just Spurrier.'

In an atmosphere where answers on execution and talking up an opponent exist, it's good to know the Ball Coach is around. Someone out there still has the charisma to speak candidly.

Rather than worrying about how an employer or opponent will handle a controversial quote, the Ball Coach tells it how he sees it. Whether you think it's honesty, strategy or a PR ploy, it's original.

At least the Ball Coach has a personality. Spurrier kept his identity. It's nice to know we can rely on his wit.

Thank goodness he reminds of us of what once was.