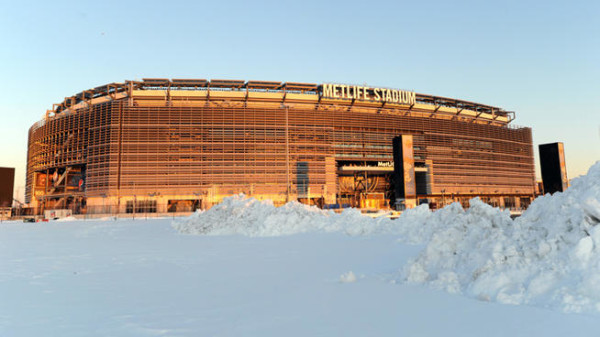 We’re getting closer and closer to Super Bowl XLVIII (48) in New Jersey, and we’ve heard much about two of the biggest “controversies” about a game yet to be played. For starters, the weather seems to matter quite a bit as it’ll be early February, cold, in an open-air stadium that’s even more exposed because of a unique façade and it’s the northeast. The other has to do with a fan’s most prized tradition as officials reported that there will not be tailgaiting outside of MetLife Stadium.

ERMAHGERD, IT’S GOING TO BE THE WORST SUPER BOWL EVERRRRRRR!

ERMAHGERD, IT’S GOING TO BE THE BEST SUPER BOWL EVERRRRRRRR!

Please don’t take this the wrong way, friends, but there’s a very strong chance that you and I will watch the title game from the same vantage point as the Giants and Jets. We’ll be watching from our couches. I say this because I wonder why people get so upset about this.

While no one wants the elements to be the cause of some serious harm to players or fans, the sheer hypocrisy from people crying about the potential weather is too much to ignore.

Let’s take it back to 2008 in Green Bay when The Coughlin Face was made famous by a missed field goal by Lawrence Tynes and some of the worst conditions for an NFC Championship Game since the infamous Ice Bowl 41 years prior. Or we can revisit the 1981 AFC Championship Game where the host Cincinnati Bengals beat the San Diego Chargers as the Queen City was under a deep freeze with actual temperatures of -9 degrees Fahrenheit and wind chills close to below 30.

NFL.com highlights a few of the worst weather playoff games in league history. There was frozen AstroTurf in 1975. Monsoon rains in ’79. An actual fog in ’88. Snowplows use in Foxborough, twice!

Has anyone ever called for caution when it came to those contests? Probably not. In fact, those very games are part of the lore of the NFL; no matter the conditions, those men and the fans in the stadiums braved adverse weather for a chance at greater glory. The stakes are just as high to make the Super Bowl as it is to play in it, yet few people ever consider that Mother Nature doesn’t always go by an ideal calendar.

As for tailgating, the main reason that this shouldn’t be a controversy is that like getting a Golden Ticket in a Wonka Chocolate Bar, actual Super Bowl tickets are just as hard to come by. No one other than actual ticket holders will make it near MetLife on Super Sunday. Many, if not most, of said ticket holders are not going to be the typical NFL fan, but league partners and very select season ticket holders from every team.

The corporate takeover at the Super Bowl itself means that the parking lots won’t be crammed with RVs, spontaneous games of cornhole, portable grills and coolers of your favorite adult beverages. As discussed earlier this year, the NFL is a different animal come Super Bowl time. Since you and I won’t be there, is this really that big of a deal? Not at all.

Sorry to rain on your parade. To make up for it, get your link on.

Super Bowl Forecast: Snow During Game Could Be Boon for Advertisers, Ratings – Advertising Age (I think the first overtime in SB history would have a bigger impact than a few flurries)

With a Little Tinkering and a Better Attitude, Adrien Broner May Yet Become a True Star – Yahoo! Sports

Fork in the Road – Sports on Earth (The Rotation)

11 Of America's Most Scenic And Significant Basketball Hoops - Deadspin

Which NBA Coaches Are Best At Designing Plays During Timeouts? - Regressing

3 Replies to “Starting Lineups: Weather & No Tailgating Super Bowl Is Much Ado About Nothing”