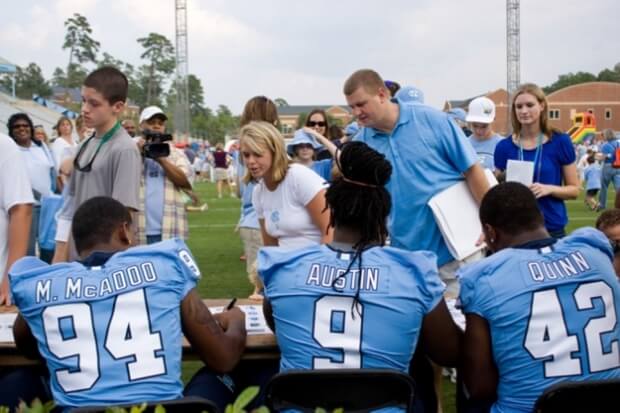 The NCAA has a ton of responsibility and protecting the integrity of the game is one of the things that they must consider. Chances are that if you are a college athlete, you are going to encounter a professional athlete at some point during your college career. If that is the case, then there is an even better chance that when those guys come back, they are going to want to hang out with the people that stood by them when they didn’t have anything and help them enjoy it. Why wouldn’t you want to take a trip or go out with a person that you shared a room with for two-to-three years in college?

Looking at the big picture, I can see why you cannot have NFL players paying for trips. Hindsight is 20/20.  But imagine for a moment that you are a 22-year-old college student from Back Woods, NC, who has just struck it rich.  You are in California and are on the phone with two of your closest friends; almost like brothers, because you are so close.

During some casual conversation, you describe the workout facility that helped get you the big payday, and your friends say, "Wow, I wish I could see it."  You're rich, you've got money to burn, and your friends are all across the country.  "Come out, stay with me, and I'll show you around." Of course they reply, "Man, we don't have that kind of money."  You say, "Well I do.  Come out and I'll pay.  I got millions. I remember when I didn’t have a dime and you bought me Taco Bell everyday. It’s the least I can do for you."

Why not?  It has nothing to do about agents, recruiting, or anything about athletics. It’s just a case of friends being friends; kids being kids.  Do you think it’s possible?  How about probable?

This happens all across the country and even though there are kids who have been educated on the wrongful effects of the rule, it happens anyway. This is unfortunate and results in the remaining players on the team carrying the burden even though they are guilty of no wrongdoing.

It's not that the players had bad intentions; the problem is that they broke rules that were crystal-clear.  This is not on the agents and it is not on the NCAA.  This one is on the players.

The problem I have with these rulings is where the NCAA should draw the line.  In my honest opinion, no one has the right to legislate friendship, not even the NCAA.  Can the NCAA tell someone whom they may date or marry? What if a female agent met an athlete, they fell in love, and the agent paid for the wedding and the honeymoon. Is that a violation?  No governing body can prohibit something done strictly out of love or friendship, regardless of the occupation of the friend.  That is why this is so tricky.

The NCAA tries to distinguish between friendship between individuals and friendship that arises and is primarily in conjunction with the fact that one of the people is an athlete.  One is personal, and the other is more professional, but there is plenty of grey area.  Being aware of the rules, accepting a trip may be less than savvy, and I doubt anyone else in the college football family will be this naive again.

In the NCAA rulebook, there is a by-law that is nicknamed the "Preferential Treatment By-law."  The rule states that the act of giving gifts is considered preferential treatment if the relationship of the two parties did not exist prior to college football being a factor. These players all know each other, because they played college football together.  Coaches constantly drill these kinds of things into the players' heads that accepting these kinds of things are an NCAA violation.

So I guess a rule is a rule, but it doesn’t make the rule right all the time.

8 Replies to “Sometimes, Rules Make No Sense At All...Ease Up, NCAA”