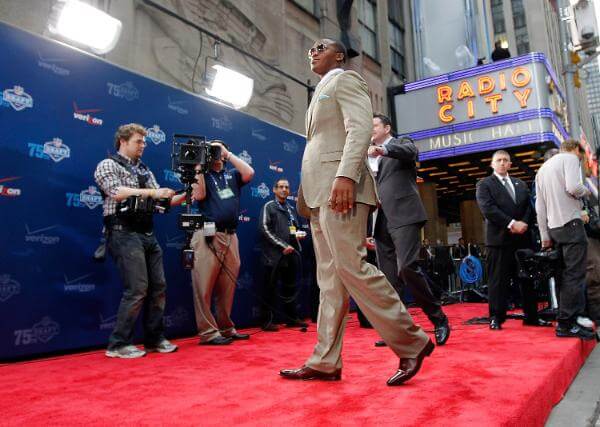 It may be overhyped for even the most obsessed sports fans, but there’s no doubt that the NFL Draft is one of the most anticipated events on the sporting calendar.  Whether critics of its ESPN-addled coverage care to recognize it or not, the allure of the draft is that fans want to be able to tell someone “I remember when (future Hall of Famer) was drafted.”

Add the mix of fraught franchises trying to find a new savior before the selection clock strikes 00:00, the Draft blends the thrill of (apparent) victory and the agony of defeat without the helmets and pads.

Yet, maybe it’s still feeling the fatigue of covering the infamously long first day of the 2007 Draft (it was THAT long), but there’s one part of the Draft that seems to be a bit…stale.

It might be time to rotate host cities for the NFL Draft.

Those words will make fellow New York City natives spit out their coffee, but the league is about more than one market.

One of the few advantages that the NHL holds over many of their league peers is that their draft travels around the league, year-after-year. Regardless of how it plays out on television – not well compared to the NFL and NBA – it’s a great way for enthusiastic fans to connect to the future. While it helps that many first round players come to the Draft, the league hosts several events (many being free) that let fans interact with the game through clinics, seminars, autograph sessions, and much more.

So why not the league that dominates our psyche (even in the days where not one pass is being thrown) do something similar?

For all major sports leagues, the only chance for fans of nearly all economic backgrounds comes for their All-Star games. Even if the game itself is sold out, there are plenty of events around the game that bring out fans that would be unable to attend games otherwise. Yet, in lieu of the fact that the NFL doesn’t have a real All-Star Weekend – Pro Bowl critiques are unnecessary – there isn’t much of an opportunity for Joe/Jane/Juan/Jaquon Fan to connect to the game in person. With the Super Bowl being sports’ most corporate-saturated event, and regular season games being hard to come by in many markets, it might come as a surprise that the most popular entertainment company league in the U.S. has an issue with fan accessibility.

[Yes, all major pro leagues do, but it’s even more pronounced in the NFL.]

The Draft could provide take a page from the NHL, and then some, with the nationally-televised event being surrounded by relevant events that reflect the football passions of the local community.

Part of the reason why the NFL is so revered is that while larger metropolitan areas such as Chicago, Dallas, and New York/New Jersey are home to historic franchises, it is actually Green Bay and Pittsburgh that are home to its most popular teams. This market diversity is what makes the league unique, even as the league continues to clamor for a return to the twice-failed Los Angeles.

So why not let the Draft become its All-Star Weekend, so to speak, by alternating host cities as it does for the Super Bowl?

Imagine if the Draft was hosted in Detroit, where the faithful of the Lions can show out – maybe at the expense of NFC North rivals – and the region can once again tell its story of slow, but steady resurgence?

Or how about Kansas City; where their newest offensive tackle can sample some local barbeque right after he finishes his interview with the NFL Network?

Maybe to further boost its profile, Jerry Jones can host the largest draft party of all time at Cowboys Stadium.

Or better yet, Oakland. Just envision The Black Hole with all of its colorful characters screaming and praying for anything but the next JaMarcus Russell. It would hearken back to the days when the New York Jets fans gave us comedy with each year’s top pick.

There’s no doubt that there’s an allure of select draft picks coming to New York City with the chance to not only shake the hand of Roger Goodell, but to see midtown in its full, daily chaotic glory. Potential endorsers swarm around with promises of more millions, so long as these new future stars meet, or exceed, expectations. The media attention during this time is just a taste of what they will witness on Sundays. It’s exciting, it’s intense, and it’s an experience many have dreamt about since they were kids.

Yet, as Super Bowl XLVI in Indianapolis showed us just three months ago, the NFL and its fans could benefit greatly from letting another city have the chance to host a signature event.

6 Replies to “Something for the People: A Case to Move the NFL Draft”