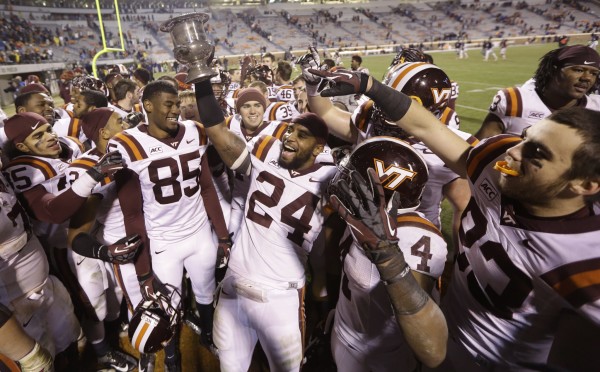 When you attend a big state school, you’re obligated to support the football team. It’s not an option. If you want to be a "part of," you simply sling on a Nike T-shirt and go to class. Some piece of school-colored garb belongs on your body.

There is something to dislike about the arrangement. Everyone you go to class with — even the nitwits — support the same team. They think they know what they’re talking about when discussing running back options or play calls. Many don’t. As an aged sports fan, you learn to shut off your ears.

What makes the experience worthwhile is the connection made between friends and other alumni. Last Friday, a close friend made the drive to my home in Virginia. My best friend — another Hokie — met us from his family home just miles away. At night, we hit the road.

We rode to Charlottesville, home to all those Hoos with Cavalier attitudes. We rode willingly for the only reason we would desire a trip to UVa. — The Commonwealth Cup game. Virginia Tech owned nine in a row. One more would secure a “decade of dominance,” as some tab it.

Beating UVa. 10 times in a row in football isn’t something that seems overly difficult. At this point in time, it seems like a birthright. Since a loss in 1998 — which I attended — UVa. has only beaten Tech once. Unfortunately, my seat was in the stands that day as well. Still, you play to beat your rivals for the satisfaction of some unseen entity that proves you’re better than those uppity rascals.

We arrived, checked in to our hotel and went to a couple bars in Charlottesville. One joint offered a late-night menu with pimento cheese fries. They were pretty good, but you can’t sniff pimento cheese anywhere within 100 miles of Blacksburg. It wasn’t home, but it was good enough.

After a late-night chat with my best friend, I struggled to get out of bed on Saturday. We went to a tailgate and scalped some tickets for cheap. Upon our entrance to Scott Stadium, we discovered Duke beat North Carolina, clinching the Coastal Division title.

No matter, we said. The goal was to beat UVa. Deep down, we figured Tech would lose if anything was on the line anyway. We stood on the hill in the south end zone. Some fellows we knew in Blacksburg showed up. It was just like college again. 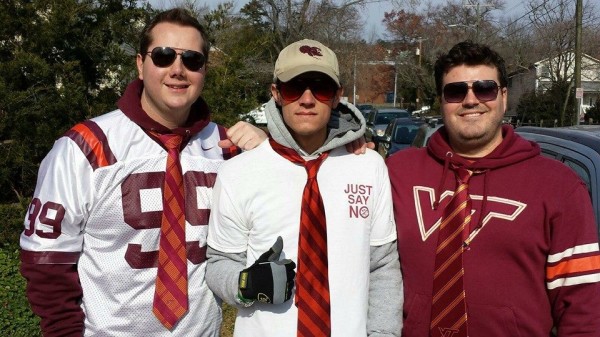 We joked and laughed and made fun of the other team and made fun of our own. No one was blackout drunk, and no one was unruly. We simply enjoyed ourselves as Tech ran the streak to 10 straight, 16-6.

The satisfaction was there, and the Hoos provided it as only they can — without worry. Looking around that stadium, it was clear there were as many Hokies fans, if not more, than the home team. Another conquest complete, we headed to our car. There, we sat in traffic as updates trickled in of the final moments in Auburn’s win.

It didn’t matter that we missed the game of the century. Instead, we spent a day on our rival school’s campus, ripping and roaring and soaking in complete and utter ownership. On the ride home, my friend from up north and I spent the time recapping the latest developments with friends, life and relationships.

The conversation continued deep into the night, much like the night before. It truly meant the world to spend some time with dear friends. We all have these friends. They're friends who don’t leave your side, friends who give you advice based on your personality and trust.

Once Sunday came, one friend was back home in Richmond. The other rode back to Pennsylvania. My mind and heart refused to ignore the gravity of the trip.

We had come together one more time as students. Our big-school team united us once again, and this time there was no need to stop listening. Instead, we talked, empathized and laughed. Beating UVa. signals just another year for the Hokies and their fans.

This year, however, proved different. The escape into enemy territory gave me an appreciation and understanding. Those endless classes, lunches and bus rides next to sports-illiterate morons were all worth it. Attending Tech solidified friendships I already had and created new ones.

The game's didn’t matter nearly as much as the result of a weekend based around connecting with the guys. My problems in life still existed, but they were so far away. Nothing could disrupt the bonding, football and rivalry.

As Saturday night dwindled away, the familiarity of a November win over UVa. wasn’t lost on me. The familiarity of a night watching the Tech game with my friends wasn’t, either. There will be plenty of Commonwealth Cups in the future.

Perhaps none will be as great as Saturday’s.