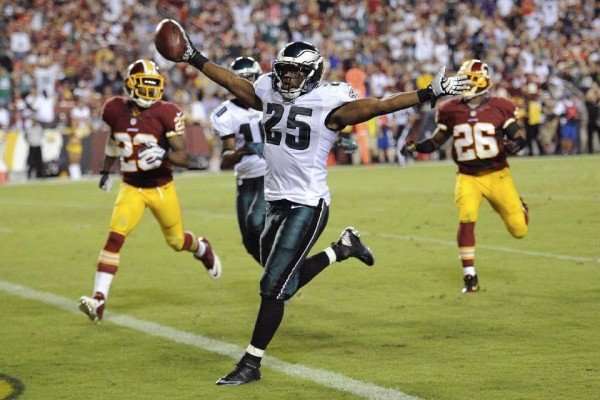 Last night, Week 1 concluded with a Monday Night Football doubleheader with the Philadelphia Eagles taking on the Washington Redskins and  the Houston Texans in San Diego against the Chargers and Ed’s all-time favorite fantasy player.

One can argue which team is the recipient of the grandest of hysterical responses, but after last night, there’s no doubt in this Scribe’s mind that the Eagles are that team. In the first half, the way Mike Tirico and Jon Gruden talked up the new-look offense, you would have thought head coach Chip Kelly paid for airtime like he was running in an election primary. Then again, so where most of us on social media. The Eagles ran 53 offensive plays, LeSean McCoy broke the century mark on the ground, DeSean Jackson left DeAngelo Hall back in 2004 Virginia Tech for a score and Michael Vick looked more like Robert Griffin III than Robert Griffin III did.

Then, the second half happened.

A major reason why there are so many “slow your roll” reactions a day after a game in Week 1 is because this is #SeptemberFootball (you’ll see that hashtag all month, so roll with it). Super sloppy play making some teams look better or worse than they may actually be as the season wears along. The biggest culprit may be that conditioning is still an issue for most starters as they warm up to playing at full intensity from the first to last snap. That must have been the case because the Eagles’ defense looked winded, letting RGIII and the Washington Redskins ease back into the game. Now, Philly didn’t look as exhausted as the Baltimore Ravens did up in the mile high heavens of Denver, but with the offense stalling out, this issue was more magnified.

Though they were very impressive on offense for two+ quarters, let’s see if the breathless sonnets are still sung in a few weeks. Book this: by mid-October, if the Eagles aren’t above .500, most national columnists and Skip Bayless will scream that the offense needs to slow down to help the defense out. While there may be some truth to it, there will also be some deeper analytic longform articles to counter those arguments. And guess what? More overreactions of the overreactions.

Don’t say I didn’t warn you.

Now, your Tuesday morning words from the interwebs.

Have Sports Teams Brought Down America’s Schools? – The New Yorker

Live from Tokyo? NBC Faces a Time Shift for the 2020 Olympics – Bloomberg Businessweek

Twitter Killed All of These Second Screen Apps – Adweek

2 Replies to “Starting Lineups: #SeptemberFootball – Where Every Team Looks AMAZINGLY Good or Bad”