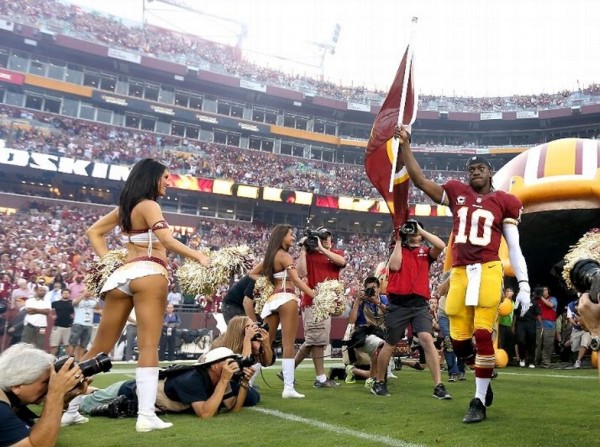 For all the press conferences that took places this offseason.

For all the the debates over when and if Robert Griffin III would be ready to take the field.

For all the documentaries, all-access pieces and columns written about the now infamous knee injury.

For all the high expectations placed upon the franchise heading into Week 1.

For all of the above and more, the Washington Redskins were reminded that you still have to line up and play the game.

That lesson was delivered hard and seemingly in the blink of an eye by Chip Kelly, Michael Vick and the new-look Eagles in a 33-27 win over the Redskins on Monday night.

The Redskins were no strangers to offseason attention. For years, Dan Snyder would make a ridiculous splash in free agency that would have fans excited only to be disappointed by Week 8. However, this year was different. Coming off an NFC East championship and with a franchise QB in place, the hype was warranted, realistic, but also brand-new.

"Had a serious case of the can't-get-rights. Penalties, hurting ourselves. I don't throw picks, Alfred doesn't fumble, and Kai doesn't miss field goals. All three of those happened tonight. So we'll get better, no doubt." -- Robert Griffin III

But aside from Xs and Os, a winning attitude needs to remain consistent for this team to truly take the next step. And if you're going to draw, purposely or not, constant media attention to yourself, you had better be ready to back it up and deliver once you take the field. Once the Redskins got hit with the early punch, all the offseason press clippings suddenly became a distant memory, and they struggled to get back up.

For as much as last season was a dream, the reality is it was an anomaly in D.C. Playoff runs in 2005 and 2007 notwithstanding, the Redskins hadn't been consistent contenders since the glory days of the '90s. The arrival of Mike Shanahan and Bruce Allen, and now with RG3 and Alfred Morris, signaled what is expected to be a new era for the Redskins. Coming into this season, mediocrity was to no longer be tolerated. There was an expectation to go out there and win. Losing to the Eagles wasn't supposed to happen on paper, but it did. And that should serve as a reminder to everyone from RG3 to Joe Fan in the 400 level that nothing will be given to this franchise.

If you want to point to a silver lining, the fact that RG3 refused to make any excuses and found somewhat of a rhythm in the second half should bode well for the team moving forward. But he isn't surprising anyone this year. Week in and week out, there will be a target on his back and opposing teams will center their game plans around stopping him.

Be careful what you wish for. For years, Redskins fans wanted that star QB and for their team to be hunted and not the hunter. We got it now, and we have to deal with it — good and the bad.

8 Replies to “Operation Patience: Robert Griffin III Struggles In The Return Of The DC Messiah”