Stanford head coach David Shaw can’t prepare for Saturday’s game against Notre Dame without someone asking him a question that involves the words “top-tier.”

The Cardinal’s recent clashes with the Fighting Irish have been enough to propel the game into a national spotlight, particularly this year with all the playoff implications surrounding the outcome. But Shaw doesn’t care about rankings, projections or other things beyond his control. And he’s certainly not dwelling on phantom whistles or Stepfan Taylor touchdowns that weren’t.

So his answers vary; sometimes he responds thoughtfully, expressing hope that people pay attention to this exciting rivalry. Other times, he uses comedy to side-step the query. And sometimes he is just downright sassy.

Shaw isn’t worried about who is or isn’t paying attention to his team or where the opinion of them falls on a national scale. Instead, he is focused on the opponent standing between his squad and this Saturday’s “W.”

The team standing in his way this week is fourth-ranked Notre Dame.

The Irish head to the Farm with high hopes - finishing the year 11-1 and moving up two spots in the College Football Playoff rankings. Visions of a playoff spot are dancing in Notre Dame coach Brian Kelly’s head, but Shaw’s efficient offense provides the perfect foil for Notre Dame’s physical defense.

The Cardinal lead the Pac-12 in several statistical categories including third-down conversion percentage (.497), fourth-down conversion percentage (.909), kickoff returns (25.50), tackles for loss allowed (4.45) and time of possession (35:18). In 10 of its past 13 games, Stanford has held the ball for nine or more minutes than its opponents, and the Cardinal leads the country since 2010 in time of possession per game at 33:07. Keeping the ball out of the hands of Notre Dame’s offense will be key, but capitalizing on possessions against a team that boasts a 28th ranked scoring defense, only allowing 21 points per game on average, will be everything.

“When they need to score, they score. When they need to stop the offense on defense, they stop them,” said Shaw in a presser on Tuesday. “And that’s what this defense has been able to do – get their own turnovers, stop people in the red zone, make them kick field goals, get three and outs and force punts, create negative field position plays by sacking the quarterback or getting a TFL (tackle-for-loss).”

When asked if there is anyone on Notre Dame’s defense that Shaw particularly “likes,” the 5th year Stanford head coach responded with his famous dry wit. 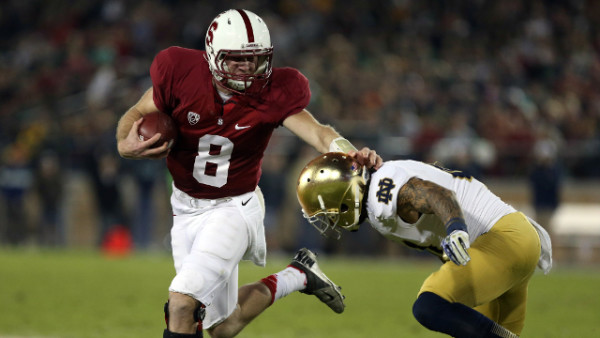 “I wouldn’t use the word 'like',” Shaw said with a grin. “I would like for some of them not to play.”

On a more serious note, Shaw credits the recruiting at Notre Dame for the team’s physicality up front, singling out senior defensive lineman Sheldon Day and junior linebacker Jaylon Smith. Day leads the Irish with 14.5 tackles for a loss, while Smith leads the team with 98 total tackles on the year. Oh, and Shaw mentioned one other guy.

“Joe Schmidt just runs the show back there – physical, smart, great position, makes plays in the backfield, makes plays in the pass game,” said Shaw of the graduate student linebacker. “(They are) all very well coached, all very physical and aggressive and to be honest, they got after us last year…our job this week is to play better than we did last time we played these guys.”

Luckily, the Cardinal have an array of offensive weapons at their disposal this year, including Heisman candidate Christian McCaffrey. The sophomore running back leads the FBS with 255.18 all-purpose yards per game. McCaffrey’s 389 all-purpose yards vs. Cal last week were the most by any FBS player on the season and he owns four of the 11 FBS 300 all-purpose yard outputs this year. Oklahoma State’s Barry Sanders is the NCAA single-season record holder for all-purpose yards/game (295.5), but an explosive showing against Notre Dame could help McCaffrey break his teammate’s father’s record.

The WildCaff is well-known, but another key offensive weapon for the Cardinal is fifth-year senior running back Remound Wright, who leads the nation in rushing attempts-to-touchdown ratio, finding the end zone once every 5.4 carries. Wright’s rushing touchdown total (19) is also tied for sixth-best nationally.  Despite the fact that Stanford will be without fullback Daniel Marx to create holes, the ground game is the way to go against a Notre Dame rushing defense that ranks only 68th in the nation and allows 168.0 yards per game.

Defensively, Stanford is a bit of a mixed bag. The Cardinal’s line has come together and only managed to give up 130 yards rushing on average per game, but the secondary has been shaky and will be without fifth-year senior cornerback Ronnie Harris, widely considered the team motivator and the leader against the pass. Sophomore cornerback Alijah Holder is uncertain at this time as well, leaving gaps in Stanford’s pass protection.

“They are a really good offense,” said fifth-year senior outside linebacker Kevin Anderson. “The O-line is probably the most physical and best group we have gone against. They’ve got some really good athletes as well and that quarterback is a great dual-threat quarterback. So it's going to be a challenge for us.”

On average, Stanford gives up 230 yards passing a game, but against Cal and its potent "Goffense", the Cardinal gave up 397 passing yards. Shaw is not worried though, and he had some words to say about that particular statistic.

“I’m the son of a defensive back coach, and a defensive coordinator and my dad says it all the time, the biggest misleading stat of all of them is passing yardage – it’s the most misleading thing there is,” griped Shaw. “I have no problem giving up 320 or 350 yards, that doesn’t matter. The rushing yards are a more telling stat than the passing yards for people that look at statistics.”

Statistics aside, Stanford really needs to come out swinging. Scoring a touchdown on its first possession of the game, something the Cardinal has only done three times this year (Oregon State, Washington, Colorado) would set the tone. Notre Dame starts fast, outscoring opponents 116-43 in the first quarter of games, so Stanford will need to work efficiently to keep up.

If the Cardinal can utilize its ground game, take advantage of every offensive possession, and get to Notre Dame’s quarterback, they should have no trouble taking home the coveted Irish crystal and California redwood Legends Trophy.