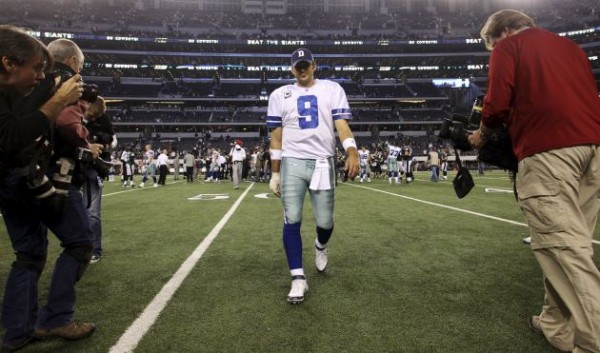 As a Dallas Cowboys fan, there are three things that you expect from your team. You should have a dominant running game, a fast but furious defense, and a quarterback that can take you to the promised land. As much as it pains me to say, today’s Cowboys team is lacking production from all of these areas.

It is no secret that the Dallas Cowboys have been in trouble the past few years. When you look at our storied history as of late, Tony Romo is a great option at the quarterback position. You can’t argue that he isn’t the best quarterback to wear the jersey since Troy Aikman retired, and if you think differently, then you don’t know the game well.

Although he was undrafted, there is not a throw in the playbook that Tony Romo can’t make. Romo is a Bill Parcells guy, and he garnered the trust of Bill who is now gone. Everyone thought that when Bill left, Romo would flourish. However, that has not been the case. In fact you, could argue that he led to the demise of the Wade Phillips era as head coach, and his lackluster play will probably be the undoing of Jason Garrett as head coach as well.

You have to wonder what happened to the wonder boy. When he took off, he and Terrell Eldorado Owens were like a well-oiled machine. They kept defenses on their heels and basically ran roughshod through the NFL. Everything was going well. Romo was winning come-from-behind games. He would pick up a fumbled snap that he should have lost 30 yards from and turn it into a 35-yard gain. He was dissecting defenses with his ability to run and throw. Everything was great until Romo lost his MOJO.

Romo’s MOJO was destroyed in the playoffs against Seattle. Romo had played a perfect game, but that one play has haunted his mystique for years now. That fumbled snap was the beginning of the end. Since then, Romo has been enigmatic. He is like two faces. Good Romo and bad Romo. When he is good, he is extremely good. He makes it look easy and effortless. But when he is bad, it gets magnified because it is usually going to decide the outcome of the game.

Putting the effect of that botched field goal snap in perspective is hard. You would think that a person would eventually climb out of the depths of the negativity and emerge as the true talent that he is by this point. However, it hasn’t happened to Romo. Since the botched snap, he appears as a man who has lost his cloak of invincibility and turned him into a mere mortal.

Dallas Cowboys fans have mixed emotions when it comes to Romo. He is a better option than Quincy Carter, Chad Hutchinson, Drew Bledsoe, Drew Henson and Vinnie Testeaerde, but at least you knew what to expect from those guys. The fact that Romo has the talent makes things worse because now he is expected by most to fail in the clutch.

When the game is on the line, you had best hang on tight when No. 9's got the ball in his hands. The highs are way high, and the dips are some doozies. Dallas' lightning rod of a quarterback really seems to like to keep both teams in the game at all times.

Sunday I witnessed a guy who can just make plays as he kept the Cowboys close against the Ravens. He made solid throws, and he also played well most of the game. He threw an interception before the half that led to a Ravens touchdown that really changed the momentum of the game. If he just throws that ball away, the Cowboys kick a field goal and possibly go into the half with nothing worse than a 13-13 tie.

When the game was approaching the end, Romo was hit or miss. I thought it was going to come together for the field general as the game was winding down this past weekend. It seemed like Romo was getting his mojo back. He completed big passes on fourth down throughout the drive and kept the chains moving.

When he hit Dez Bryant in the end zone, I was sure he was finding his mojo. Then when the two-point conversion failed, I was left wanting. The final drive was the icing on the cake. Romo came out and fired a couple of great passes to get the Cowboys in position to win despite the failed conversion earlier. Inside you just had the feeling that a big play was looming and Romo was going to get off the schneid. However, bad clock management and a missed field goal have us waiting to place the blame on number 9 once again. It’s too bad too because if he gets a win, it could have been a signal that Romo has his mojo back.

18 Replies to “Ride Or Die With Tony Romo”