With one tweet, Philadelphia Eagles fans didn't need to wait until May's NFL Draft to scream at someone.

Filed to ESPN: Bills have notified LB Kiko Alonso he is going to be traded to Philadelphia for RB LeSean McCoy. Trade official next week.

Head coach Chip Kelly, who also has final say over all team personnel decisions, brings in a familiar face (at least to him) in Kiko Alonso. The talented former Oregon Ducks linebacker was third in the NFL in tackles... in 2013. The runner-up to that season's Defensive Rookie of the Year missed all of 2014 after tearing his ACL while training last summer. For varied reasons, it's a little hard to say what kind of impact he will make on a team gunning for the Dallas Cowboys in the NFC East this coming season.

Yet, that's not why you're reading this. Like many who caught the news yesterday, you're wondering why would the Eagles trade 'Shady'. Why move the franchise's all-time leading rusher while he has some productive seasons ahead of him (McCoy turns 27 in July)? Why trade your lone consistent offensive performer when you largely still have questions to answer about the other ten men on the field? Is this so-called plan to grab Heisman Trophy-winner Marcus Mariota worth it? Is new Bills head coach Rex Ryan puffing on the fattest of cigars right now?

Well, guess what? We're still wondering ourselves as TSFJ's Eagles loyalists (as well as a non-Eagles loyalist) are attempting to sort it all out.

Another Risk with No Reward?

Two offseasons in a row, Chip Kelly cut ties with one of his most explosive offensive players. After year one at the helm, he flat-out cut DeSean Jackson after the brash wideout had his best professional season ever. And yesterday, he traded Pro Bowl running back LeSean McCoy, just one season removed from being the NFL's leading rusher. For a guy who has not won a single playoff game — though has won 20 games in his first two seasons — it's asking an awful lot.

In return for McCoy, the Eagles get a very talented, very young linebacker in Kiko Alonso, an area they were desperately in need of. In addition, it frees up even more cap space for Philadelphia, giving the Eagles perhaps the most flexibility of any team in the NFL.

On the surface, the deal seems crazy. Throw in Chip's propensity to bring in former Oregon Ducks, like Alonso, and the move isn't exactly the most popular in Philadelphia. It's doubly painful when losing a player everyone seemed to like and everybody definitely enjoyed watching play.

But running backs are a dime a dozen in the NFL, and the Eagles needed help at the linebacker position. If Alonso is healthy, he's one of the best the league, and at just 24, he could be an anchor for a long time. On top of that, the Eagles are in the best position of any would-be contender to make waves in free agency — and the draft. I'm not sure if I'm 100 percent sold on trading away so much talent every offseason, but if there was a team in the NFL who could afford to make such a bold move, it's the Philadelphia Eagles. - The Rev

We'll always have "The Snow Bowl." That was my first thought when Twitter told me that the Eagles had sent McCoy to Buffalo for Alonso.

McCoy, in the midst of a blizzard, gashed the Detroit Lions for a team record 217 yards. It was peak Shady. His cuts, feints, and dashes made the Lions' defensive players look like they were trying to roller skate on ice. The 34-20 win proved instrumental in getting the Birds to the playoffs in Chip Kelly's first year in charge. Rarely had the city been so optimistic as the sky fell around it.

Now looking back, what was that game really? A nice win in wintry conditions. It was memorable. It was also the regular season. One of the biggest drawbacks of following sports in a city that is championship-depraved is that few stars get their just due. The Broad Street Bullies retain their legendary status, and remain fixtures around town, because they won two Stanley Cups with a decidedly Philly style. Now we're seeing similar treatment for the 2008 Phillies. Ryan Howard, Jimmy Rollins, and especially Brad Lidge were forgiven for all their post-World Series follies.

The Eagles have had iconic players of that ilk. Brian Dawkins comes to mind. But with the exception of Brian Westbrook, none left the city on good terms. Not Dawk, not Donovan McNabb, not Randall Cunningham, and recently, not DeSean Jackson or Shady McCoy.

And so we have moments from the last decade and a half -- like the snow game, fourth-and-26, the second Miracle at the Meadowlands, and Eagles 44, Cowboys 6. But we lack the crowing achievement that makes these Birds all-timers.

We saw glimpses of McCoy, and we loved him. No matter how well this deal turns out, his tenure in green, regrettably midnight and not kelly, will feel a bit empty. - Dill

The life of a running back is a cruel one. It seems to consist of three phases:

The worst part is that phase three may happen by the time you're 30 years old. Running backs seem to be picked off the streets these days with zero loyalty or commitment to a player that runs as fast as he can, just to inch closer towards an injury or retirement with every carry.

Speaking of loyalty, is Chip Kelly loyal or not? If you answer with yes, you are correct in one sense only. The Eagles now have NINE players that spent their college days at the University of Oregon, and all nine played under Kelly at some point. So yes, Kelly has loyalty, but maybe with the wrong bird. Kelly has Duck loyalty, not Eagle. He's now cut his two best offensive players in back-to-back years, showing his NFL business side. Big Balls Chip fits his nickname once again by showing his cutthroat NFL side while sticking to his loyal college roots with former Ducks.  - Dalton 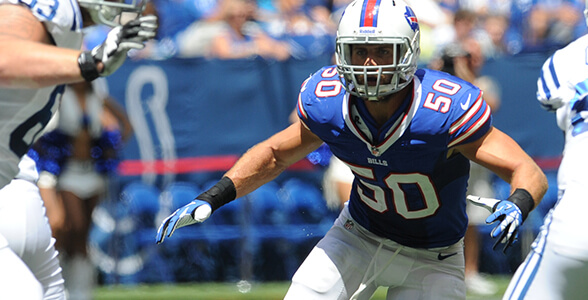 The sudden trade that has sent fan favorite and top running back LeSean McCoy to the Buffalo Bills for Kiko Alonso isn’t something that can be digested in one day. Truthfully any thoughts on the matter are all reactionary, and one can’t properly evaluate the deal until you see what comes from it. Free agency for the NFL hasn’t begun, so it is possible that this was simply a big part of an even larger sequence of events. Unfortunately for the Eagles, since there is no real indication that is actually the case, one can only speculate based off what we’ve seen so far.

From a business standpoint, it was obvious that LeSean McCoy’s time in Philly was on thin ice at best. This is the NFL, and moves made as they relate to the salary cap come with the territory. That is understandable. However, as many are pointing out, there was nothing keeping the Eagles from retaining Shady’s services for the contract both parties mutually agreed to in 2012. Parting ways with him obviously frees up a substantial amount of money, but keeping him with the cuts they’ve already made this offseason was still possible. The reality is he was no longer apart of their plans moving forward, much like DeSean Jackson a year prior. Again, this is how the NFL operates. Teams expect high performance and accountability from players, while offering none on their part.

As expendable as running backs seem to be, there is a reason why the elites at the position are still coveted. Your team is in much better shape with a Shady or Marshawn Lynch than it is with a Ryan Matthews. Just filling a roster spot with anyone does not mean lightning will strike. History alone shows that rarely ever happens no matter how well a team may draft. It’s not as if the Eagles were filled with depth at the position, but the most devoted Kelly disciples will have you believing McCoy was on the decline, overrated, and not worth the commitment. The idiocy of those that will use those points will say enough.

In fact, banking on the draft or free agency is nice when it serves to compliment a foundation already set in place. For all the praise the Eagles will hear for freeing up cap space, that space doesn’t exist without shedding the parts that made this team identifiable. Of course the Eagles have money to blow, the core roster has been gutted for parts that have yet to take shape. Judging things on paper is always a premature move at best, but as of now the paper for Philadelphia hasn’t even been filled out. There have been plenty of subtractions, and until the numbers start to replenish there is nothing to indicate this Eagles team is the team to beat in the NFC East.

The recurring theme especially in the NFL is that no one player is more valuable than the team. That same mentality should also be applied towards the coach. Just as the Eagles will be here long after McCoy, the same should be said for Kelly. Shady may not have been the essential piece for this franchise, but the jury is still out on the man running the show as well. His track record to date still leaves much to be desired, and should he stumble this season there will be no trusting the process. Coming up with future scenarios and theoretical advantages doesn’t translate if you’re selling bullshit and calling it gold. Perhaps something tangible will come from this, but until that indeed happens all we know is that there are some questions that need major answers. - Esau