What I remember most about Randy Moss is the ease with which he played football. This isn't meant to set up the ironic juxtaposition that so many modern commentators like – “If only life were as easy as football for this troubled man.” Of course, that statement fits Moss, but it's besides the point.

Moss was the most dominant player on every field he touched, and he did everything with such effortless grace. He covered yards where others covered feet. He leaped over defenders where others attempted to round them. The combination of speed and jumping ability gave Moss an illusory effect, like a plane flying across the sky. He was in perpetual slow motion moving at an otherworldly pace. And those hands; Moss rarely snatched at a ball or dove to make a catch. Instead, each pass settled into his palms in a way that contrasted the quarterback's gamble – throw it up for Moss. The call implied a level of desperation that was never there. Fans on the couch said it. My friends and I watching the 1998 NFC Championship game when we were eight and nine years old said it. Moss's coaches likely said it. His teammates surely did. Throw it up for Moss. Put it in his vicinity, and he will come down with the ball.

However, one image of Moss rises above the rest. When Marshall University or the Minnesota Vikings choose to immortalize Randy with a statue, his head should look straight ahead while his right arm is raised at a 90-degree angle. 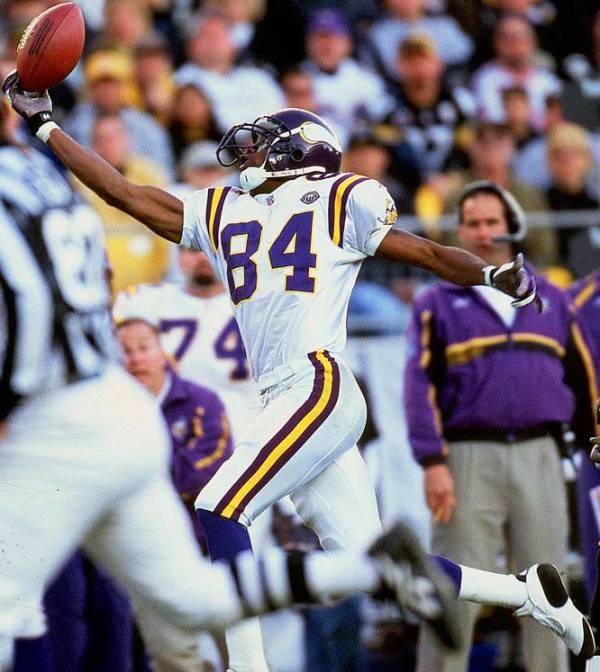 During ESPN's latest 30 for 30 “Rand University,” the sight of Moss flicking up his hand in a high school game gave me chills. It looked as simple as it was in the pros. The only difference was the absurdly large set of shoulder pads Moss wore. But the play – the hand, the deep ball, the catch – is timeless.

With Michael Kenneth Williams narrating, it was hard to not think of Omar, whom Williams portrayed in “The Wire,” swinging his shotgun in a dark alley, whistling “The Farmer in the Dell.” The hand raise was Moss's shotgun. The gasps of anticipation from the overflowing crowd were his soundtrack. Nothing, not the high-flying catches, nor the full-field sprints made in six strides, epitomized the simplicity of Moss, the ease of his dominance and the terror it inspired, quite like that right hand in the air.

The film's appeal to nostalgia, though, hinders Rand University's effectiveness. The viewer wants to see Moss at his best, while director Marquis Daisy wants to explain him at his worst.

To do that, Daisy must introduce Rand, West Virginia, one of two central figures in the film along with Moss himself. The quote that made the rounds on Twitter Tuesday night came from Sam Singleton Jr., a former teammate of Moss, who explains that friend Bobbie Howard was a straight-edged youth — “He didn't drink, smoke weed or go out with white girls.”

Singleton's casual tone tells you much of what you need to know about the setting. Alcohol, drugs and breaches of the color barrier were taboo.

“All three years I got into a racial fight,” Moss says of his time at DuPont High School. His last one sent him to prison instead of Notre Dame.

Perhaps that best describes Moss's path. It was always going to be one or the other for the football star.

“You got a fork in the road,” Moss says early in the film, “You goin' left or you goin' right, where I decided to go right, but I was about to go left.”

Left would have landed him in Rand University, the local name for the collection of residents who congregate at the local 7/11. Singleton characterizes the group as “has-beens,” a point reiterated by another interviewee. “None of our athletes took that next step,” he says. Asked how to change that, the man responds, “If I knew, I would do it.”

But does he mean it? That seems to be the question Daisy is really asking. It's a sad commentary on a small town tucked in a forgotten part of the country. Rand's residents would rather be has-beens with lost potential, former all-stars, than men with no story to tell. At least they have an identity at Rand University. Think of Marlon Brando's famous line in “On The Waterfront.” “I coulda been a contender, I coulda been somebody, instead of a bum.”

It's cliché to say, but Moss's contemporaries in Rand see themselves in him. His rise to super-stardom affirms their beliefs in a way that's not necessarily bad. The quote that closes the Film says as much. “The legacy that Randy has here in Rand, West Virginia,” an interviewee says, “I think is big enough that you could say that we took Rand and just added a Y to it.”

That's not hyperbole. Moss put Rand on the map without losing his roots. His tribulations in his college years only further endeared him to his childhood friends who never left the town.

“If you're not from Rand, West Virginia, it's hard for me to trust you.” -- Moss

Daisy seeks the “why” of that statement and for the most part finds it. Moss is a complicated character from a modest home, a Greek god in the backwoods. How close was he really to enrolling in Rand University? Closer than we might believe, Daisy suggests and Moss confirms.

The film, however, leaves much to be desired. One problem is length. Sixty minutes is hardly enough time to explore the complexities of Moss or his hometown. Could Daisy have talked to Moss's mother, the greatest influence in his life? Could he have found a white friend of Moss's to further break down the racial structure of the community? Bomani Jones, an executive producer, told TSFJ on Saturday that Jason Williams declined a sit-down interview. So, at least in part, not all went according to plan.

I also found myself wondering about the testaments to Moss's character. It seems every on-screen speaker praises Moss, whether it was his high school coach, his coach at Marshall Bob Pruett, Lou Holtz or Bobby Bowden.

Pruett in particular gushes. Randy loves to compete. Randy hates to lose. How, then, do we reconcile that attitude with his forgettable Oakland Raiders years?

Therein lies another problem. We know too much about Moss going in, and it distracts from Daisy's endeavor. Again, this isn't the director's fault. When you tackle a star as immense as Moss, you won't please every viewer. Including, apparently, me.

And yet, there's so much to love as well. The subtleties of the film add to its poignancy, from old clips of Moss in a Notre Dame hat answering questions about his legal issues to his desire to escape the spotlight of the Heisman Trophy presentation with the aid of sunglasses. People have called for a part twom and Jones hinted at one via Twitter.

Thanks to Daisy, we know so much more about Moss and his existence. In the difficult path he traversed to football immortality there were two constants: Rand, West Virginia, and that raised right hand. The latter, as we found out, was the only certainty in Moss's career.

Related: The Versus Podcast - Bomani Jones vs. Ed The Sports Fan (The Randy Moss Episode)

One Reply to “30 for 30's Rand University: The Challenge To Define Randy Moss”